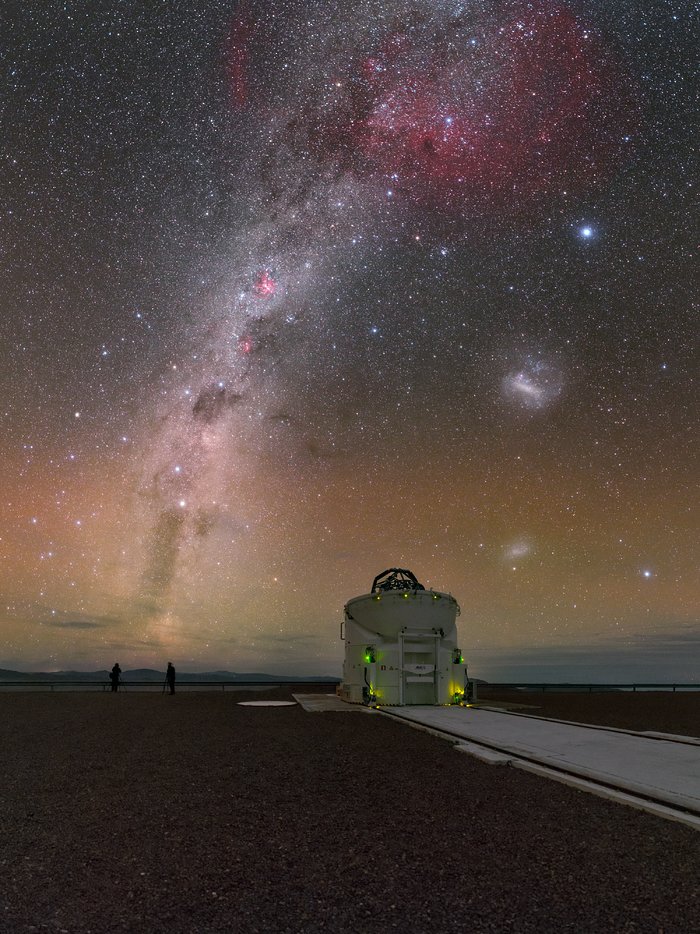 This beautiful photograph of the southern sky was taken by ESO Photo Ambassador Petr Horálek from ESO’s Paranal Observatory in Chile. Petr was not alone at Paranal. Standing to the bottom left of the image, next to an Auxiliary Telescope of the Very Large Telescope Interferometer (VLTI), are astrophotographers Yuri Beletsky and Babak Tafreshi, both of whom are also Photo Ambassadors for ESO. The duo are seen beneath a sky filled with stunning phenomena.

The bright, dominant band of the Milky Way cuts across the sky, with the Gum Nebula (Gum 12) appearing at the top of the frame in red. The Large Magellanic Cloud, a satellite galaxy of the Milky Way, is an especially bright blotch to the centre right — just below Canopus, the brightest star in both this view and the southern constellation of Carina. A beautiful green and reddish shimmer is also visible at the bottom of the image, seemingly rising up from the horizon. This phenomenon is known as airglow and consists of faint light emitted by the Earth's atmosphere. Airglow prevents the night sky from being completely dark, and is explained in detail in ESOcast 78.