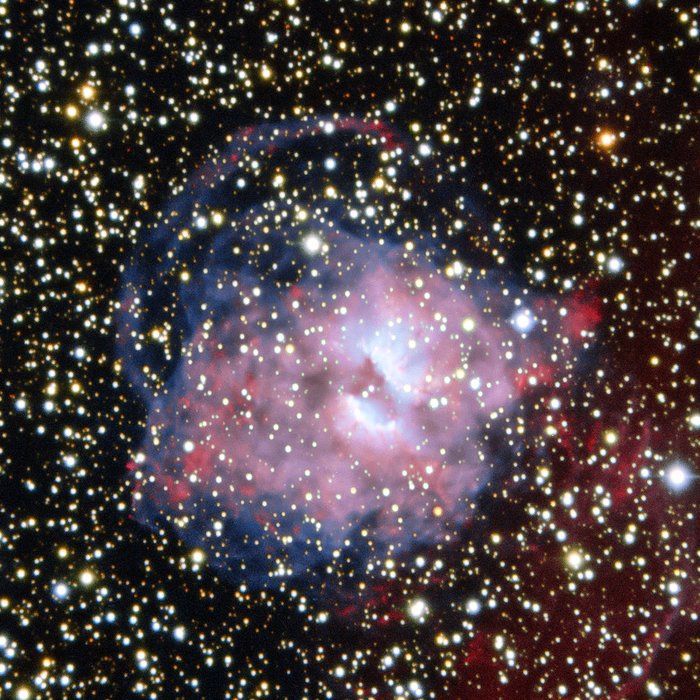 This fetching cloud of gas was imaged by the ESO Faint Object Spectrograph and Camera (EFOSC2) at ESO's La Silla Observatory. It can be found nestled in the busy constellation of Centaurus in the skies of the southern hemisphere.

The cloud of gas — named NGC 3699 — is a planetary nebula, It is distinguished by an irregular mottled appearance and a dark rift, which roughly bisects it.

These objects, despite the name, have nothing to do with planets and are created in the final stages of the evolution of stars similar in mass to the Sun. The name "planetary nebula" arises from the time of their discovery by William Herschel, when they appeared in the telescopes of the time as rounded objects similar in looks to the planets.

Towards the end of their lives, stars like the Sun exhaust the supply of hydrogen in their cores, putting a stop to nuclear reactions. This causes the star's core to contract under the force of gravity and heat up, while the cooler outer layers expand tremendously — the surface of the Sun, for example, will likely engulf the orbit of Earth when it reaches this stage in its evolution. Unusually strong stellar winds push the gaseous outer layers of the star out into space, eventually exposing the core of the star, which begins to emit ultraviolet radiation, ionising the expelled gas, causing the nebula's ethereal glow, and producing beautiful and varied sights, such as the one in this image.