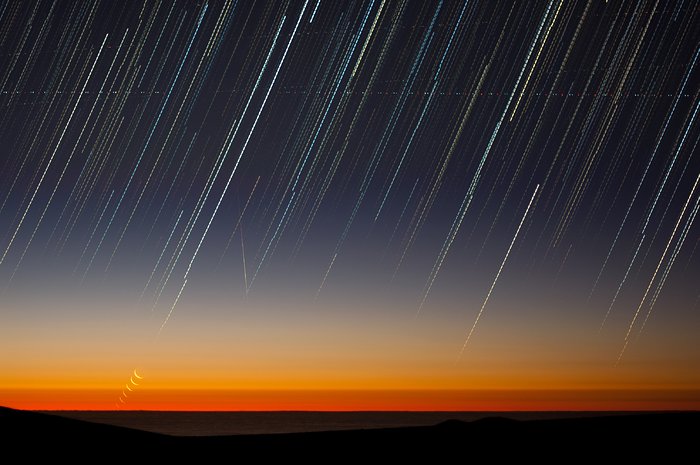 This striking new image shows ESO’s Paranal Observatory in Chile soon after sunset. The last rays of the day create a spectacular orange haze as they pass through the dusty lower levels of the atmosphere, setting a perfect scene for this picture of the week.

In this long exposure image we can see star trails caused by the movement of stars across the sky as the earth rotates. These tracks look a little like dotted lines, an effect caused by combining a number of individual shots taken with short gaps in between. The crookedness at the bottom of the star trails is due to the camera moving out of place.

The path of the crescent Moon can also be seen towards the lower left of the frame as it slowly sets, appearing to sink into the Pacific Ocean. The moon is not trailed as it was taken with a series of very short exposures.

In the centre of the image a meteor is visible as a vertical streak, and the blinking lights of various planes can be seen tracking horizontally across the streaked sky.

This image was taken by ESO Photo Ambassador Gabriel Brammer soon after sunset on January 5, 2011. At the time Gabriel worked as an astronomer at the La Silla-Paranal Observatory, but is currently an astronomer supporting the Hubble Space Telescope at the Space Telescope Science Institute in Maryland, USA. This image was one of Brammer’s first ever night shots of Paranal, and remains one of his favourites.