Wings for science fly over APEX 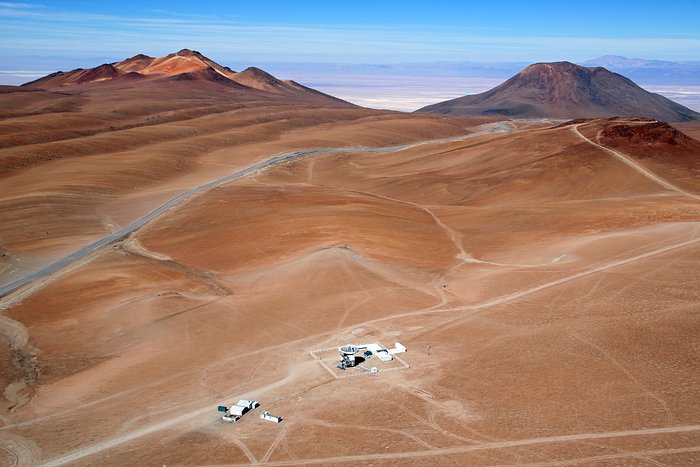 High on the Chajnantor Plateau in Chile’s Atacama region, at a breathtaking altitude of 5100 metres, ESO operates the  Atacama Pathfinder Experiment telescope, APEX. APEX is a pathfinder for ALMA, the Atacama Large Millimeter/submillimeter Array, a revolutionary new telescope that ESO, together with its international partners, has built close to APEX on the Chajnantor Plateau. APEX is based on a prototype 12-metre antenna constructed for the ALMA project, and it is finding many targets that ALMA will be able to study in greater detail.

This spectacular aerial image was taken in December 2012 by Clémentine Bacri and Adrien Normier, the two crew members of the non-profit organisation ORA Wings for Science project, who are flying a special eco-friendly ultralight aeroplane on a year-long journey around the world. While on route, they help out scientists with aerial capabilities ranging from air sampling to archaeology, biodiversity observation and 3D terrain modelling.

ESO has an ongoing outreach partnership with ORA Wings for Science project. Short movies and amazing pictures that are produced during the flights will be used for educational purposes and for promoting local research. Their circumnavigation started in June 2012 and finished in June 2013 with a landing at the Paris Air Show.