Ripples across the Chilean sky 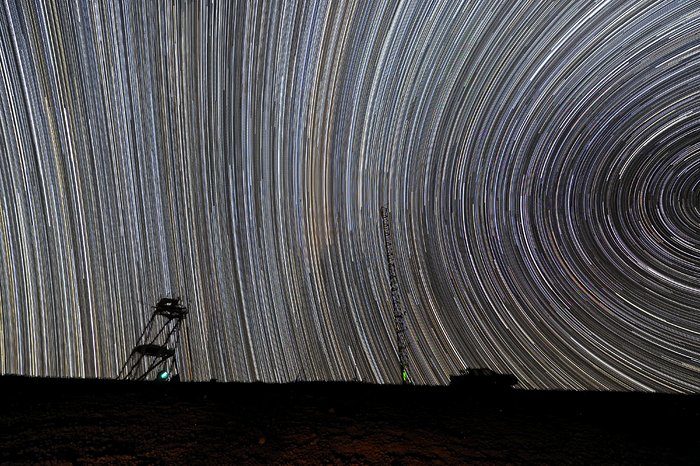 At first sight, this mesmerising image might look like the waves caused by a stone thrown into a lake. And yet, this is the result of the apparent motion of the stars through the southern sky and some magic performed by the photographer. The image was taken at Cerro Armazones, a mountain peak 3046 metres above sea level, which lies in the central part of the Atacama Desert, in the Chilean Andes.

The long bright stripes are star trails and each one marks the path of a single star across the dark night sky. By leaving the camera’s shutter open for a long period of time, the movement of the stars, imperceptible to the naked eye, is revealed. Exposure times of as little as 15 minutes are long enough to do the trick. In this case, the photographer combined many shorter exposures to form the final image. The very wide-angle lens used for this series shows the celestial pole to the right, and the equator just above the short tower.

The amazingly large number of star trails in this picture also reveals the incredible quality of the night sky at Armazones: the atmosphere is extremely clear and there is no light pollution thanks to the mountaintop’s remote location. This is one of the reasons why this mountain was chosen to be the future home of the world’s biggest eye on the sky: the upcoming European Extremely Large Telescope (E-ELT).