Wings for science fly over ALMA 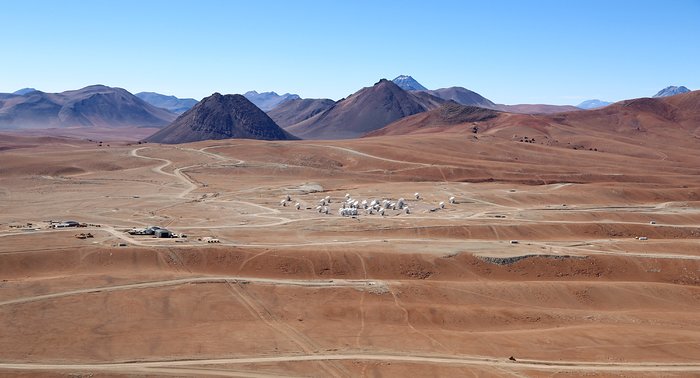 This beautiful image, taken in December 2012, shows the array of antennas of the Atacama Large Millimeter/submillimeter Array (ALMA) [1], the largest astronomy project in existence, located at the Chajnantor Plateau in the Chilean Andes. The large antennas are 12 metres in diameter, and the smaller ones, gathered together in the middle of the image, form the ALMA Compact Array (ACA), which is made up of 12 antennas with a diameter of 7 metres. When the array is completed, there will be a total of 66 antennas.

ESO has initiated an outreach partnership with the ORA Wings for Science project, a non-profit organisation which offers aerial support to public research while on a year-long journey around the world. The two crew members of the Wings for Science Project, Clémentine Bacri and Adrien Normier, fly a special environmentally friendly ultralight [2] to help out scientists by providing aerial capabilities ranging from air sampling to archaeology, biodiversity observation and 3D terrain modelling.

The short movies and amazing pictures that are produced during the flights are used for educational purposes and for promoting local research. Their circumnavigation started in June 2012 and will finish in June 2013 with a landing at the Paris Air Show.

[2] The ultralight aircraft is a NASA-award winning Pipistrel Virus SW 80 using only 7 litres of fuel per 100 kilometres — less than most cars.