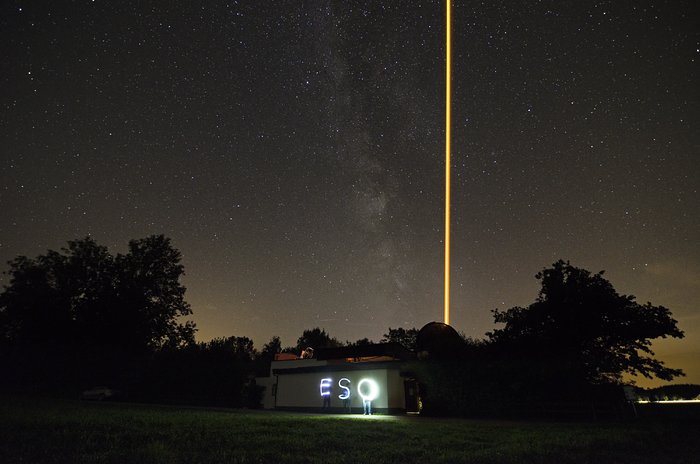 On a clear night in Bavaria, ESO staff attended the filming of an ESOcast episode focusing on ESO’s new compact laser guide star unit, seen here in action at the Allgäu Public Observatory in Ottobeuren, Germany. Using the glow from their mobile phones, staff took advantage of the long-exposure photograph to draw the letters “ESO” in light, while standing in front of the observatory. Just left of the vertical laser beam, the Milky Way can be seen. Just above the horizon over the observatory, the dotted tracks of aircraft can be seen in the distance. The laser has a powerful beam of 20 watts, and to protect pilots and passengers a no-fly zone around the observatory was created by the Deutsche Flugsicherung (responsible for air traffic control in Germany) during the nighttime observing hours.

ESO’s innovative concept uses a powerful laser whose beam is launched with a small telescope, combined into a single modular unit which can be mounted directly on a large telescope. The concept, which has been patented and licensed by ESO, will be used to provide the Very Large Telescope (VLT) with four similar laser units. It will also play a key role in the units that will equip the future European Extremely Large Telescope (E-ELT).

At the time of filming, the unit was undergoing testing before being shipped to the ESO Paranal Observatory in Chile, home of the VLT.