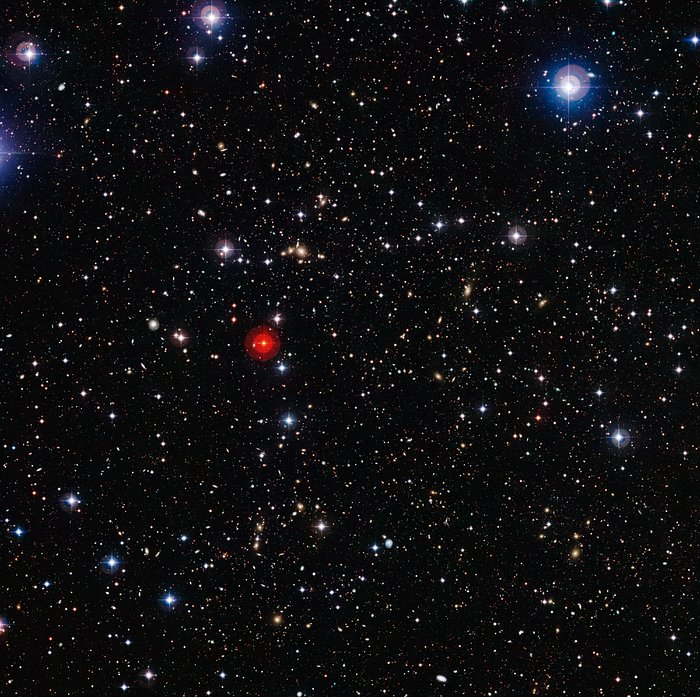 This deep-field image shows what is known as a supercluster of galaxies — a giant group of galaxy clusters which are themselves clustered together. This one, known as Abell 901/902, comprises three separate main clusters and a number of filaments of galaxies, typical of such super-structures. One cluster, Abell 901a, can be seen above and just to the right of the prominent red foreground star near the middle of the image. Another, Abell 901b, is further to the right of Abell 901a, and slightly lower. Finally, the cluster Abell 902 is directly below the red star, towards the bottom of the image.

This image was taken by the Wide Field Imager (WFI) camera on the MPG/ESO 2.2-metre telescope, located at the La Silla Observatory in Chile. Using data from the WFI and from the NASA/ESA Hubble Space Telescope, in 2008 astronomers were able to precisely map the distribution of dark matter in the supercluster, showing that the clusters and individual galaxies which comprise the super-structure reside within vast clumps of dark matter. To do this, astronomers looked at how the light from 60 000 faraway galaxies located behind the supercluster was being distorted by the gravitational influence of the dark matter it contains, thus revealing its distribution. The mass of the four main dark matter clumps of Abell 901/902 is thought to be around ten trillion times that of the Sun.

The observations shown here are part of the COMBO-17 survey, a survey of the sky undertaken in 17 different optical filters using the WFI camera. The COMBO-17 project has so far found over 25 000 galaxies.