The long and winding road* 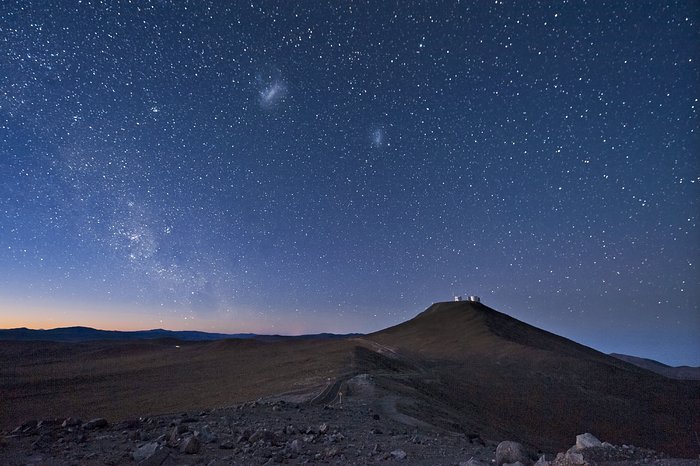 This splendid picture shows the European Southern Observatory's Very Large Telescope (VLT) on Cerro Paranal in the Chilean Atacama desert. The mountaintop, 120 km south of the town of Antofagasta, is a remote haven for scientific exploration.

Its distance from populated areas means that light pollution is essentially non-existent, which helps to guarantee clear views for the telescopes. It also ensures that activity is not disturbed by other human activities, such as traffic on nearby roads or dusty air from mines. The desert location means that moisture in the atmosphere is at a very low level, which contributes to the excellent atmospheric conditions. As well as the VLT, Paranal Observatory is also home to the VISTA telescope on an adjacent peak, from which this photograph was taken. The road which links the two peaks can be seen in the centre of the image, winding through the desert landscape.

The two distinct bright patches seen here in the night sky are the Large and Small Magellanic clouds, which are neighbouring galaxies to the Milky Way, about 160 000 and 200 000 light-years away respectively. The path of the Milky Way itself can be seen on the left of the image. Astronomers use the VLT to study our own galaxy, the neighbouring Magellanic Clouds, and naturally also much more distant galaxies billions of light-years from Earth. On the long and winding road to the stars, observatories like the VLT are our first steps.