Shooting a laser at the Galactic Centre 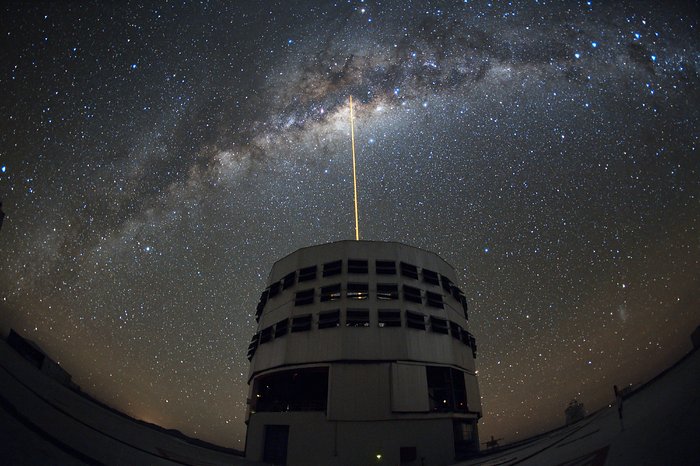 This impressive image, taken on 10 May 2010 by ESO astronomer Yuri Beletsky, beautifully depicts the sky above Paranal. One of the 8.2-metre telescopes of ESO's Very Large Telescope, Yepun, Unit Telescope 4, is seen against the wonderful backdrop of the myriad of stars and dust that makes up the Milky Way. A laser beam is coming out of Yepun, aiming perfectly at the Galactic Centre. When used with the adaptive optics system the artificial star created by the beam allows the telescope to obtain images and spectra that are free from the blurring effect of the atmosphere. When this image was taken, astronomers Stefan Gillessen and Hauke Enkel were using the SINFONI instrument, together with the laser guide star facility, to study the centre of our Milky Way, where a supermassive black hole is lurking.

The field of view of the image is very wide, about 180 degrees. One of the 1.8-metre Auxiliary Telescopes used for interferometry can be seen on the right.