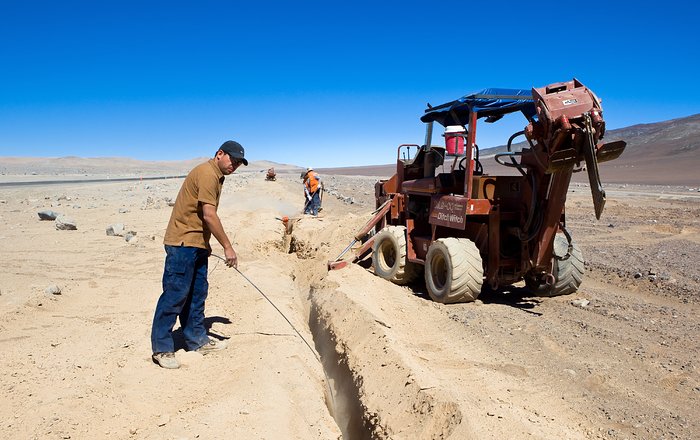 Alongside the B-710 road, between the Paranal airstrip and the turn-off to Cerro Armazones in the Chilean Atacama Desert, a crew is hard at work laying a fibre data cable. The cable will connect the observatories at Paranal (ESO) and Armazones (OCA) with the main scientific data backbone in South America, bridging the gap between these remote outposts and the scientific community thirsty for their data.

This new cable, laid down by ESO, is part of the EVALSO (Enabling Virtual Access to Latin-American Southern Observatories) project that aims to create an entire high-speed data infrastructure between these two astronomical sites in Chile and the rest of the scientific and academic community.

Once completed, the high-speed interconnectivity will be from the Santiago area,  via the main Chilean backbone along the Panamerican Highway, to the ESO site on Cerro Paranal, which houses the Very Large Telescope (VLT) and to Cerro Armazones, currently housing OCA and the baseline site for the planned 40-metre-class European Extremely Large Telescope (E-ELT).

EVALSO will make use of the infrastructure of REUNA (the Chilean academic network) and CLARA/ALICE (the Latin American academic networks interconnection) and will assume the transit of the data through the European federal research network infrastructure (DANTE/GEANT) and the European national research and education networks. A strong relationship with Latin American partners and the academic world is planned.