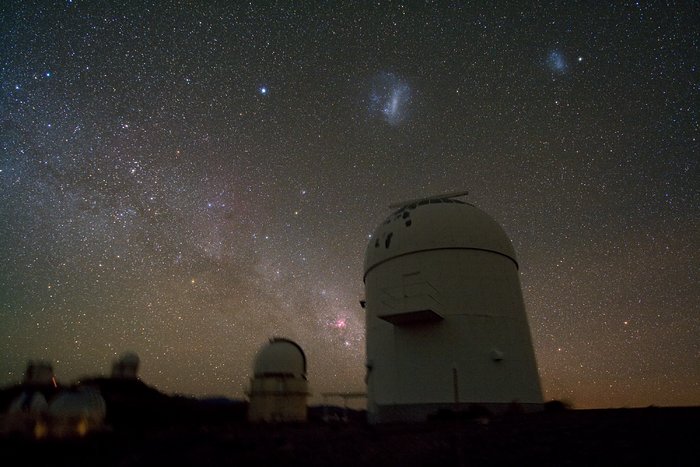 This view of ESO’s La Silla Observatory reveals the splendour of the night sky and shows several of the domed telescopes located at the site. The glowing band of the plane of the Milky Way Galaxy slants through the sky from the upper left to the lower middle, where the now closed GPO (Grand Prism Objectif) dome, which also hosted the Marly 1-metre telescope, looms in the foreground, together with the Danish 1.54-metre telescope. The ghostly, bluish objects above the GPO’s dome are two galaxies belonging to the Milky Way’s close neighbourhood and known as the Large and Small Magellanic Clouds.

La Silla’s collection of domed telescopes also includes the ESO 3.6-metre telescope, home to HARPS (High Accuracy Radial velocity Planet Searcher), the world’s foremost exoplanet hunter, and the 3.58-metre New Technology Telescope, which broke new ground for telescope engineering and design, and was the first in the world to have a computer-controlled main mirror (active optics), a technology developed at ESO and now applied to most of the world’s current large telescopes. La Silla is one of the most scientifically productive ground-based facilities in the world after ESO’s Very Large Telescope (VLT) observatory, both of which are located in northern Chile’s Atacama Desert.