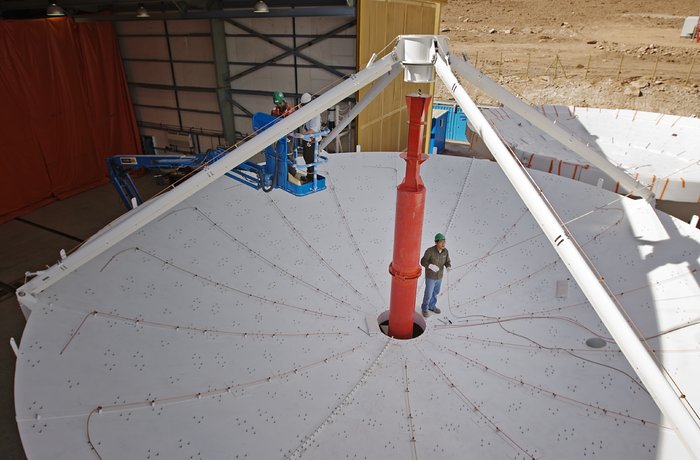 In this photograph taken on 18 August 2009, a European ALMA antenna takes shape at the observatory's Operations Support Facility (OSF). ALMA, the Atacama Large Millimeter/submillimeter Array, is a revolutionary astronomical telescope, comprising an array of 66 giant 12-metre and 7-metre diameter antennas observing at millimetre and submillimetre wavelengths. The telescope is being built on the breathtaking location of the Chajnantor plateau, at 5000 metres altitude in the Chilean Andes. The OSF, at which the antennas are being assembled and tested, is at an altitude of 2900 metres. ESO has contracted with the AEM (Alcatel Alenia Space France, Alcatel Alenia Space Italy, European Industrial Engineering S.r.L., MT Aerospace) Consortium for the supply of 25 of the 12-metre diameter ALMA antennas, with options to increase the number to 32. ALMA is a partnership of Europe, North America and East Asia in cooperation with the Republic of Chile.