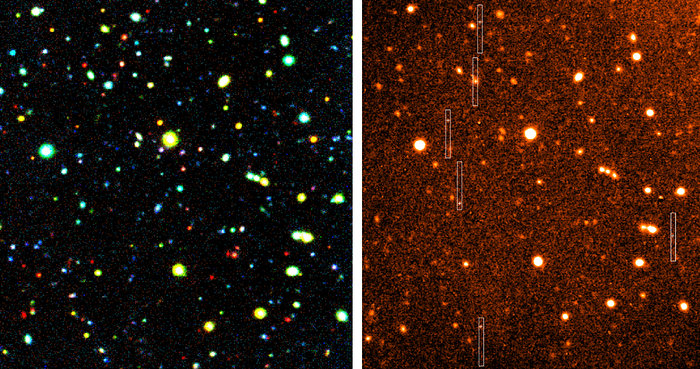 The left half of the image shows a true-colour rendering of an area of the Hubble Deep Field South measuring 2.25 x 2.5 arcmin 2. It is the result of a combination of exposures in seven different wavebands from the ultraviolet to the infrared spectral region (U, B, V, R, I, J, H and K), obtained at the ESO New Technology Telescope (NTT) during the EIS survey. The total exposure times were 5, 1.8, 3.4, 1.5, 2.4, 3, 1 and 3 hours, respectively. To the right is a direct image in red light (R-band) of the same field obtained with FORS1 at the VLT UT1; the exposure time was 300 sec. It was taken in order to align the slits of the spectrograph, some of which are outlined in this image. The exact positions of the selected target objects are marked with crosses within the slits.