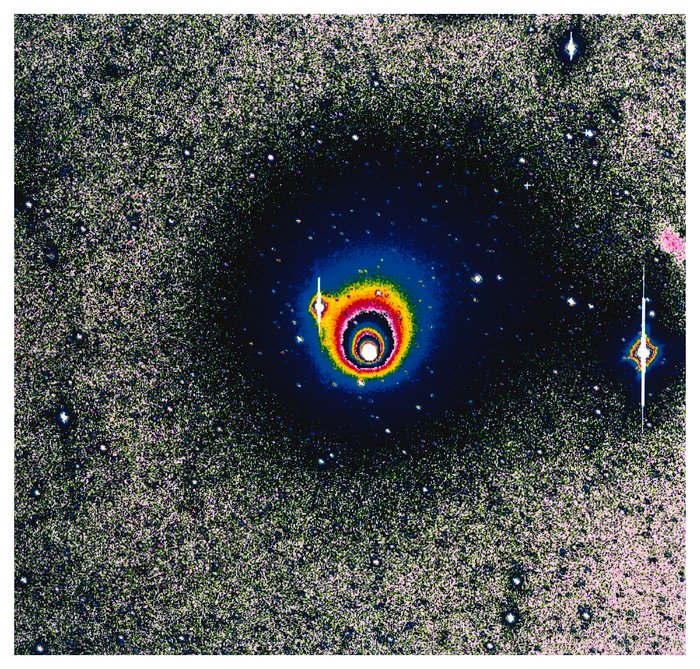 This false-colour image of Comet Hale-Bopp is the first to be obtained with a major astronomical telescope after the recent conjunction with the Sun. At the time of this observation, the comet was located in the southern constellation of Sagittarius, and only 32 degrees from the Sun. This rather difficult observation was performed with the ESO 3.5-metre New Technology Telescope (NTT) in the morning of 9 February 1996 by Griet van de Steene (astronomer), Hernan Nunez (telescope operator) and Gabriel Martin (instrument operator) of the NTT team at La Silla. The data were immediately transferred by satellite link to the ESO Headquarters in Garching where the subsequent image processing was done by Hans Ulrich Kaeufl. Since the comet was so close to the Sun, it had to be observed in the comparatively bright morning sky. It was acquired only 10 degrees above the eastern horizon, at an airmass of no less than 5.1. Three exposures of 5 minutes each were made through a red filtre and with a 2000 x 2000 CCD in the EMMI multi-mode instrument. The image shown here is based on one flat-fielded 5-min exposure. The frame covers 9 x 9 arcmin; 1 pixel = 0.27 arcsecond; North is up and East to the left.