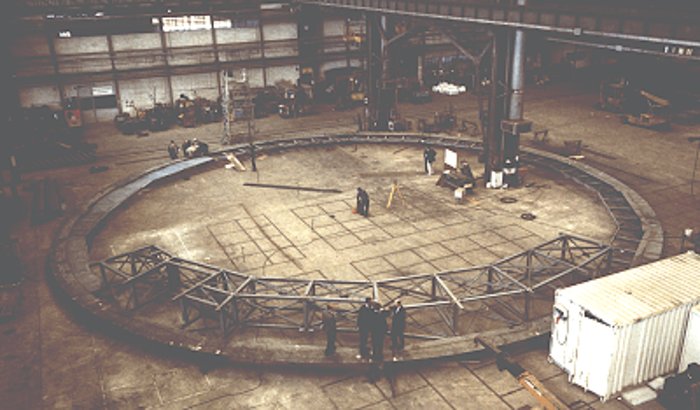 This photo shows the preassembly of the upper ring of the fixed part of the enclosure for the 8.2-metre
Unit Telescope of the ESO Very Large Telescope (VLT). It was taken in mid-September 1994 at the IDROMACCHINE company in Mestre near Venice (Italy), where this structure has been under construction
during the past year.

The steel ring measures about 28 metres in diameter; its position in the enclosure can be seen on ESO PR
ESO Press Photo eso9414-3 (a white-clad person to the right walks on it). It provides a platform that will give direct
access to the instruments at the Nasmyth focus of the telescope via the inner extensions seen in the
foreground.

After further tests in Europe, the first parts of this enclosure (with a total weight of approx. 100 tons) will now be shipped to the VLT site at Paranal in Chile. It is planned that they will leave the Italian port of Genova in early October 1994 and arrive at the port of Anatofagasta, 130 km North of Paranal, in late November. From here the transport will be by truck along the Panamerican Highway and up the mountain on the 12-metre wide road, just constructed for this purpose. The erection at Paranal will begin in mid-December 1994.