The Rho Ophiuchi star formation region, where hydrogen peroxide has been detected in space (annotated) 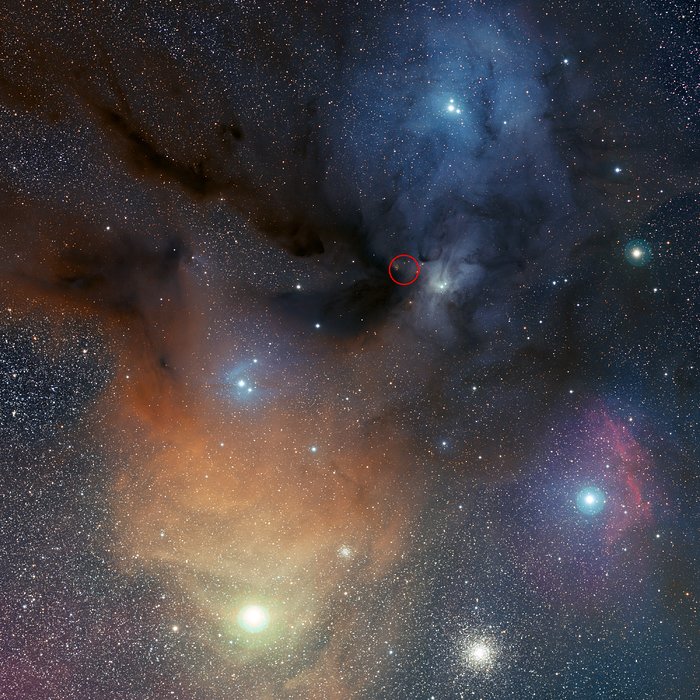 The colourful Rho Ophiuchi star formation region, about 400 light-years from Earth, contains very cold (around -250 degrees Celsius), dense clouds of cosmic gas and dust, in which new stars are being born. The clouds are mostly made of hydrogen, but contain traces of other chemicals, and are prime targets for astronomers hunting for molecules in space. Astronomers using the APEX telescope to observe this region discovered hydrogen peroxide molecules in interstellar space for the first time, in the area marked with the red circle.

This is also a rich region for amateur observations. Rho Ophiuchi itself is the bright star near the top of the image. The bright yellowish star in the bottom left is Antares, one of the brightest stars in the sky. Below and to Antares’ right is the globular cluster Messier 4.

This image of the region was obtained from the Paranal Observatory by observing with a 10-cm Takahashi FSQ106Ed f/3.6 telescope and a SBIG STL CCD camera, using a NJP160 mount. Images were collected through three different filters (B, V and R) and then stitched together. It was originally created as part of ESO’s Gigagalaxy Zoom project.