The “meal” of Centaurus A 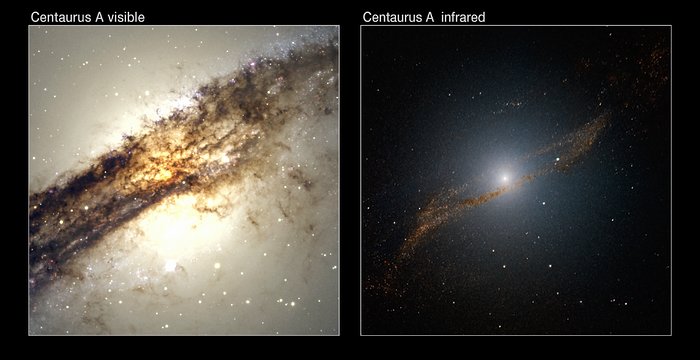 Comparison between a visible-light image (left) of Centaurus A, as seen with the FORS2 instrument on the Very Large Telescope (VLT), and a near-infared view (right) obtained with the SOFI instrument on ESO’s New Technology Telescope, at La Silla. Centaurus A (NGC 5128) is the nearest giant, elliptical galaxy, at a distance of about 12 million light-years. Between 200 and 700 million years ago, this galaxy is believed to have consumed a smaller spiral, gas-rich galaxy — the contents of which appear to be churning inside Centaurus A’s core, triggering new generations of star birth. The SOFI image was specially processed to look through the dust, providing a clear view of the centre and revealing a previously unknown ring of stars and clusters. The field of view is about 4 x 4 arcminutes.