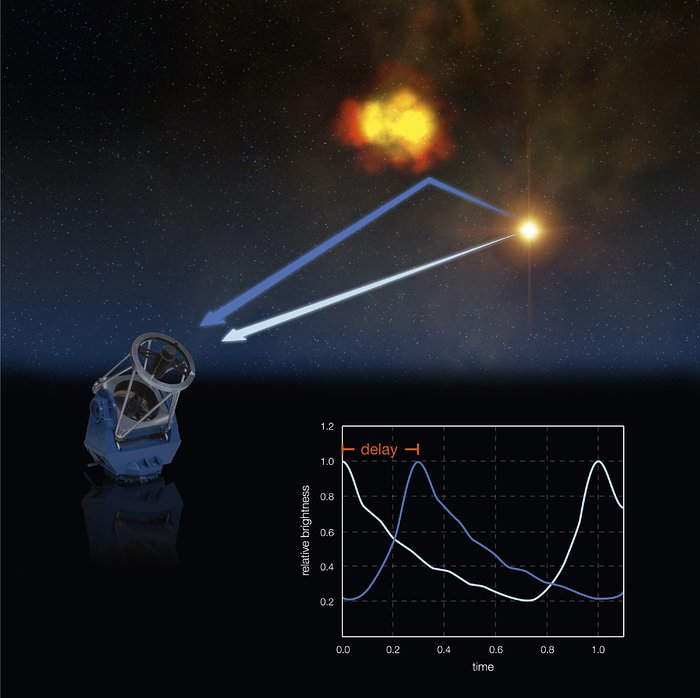 Taking advantage of the presence of light echoes, a team of astronomers have used an ESO telescope to measure, at the 1% precision level, the distance of a Cepheid — a class of variable stars that constitutes one of the first steps in the cosmic distance ladder.

The determination of the distance to RS Pup, following the method of the American astronomer Robert Havlen, is based on the measurement of the phase difference between the variation of the star and the variation of isolated nebular features. Because the luminosity of the star changes in a very distinctive pattern, the presence of the nebula allows the astronomers to see light echoes and use them to measure the distance of the star. The light that travelled from the star to a dust grain and then to the telescope arrives a bit later than the light that comes directly from the star to the telescope. As a consequence, if we measure the brightness of a particular, isolated dust blob in the nebula, we will obtain a brightness curve that has the same shape as the variation of the Cepheid, but shifted in time. This delay is called a 'light echo', by analogy with the more traditional echo, the reflection of sound by, for example, the bottom of a well.

By monitoring the evolution of the brightness of the blobs in the nebula, the astronomers can derive their distance from the star: it is simply the measured delay in time, multiplied by the velocity of light (300,000 km/s). Knowing this distance and the apparent separation on the sky between the star and the blob, one can compute the distance of RS Pup.

This artist's illustration is not to scale.