The disk around Iota Horologii 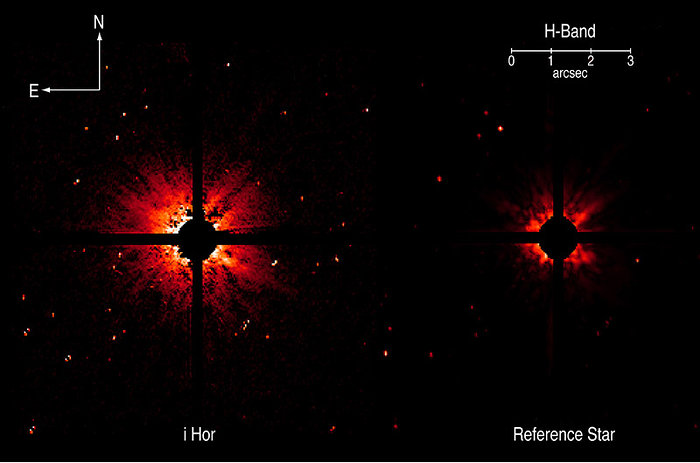 This image displays a dusty disk around the star iota Horologii (left) as compared with that of a "reference" star (right). At a distance of 56 light-years from Earth, Iota Horologii was already known to possess an extrasolar planet. The discovery of the disk may help to better understand how this exoplanetary system was formed. The observations were obtained with the ADONIS adaptive optics instrument at the ESO 3.6-metre telescope on La Silla. The strong stellar light in the central area of the two images has been blocked with an instrumental mask. While the image processing still leaves some unavoidable stray light around the reference star (mostly due to reflections within the instrument), a much brighter, diffuse disk around iota Horologii is clearly visible.

Technical information: The intensity scale ranges from 0.1 (deep red) to 100 (white) mJy/arcsec 2 (surface brightness). The diameter of the mask is 1.0 arcsec, corresponding to 17 AU (2550 million km) at the distance of iota Horologii (56 light-years). The images are based on 150 integrations of 4 seconds each, i.e. a total exposure time of 10 min. The observing conditions were excellent (0.6 arcsec seeing) and the achieved image resolution by the adaptive optics system (approx. 0.11 arcsec) is near the best possible (the "diffraction limit") at this wavelength (H-band at 1.64 µm).