The Milky Way Shines on Paranal 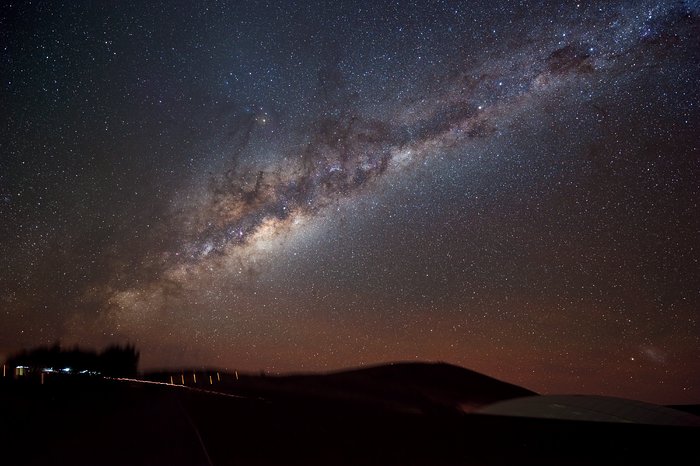 The Milky Way blazes above the European Southern Observatory (ESO) facilities at Mount Paranal in northern Chile’s Atacama Desert. Paranal hosts the world’s most advanced ground-based astronomical observatory, the Very Large Telescope (VLT), and is home to two new telescopes for large imaging surveys currently under construction, the VLT Survey Telescope (VST) and the Visible and Infrared Survey Telescope for Astronomy (VISTA). Both are expected to “take up duty” in the 2009-2010 timeframe.

This photograph shows an edge-on view of the Milky Way’s glowing plane slicing across the night sky, laced by bands of dust and dark gas. Taken with a digital camera using a three-minute exposure, the photograph also reveals a bit of action on the ground. To the left, a vehicle with its parking lights on stops lets out a passenger. Though bathed by the light of the Milky Way, the high-altitude desert remains quite dark. To illuminate the rightward path to the underground entrance ramp of the ‘Residencia’, where staff and visitors stay, the passenger takes along a small flashlight, seen as a squiggly bright line. In the lower right, the glass dome on the Residencia’s roof reflects the starry sky overhead. One of our Milky Way’s galactic satellites, the Large Magellanic Cloud, is seen hanging above the Residencia in the lower right corner of the image.