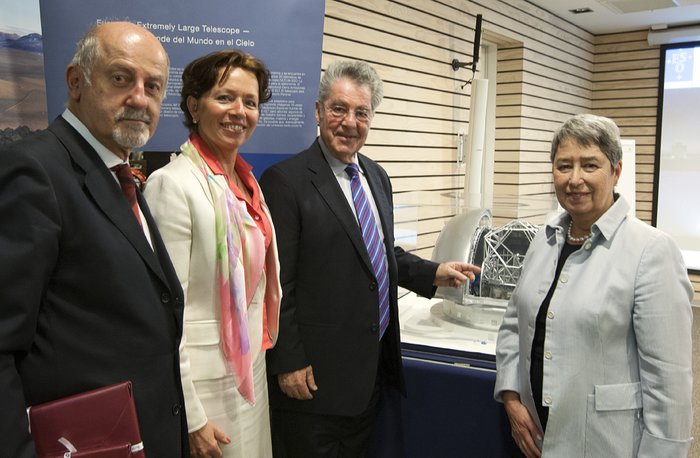 On 6 December 2012 the Federal President of the Republic of Austria, Dr Heinz Fischer and his wife Margit Fischer, visited ESO’s premises in Santiago, Chile. The President was accompanied by Dorothea Auer, Austrian Ambassador to Chile and Friedrich Faulhammer, Secretary General of the Austrian Ministry of Science and Research. They were joined by several other Austrian government officials as well as a scientific and cultural delegation.

This picture shows, from left to right, ESO’s Representative in Chile, Massimo Tarenghi; Ambassador Dorothea Auer, from the Austrian Embassy in Santiago; Dr. Heinz Fischer, Federal President of the Republic of Austria and Margit Fischer, wife of the President. They are photographed next to a model of the E-ELT. Austrian industry has already made significant contributions to the E-ELT project and Austria voted in favour of the project in June 2012.