First Light for UT2 Achieved Ahead of Time

This has been a busy, but also a very successful and rewarding week for the European Southern Observatory and its staff. While "First Light" was achieved at the second 8.2-m VLT Unit Telescope (UT2) ahead of schedule, UT1 produced its sharpest image so far. This happened at a moment of exceptional observing conditions in the night between March 4 and 5, 1999. During a 6-min exposure of the majestic spiral galaxy, NGC 2997, stellar images of only 0.25 arcsec FWHM (full-width half-maximum) were recorded. This and two other frames of nearly the same quality have provided the base for the beautiful colour-composite shown above. At this excellent angular resolution, individual star forming regions are well visible along the spiral arms. Of particular interest is the peculiar, twisted shape of the long spiral arm to the right.

The official inauguration of the Paranal Observatory took place in the afternoon of March 5, 1999, in the presence of His Excellency, the President of the Republic of Chile, Don Eduardo Frei Ruiz-Tagle, and ministers of his cabinet, as well the Ambassadors to Chile of the ESO member states and many other distinguished guests. The President of the ESO Council, Mr. Henrik Grage, and the ESO Director General, Professor Riccardo Giacconi, were the foremost representatives of the ESO organisation; most members of the ESO Council and ESO staff also participated. A substantial number of media representatives from Europe and Chile were present and reported - often live - from Paranal during the afternoon and evening.

The guests were shown the impressive installations at the new observatory, including the first and second 8.2-m VLT Unit Telescopes; the latter having achieved "First Light" just four days before. A festive ceremony took place in the dome of UT2, under the large telescope structure that had been tilted towards the horizon to make place for the numerous participants. After an introductory address by the ESO Director General, speeches were delivered by the President of the ESO Council and the President of Chile.

The speakers praised the great achievement of bringing the very complex, high-technology VLT project this far so successfully and also the wonderful new opportunities for front-line research with this new facility. This would not have been possible without excellent cooperation between the many parties to this project, individuals as well as research institutes, companies and governments, all working towards a common goal.

The ceremony was concluded with a discourse on "Understanding the Universe" by Physics Nobel Prize winner, Professor Carlo Rubbia, former Director of CERN.

At the end of the day, the President of the ESO Council, the ESO Director General and the Heads of Delegations had the opportunity to witness an observing session with the UT1 from the VLT Control Room. The 300 other guests followed this event via internal video broadcast.

Mapuche names for the Unit Telescopes

It had long been ESO's intention to provide "real" names to the four VLT Unit Telescopes, to replace the current, somewhat dry and technical designations as UT1 to UT4. Four meaningful names of objects in the sky in the Mapuche language were chosen. This indigeneous people lives mostly in the area south of Santiago de Chile.

An essay contest was arranged in this connection among schoolchildren of the Chilean II Region of which Antofagasta is the capital to write about the implications of these names. It drew many excellent entries dealing with the rich cultural heritage of ESO's host country.

The jury was unanimous in its choice of the winning essay. This was submitted by 17-year old Jorssy Albanez Castilla from Chuquicamata near the city of Calama. She received the prize, an amateur telescope, during the Paranal Inauguration.

Henceforth, the four Unit Telescopes will be known as ANTU (UT1; pronounced an-too ; The Sun), KUEYEN (UT2; qua-yen , like in "quake"; The Moon), MELIPAL (UT3; me-li-pal ; The Southern Cross) and YEPUN (UT4; ye-poon ; Sirius), respectively. An audio sequence with these names pronounced by a native speaker is available below:

Following the installation of the main mirror in its cell and a 20-hour working session to put the complex secondary mirror and its support in place, the UT2, now Kueyen , achieved (technical) first light in the morning of March 1, 1999, when an image was obtained of a bright star. It showed this telescope to be in good optical shape and further adjustments of the optical and mechanical systems are expected soon to result in some "astronomical" images.

The announcement of this important event was made by the ESO Director during the opening session of the VLT Symposium that was held in Antofagasta during March 1-4, 1999.

This meeting attracted over 250 scientists from all over world. It provided a most useful opportunity to discuss future scientific programmes with the VLT and other large telescopes. The participants were left with the impression of mounting expectations, just four weeks before the first VLT Unit Telescope, Antu (UT1), will receive the first visiting astronomers.

Despite the extensive preparations for the Paranal Inguration and the VLT Symposium, excellent progress is being made during the final tuning of Antu (UT1) and its instruments for the "hand-over" to the astronomers on April 1, 1999. This involves exposures in many different modes and of different sky regions.

Another impressive photo is shown here that was obtained some nights ago. It displays a sky area near the Chamaeleon I complex of bright nebulae and hot stars in the constellation of the same name, close to the southern celestial pole.

[1]: The photos in this Press Release were prepared at Paranal immediately following the Inauguration event and have only been subject to minimal image processing. To reduce the file size, the high-resolution versions carry no identifying text. 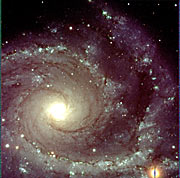 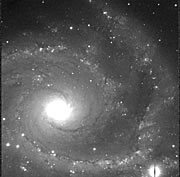 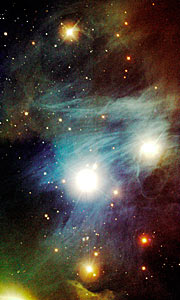