As the construction of the ESO Supernova Planetarium & Visitor Centre here in Garching continues apace, ready for its opening in late 2017, ESO continues to make an unprecedented range of high-quality materials available for use in planetariums, produced by world-renowned astrophotographers, artists, technicians and musicians.

Both the mission and vision of the ESO Supernova emphasise the creation of connections and learning experiences for both scientists and the general public; in keeping with this, and with ESO’s ethos in general, all of these planetarium products are available for free. Quality comes before quantity, but thanks to the dedicated work of both our team and the planetarium community at large, we are able to offer both.

The full range of free material for planetariums is available on the ESO Supernova website. This comprises:

We are confident that this collection will contribute to the continued success of the planetarium community which we at ESO Supernova are so proud and excited to be a part of. If you in turn want to help sustain a continued production of free resources for planetariums and keep the ESO Supernova free you can:

The Klaus Tschira Stiftung (KTS) was created in 1995 by the physicist and SAP co-founder Klaus Tschira (1940 – 2015). It is one of Europe’s largest privately funded non-profit foundations. The Foundation promotes the advancement of the natural sciences, mathematics, and computer science, and strives to raise appreciation for these fields. The Foundation’s commitment begins in kindergarten and continue in schools, universities, and research facilities. The Foundation champions new methods of scientific knowledge transfer, and supports both development and intelligible presentation of research findings. The ESO Supernova is a donation from the KTS, and ESO will run the facility.

The Heidelberg Institute for Theoretical Studies (HITS gGmbH) was established in 2010 by the physicist and SAP co-founder Klaus Tschira (1940-2015) and the Klaus Tschira Foundation as a private, non-profit research institute. HITS conducts basic research in the natural sciences, mathematics, and computer science, with a focus on the processing, structuring, and analyzing large amounts of data. The research fields range from molecular biology to astrophysics. The shareholders of HITS are the HITS Stiftung, which is a subsidiary of the Klaus Tschira Foundation, Heidelberg University and the Karlsruhe Institute of Technology (KIT). HITS also cooperates with other universities and research institutes and with industrial partners. The base funding of HITS is provided by the HITS Stiftung with funds received from the Klaus Tschira Foundation. The primary external funding agencies are the Federal Ministry of Education and Research (BMBF), the German Research Foundation (DFG), and the European Union. 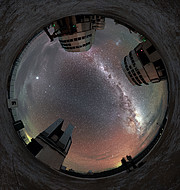 PR Image ann16058a
Lined up
Send us your comments!
Subscribe to receive news from ESO in your language
Accelerated by CDN77
Terms & Conditions