Particle accelerators: the next generation

The particle accelerators used for research in high-energy physics are among the largest and most expensive scientific instruments ever built. They are like giant microscopes that have allowed us to discover the fundamental laws of the Universe —from the Big Bang, to the Standard Model of particle physics, and even to the actual structure of the cosmos.

In order to continue exploring new areas of physics with particle accelerators, scientists are now investigating new ways to make them not only more powerful, but also smaller. In the very promising plasma wakefield accelerators, "wake waves" are generated in an ionised gas (plasma). Electrons and positrons, their antiparticles, can “surf” that wake and be accelerated to speeds corresponding to over 1000 times the energy that they could get from current particle accelerators. The final aim is to reduce the distance required for to accelerate the particles, leading to much smaller— and cheaper — accelerators.

What: The next generation of particle accelerators
When: Tuesday, 8 October 2013, 19:00 until approximately 20:30
Where: Vereinsheim, Occamstr. 8, 80802 Munich, near Münchener Freiheit 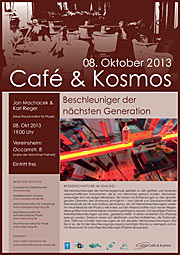