HETDEX: A look into the nursery of the Universe

At the next Café & Kosmos evening on Thursday 19 September 2013 we will join Dr. Maximilian Fabricius (Max Planck Institute for Extraterrestrial Physics) for a discussion about the HETDEX (Hobby-Eberly Telescope Dark Energy Experiment) project at the McDonald Observatory in Texas.

The large-scale distribution of galaxies in the Universe is not random. Instead, there is a typical scale — a typical average distance between galaxies — that can be used to study how the Universe expands over time.

HETDEX is using the 9.2-metre telescope of the McDonald Observatory in Texas to search for a certain type of galaxies that can be observed over very large distances. In this way HETDEX can examine the expansion of the Universe at a time when it had just a quarter of its present size.

Dr. Fabricius will explain the objectives and discuss how the preparations for this experiment are proceeding.

The series of Café & Kosmos discussions is organised jointly by ESO, the Excellence Cluster Universe and the Max-Planck Institutes for Physics, Astrophysics and Extraterrestrial Physics. 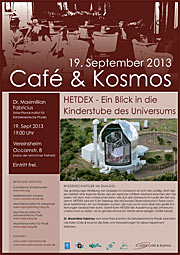