Aerial Pictures from ALMA in Operation

The full magnitude of the ALMA Observatory is revealed in these spectacular new images of the antenna array, surrounded by snow on the Chajnantor Plateau in northern Chile. The images were recently captured using a camera mounted on a hexacopter.

The flight, which is being registered as a Guinness World Record for multi-rotor aircraft at high altitude, was achieved thanks to the remote-controlled aircraft’s lightweight carbon fibre platform. The hexacopter, which has six sets of rotors, also features autonomous functions that assist with navigation and allow the aircraft to return to its point of departure in the event of signal loss.

"Before we arrived at the ALMA site there was no record of such a device flying so high. The low atmospheric pressure means that the lift from the propellers is greatly reduced," states photographer Ariel Marinkovic, who led the photography session.

The only solution was to reduce the hexacopter’s weight by as much as possible. To achieve this, the frame and landing gear were removed, and replaced by a lighter structure, and a tiny camera of just 200 grams was selected, reducing the total weight by 1.2 kilograms.

But there was another challenge: the freezing temperatures (around -3 degrees Celsius at 5000 metres above sea level, where the ALMA antennas are located) could lead the hexacopter to lose up to 70% of its power capacity. To avoid this, a coat made out of thermal fabric and aluminium was installed around its batteries.

"It was a real gamble: the hexacopter was designed to fly about 4500 metres lower than the altitude of the ALMA high site. Calculations suggested that it wouldn’t be possible to take off," recalled Marinkovic. Nonetheless, he felt it was worth a try: "in a previous journey to 4200 metres above sea level, I saw seagulls, and I thought that a bird wouldn’t fly in a place where it needs to use 90% of its energy just to find its next meal."

That reasoning turned out to be correct and images of ALMA were successfully taken.

This event recalled the origin of Chajnantor’s name, which for the Atacameño people — the original inhabitants of the region — meant "Place of Departure".

PR Image ann13064b
ALMA about to be imaged from a hexacopter 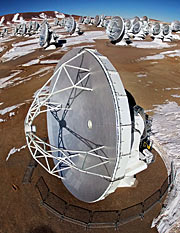 PR Image ann13064d
ALMA about to be imaged from a hexacopter
Send us your comments!
Subscribe to receive news from ESO in your language
Accelerated by CDN77
Terms & Conditions