The European Astronomical Society (EAS) has created a new award to honour astronomers of outstanding scientific distinction. The award is named after Professor Lodewijk Woltjer, one of Europe’s outstanding astronomers of the second half of the twentieth century, and ESO Director General from 1975 till 1988. Under his leadership ESO established itself as one of the world’s leading astronomical institutes, and took the decision to build the Very Large Telescope, the world’s most advanced visible-light astronomical observatory.

Professor Woltjer will give the first Lodewijk Woltjer Lecture at the opening session of the European Week of Astronomy and Space Science — JENAM 2010 on Monday, 7 September 2010, in Lisbon, Portugal. 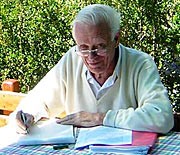 PR Image ann1020a
Professor Lodewijk Woltjer, ESO Director General from 1975 till 1988
Send us your comments!
Subscribe to receive news from ESO in your language
Accelerated by CDN77
Terms & Conditions