A Muse for the Very Large Telescope

The first components for the Multi Unit Spectroscopic Explorer (MUSE), a second generation instrument for ESO’s Very Large Telescope (VLT), are beginning to arrive. MUSE is an innovative 3D spectrograph with a wide field of view, providing simultaneous spectra of numerous adjacent regions in the sky. Such spectrographs are efficient explorers of the Universe in three dimensions (two for the on-sky positions, and one for the wavelengths). Poised to become a unique and powerful tool for discovering objects that cannot be found in imaging surveys, MUSE, which is based on a number of innovative technological developments, is bringing these advantages to a level never achieved before.

“After many years of hard work, it is with great satisfaction that we see this dream becoming reality,” says Roland Bacon, who is leading the development of this instrument. “The MUSE concept, with its serial production of not just one, but 24, 3D spectrographs, is new in optical astronomy and it constitutes a key experience in view of the next generation of instruments, both for the VLT as well as for the proposed European Extremely Large Telescope.”

MUSE combines 24 spectrographs in order to be able to probe a field of view as large as possible. High optical efficiency is maintained with image slicers, a new technology, and MUSE is using the largest image slicers ever used in astronomy. Each spectrograph is equipped with 4000 x 4000 pixel detectors — the largest detectors used at ESO.

Between the end of 2009 and beginning of 2010 two important MUSE milestones were achieved: 24 high performance detectors were delivered to ESO by e2v and the first of 24 3D spectrographs was delivered by Winlight Optics to the team at the CRAL (Lyon, France) where it was completely assembled with the detector and fully tested. The resulting spectra confirmed the superb image quality of the spectrograph as well as the proper working of the system. “This means we can now give the go-ahead for the serial production of the next 23 spectrographs at the optics manufacturer Winlight,” says Luca Pasquini, from ESO.

In parallel, at ESO, the full cryogenic system, which will handle the 24 detectors and their cryostats, was assembled and successfully tested. After completion of some further tests, it will be shipped to CRAL for the final integration of the instrument.

Distant galaxies appear tiny when observed from Earth, and their images are blurred by the Earth’s atmosphere, making their study highly challenging. MUSE will use an innovative adaptive optics system that will correct for the perturbations due to the atmosphere in real time. The performance of MUSE should thus allow the detection of galaxies that appear a hundred million times fainter than the faintest stars observable with the unaided eye.

Started in 2004, the instrument will see its first light in 2012 at the VLT site (Paranal) in Chile. “This will be the beginning of a concerted hunt for young and distant galaxies, the goal being to attack the fundamental questions of the early stages of galaxy formation and evolution,” says Bacon. “But MUSE will also be an efficient tool with which to tackle astrophysical problems in many other fields.”

For instance, the MUSE consortium plans to study the environment of supermassive black holes, which are assumed to be present in most galactic nuclei, as well as to examine in great detail the stellar populations of nearby galaxies. The MUSE spectrograph will of course also be opened to the ESO scientific community at large. 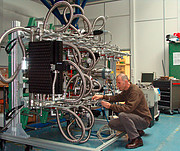 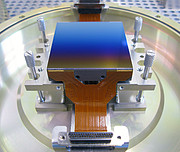 PR Image ann1012d
The large format MUSE detector
Send us your comments!
Subscribe to receive news from ESO in your language
Accelerated by CDN77
Terms & Conditions