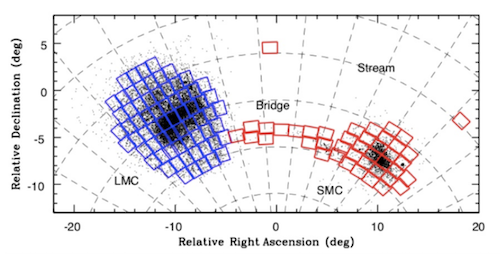 The VISTA Magellanic Survey (VMC) led by Principal Investigator Maria-Rosa Cioni aims to determine the spatially resolved star formation history and the three-dimensional geometry of the Magellanic Cloud system. The sensitivity in Y, J and Ks filters has been designed to reach sources below the oldest main-sequence turn-off point of the stellar population and through the multi-epoch coverage to measure accurate Ks mean magnitudes for pulsating variable stars like RR Lyrae and Cepheids. Data Release 5 (DR5), published on 01 Aug 2019, provides the complete set of observations covering the Small Magellanic Cloud field (~40 square degrees), it also includes tiles from the bridge (~20 square degrees) and the stream (3 square degrees) for a total of 42 VMC survey tiles.

DR5 includes data taken between Feb 2010 and Nov 2016, providing both newly released observations and updated versions of previously released data for the mentioned area, which have been reprocessed by CASU with a newer version of the pipeline (v1.5) with improved photometric calibration. In total, there are 1075 individual tile images (one per observation) in addition to their corresponding pawprints and source lists. Each survey tile has at least two observations in Y and J and 11 in Ks.

Data can be browsed and downloaded from the ESO Science Portal or programmatically. A more detailed description of the release can be found in the accompanying documentation.