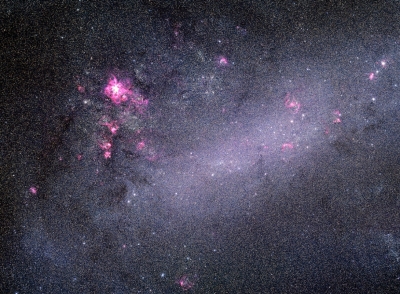 The VISTA Magellanic Survey (VMC) aims at the determination of the spatially resolved star formation history and three-dimensional geometry of the Magellanic system, reaching sources below the oldest main-sequence turn-off with multi-epoch Ks mean magnitudes for pulsating variable stars. This new data release (DR4) is based on observations of twelve survey fields covering a total of about 18 square degrees, acquired between November 2009 and August 2013, with at least three visits per field in Y and J filters and 12 in Ks.

The data can be browsed and downloaded from the ESO Science Archive Facility using the Phase 3 query form. VMC catalogues can be queried individually or conjoined using the ESO Catalogue Facility query interface. More information about VMC DR4 is available in the associated release description.