Call for Observing Proposals for Period 94 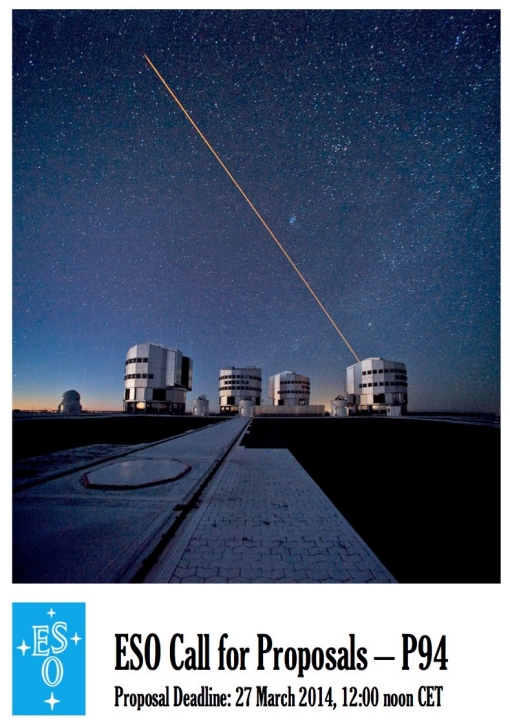 Please consult the Call for Proposals document for the main news items and policies related to applying for time on ESO telescopes. All technical information about the offered instruments and facilities is contained on ESO webpages that are linked from the Call. The proposal deadline is 12:00 CET Thursday 27 March 2014.

The second-generation VLT instrument, MUSE, is undergoing commissioning and will likely be offered for the first time in Period 94.
HAWK-I is offered again on UT4, NACO is offered on UT1 and CRIRES has been removed in preparation for a significant upgrade.
KMOS will be unavailable for approximately one month during Period 94.
MIDI, AMBER and the VLTI Visitor Instrument are available until the start of preparatory activities related to the second-generation VLTI instruments.
On APEX, SABOCA will be replaced by the new 350 micron camera, ARTEMIS. The following PI instruments are also offered on APEX in Period 94: CHAMP+ (620-720 and 780-900 GHz), FLASH (345 and 460 GHz) and SUPERCAM (329-360 GHz).