IMPORTANT: ESO is now offering use of the web application p2 for Phase 2 preparation for all Paranal observing runs from Period 102 onward.  The web application p2 fully replaces the use of P2PP for the preparation of the Phase 2 observing material for all telescopes/instruments for both Service and Visitor Mode runs on Paranal. Please check our help section about p2 for instructions on how to notify ESO when your material is ready.

To start preparing your Phase 2 material including observation blocks, instructions, and finding charts with the web application p2, we recommend you familiarize yourself first with the creation of individual OBs and concatenations for your instrument using the instrument-specific p2 tutorials and references therein first:

Below we then follow the creation of an example of a group of concatenations for imaging.

For the sake of this tutorial, we will use the p2 demo facility at https://www.eso.org/p2demo, as we do for the individual instruments above (more information therein).

2: Creating a group of concatenations for VLTI imaging

In this tutorial we prepare a group of SCI/CAL concatenations of the Mira variable star S Orionis (Simbad coordinates RA (2000) = 05 29 00.893, Dec (2000) = -04 41 32.75, proper motions RA -11.57 mas/year, Dec -11.34 mas/year) using the small, medium, and large VLTI baseline configurations, with the goal of reconstructing an image of this source. This is the same source that is used in the GRAVITY p2 tutorial to create a SCI/CAL concatenation, so that here we do not repeat the details of the different templates.

2.2 Creating the group container in p2

Select the folder corresponding to the GRAVITY tutorial run, 60.A-9252(M) by clicking on the + icon next to it.  In this tutorial we assume that time was allocated in Service Mode.  This is indicated by the small wrench icon that appears next to the RunID.  "Inside the run" you will see (at least) one folder, called "GRAVITY Tutorial", and one folder "Nested Container Tutorial". The latter folder contains the final product of the tutorial you are now reading. You can refer to the contents of that folder at any time, perhaps to compare against your own work. There may be other folders are OBs visible, as this account is a public account and used for testing by other people as well.

In the p2 demo you must first start by creating a folder, within which you will put your own content.You can create a folder by clicking on the icon New Folder. Please notice that a folder named by default New Folder will appear at the bottom of the list of items in the run. Because the p2 demo is on-line and accessible to anyone you may see folders belonging to other people here, though after-the-fact clean-up is encouraged and possible.

Your screen should look like this after you pressed the "New Folder icon: 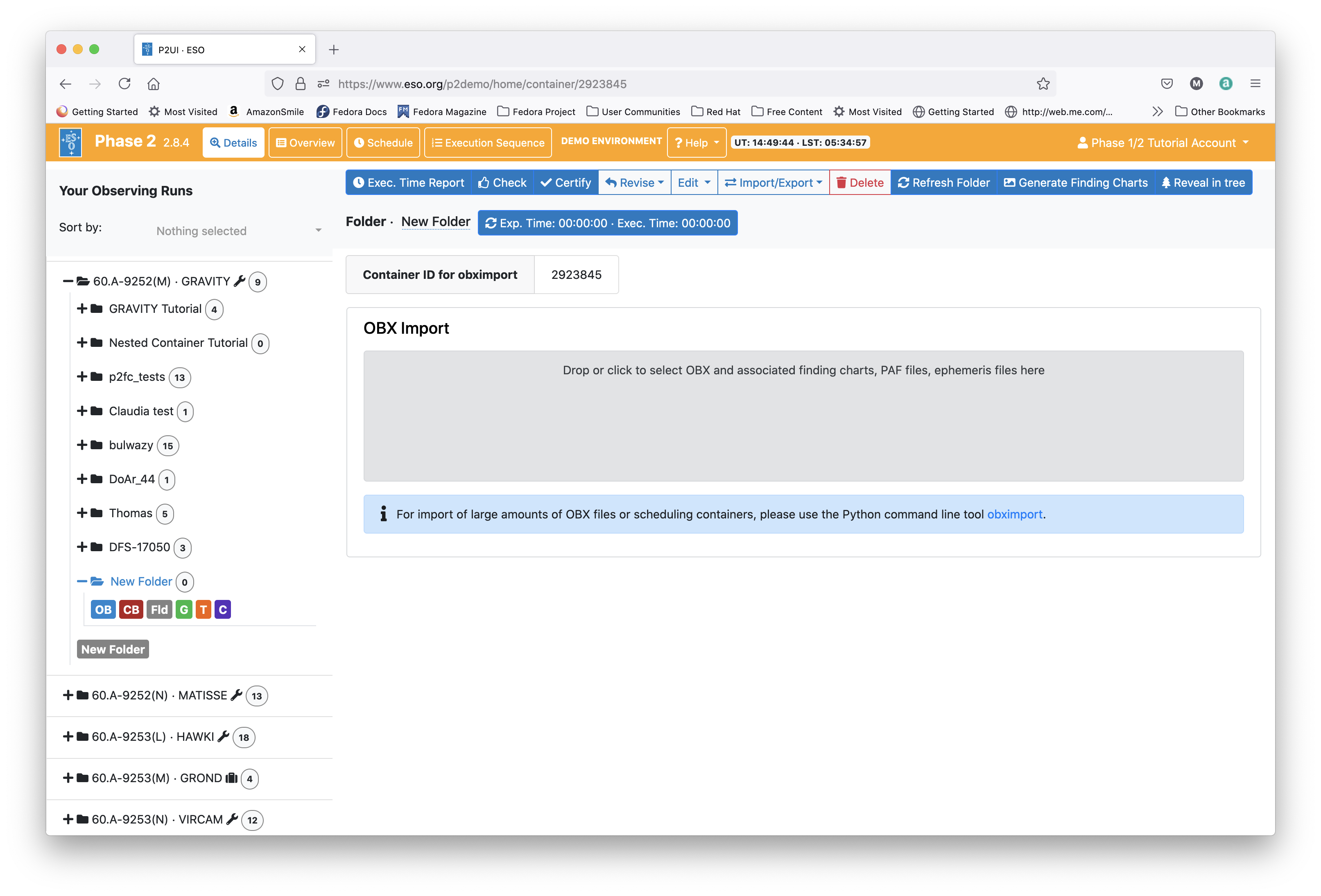 You can give the folder a new name by clicking on the blue 'New folder' text on the top, in this tutorial the name will be "my first folder", but you can set the name of your folder to be (almost) anything you like. Select and open your new folder by  clicking on the + icon next to it.

This creates an empty container of type group in your folder. Again, as for the folders, type a name for your group container, such as "Image of S Ori". Your window should then look like this: 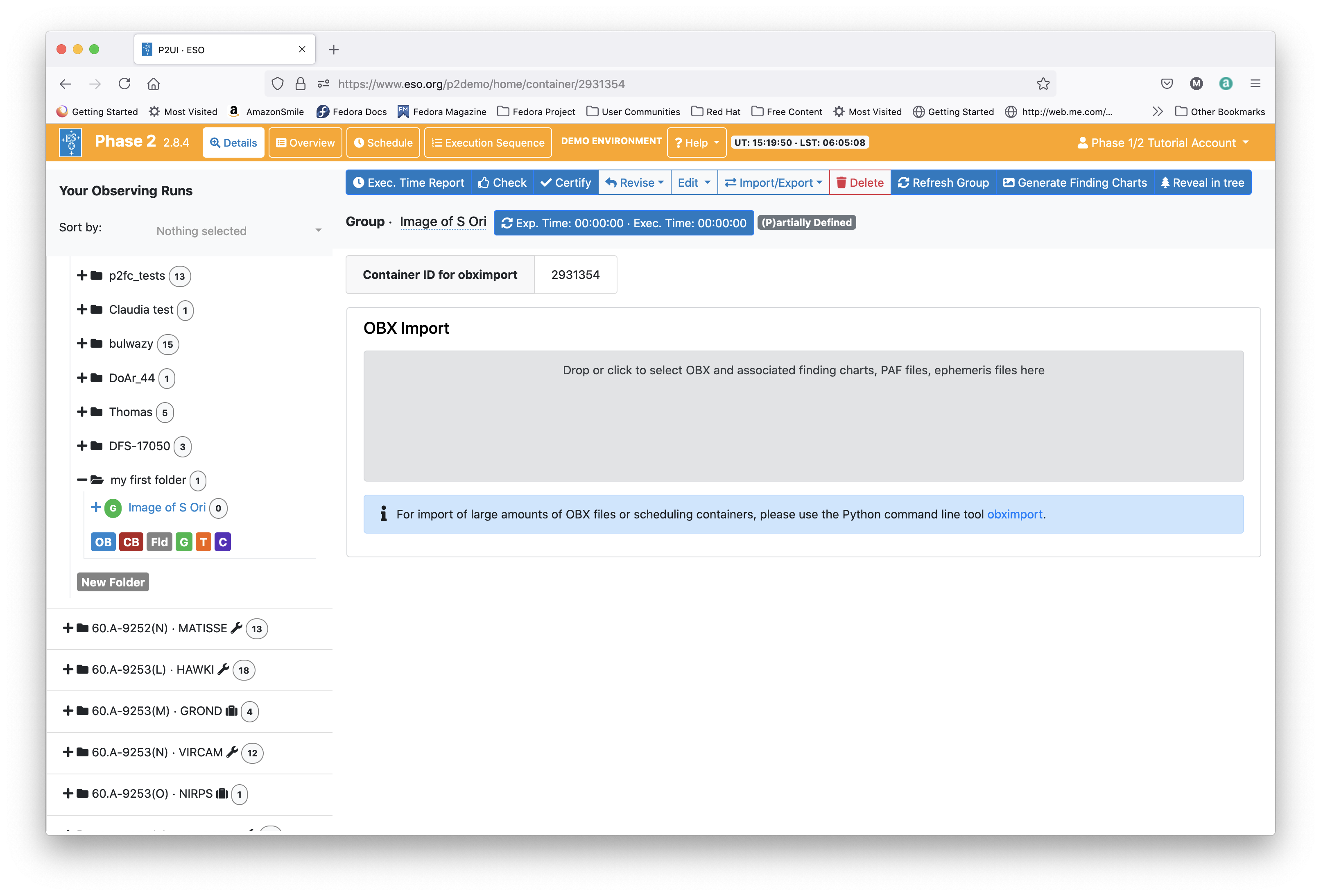 2.3: Creating the SCI-CAL concatenations inside the group container

All VLTI OBs are normally part of concatenations, which is a type of container in which OBs are executed in sequence. For GRAVITY, the standard sequence is SCI-CAL. Other sequences of science and calibrator OBs may be used as well within the standard limit of uninterrupted service mode observations of 1h (or 1.5h after an approved waiver request). In our example, we wish to define a regular SCI-CAL sequence. 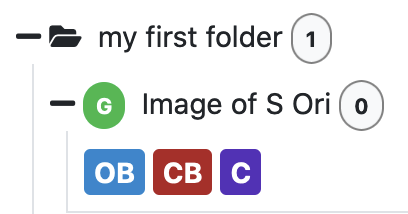 This creates an empty container of type concatenation in your group. Again, as for the folders and groups, type a name for your concatenation container, such as "S Ori small 1", as we will use this as the first concatenation using the small baseline configuration. Your window should then look like this: 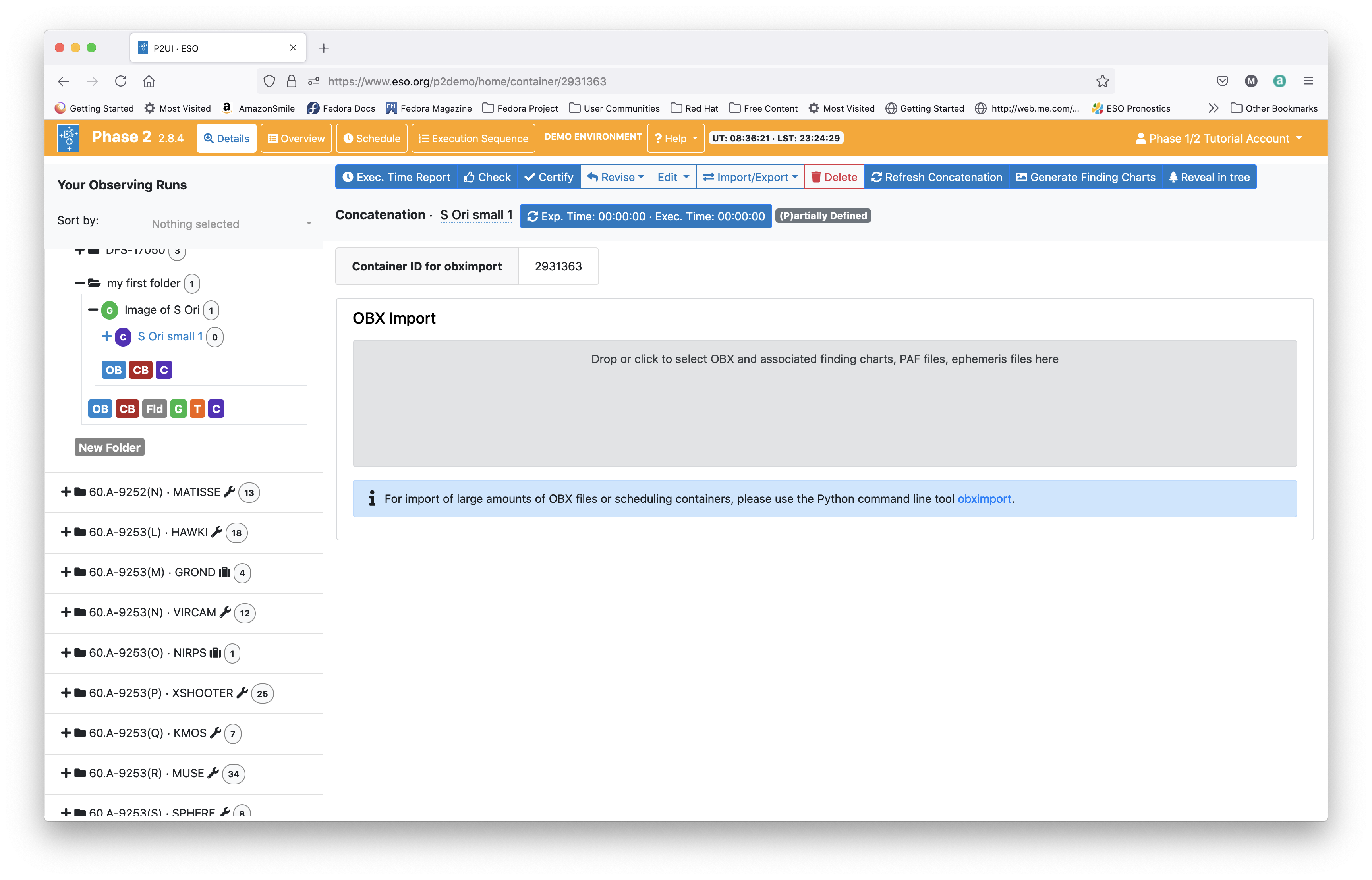 If you already have created a SCI-CAL concatenation outside of the group container, you can alternatively cut&paste or copy&paste an existing concatenation into this group using the 'Edit' function in top of your p2 window: 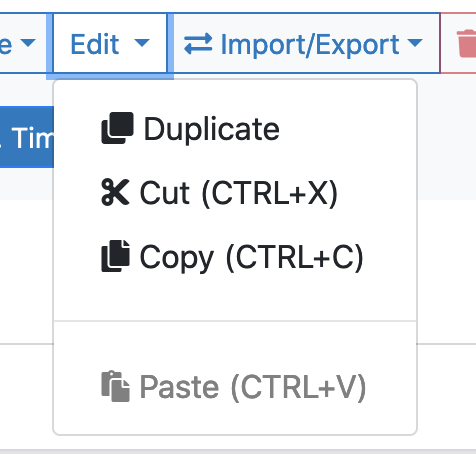 We call our OBs SCI_SOri-small-1 and CAL_31Ori-small-1, following the naming convention for VLTI OBs and indicating that these OBs are a part of the first concatenation using the small baseline configuration: 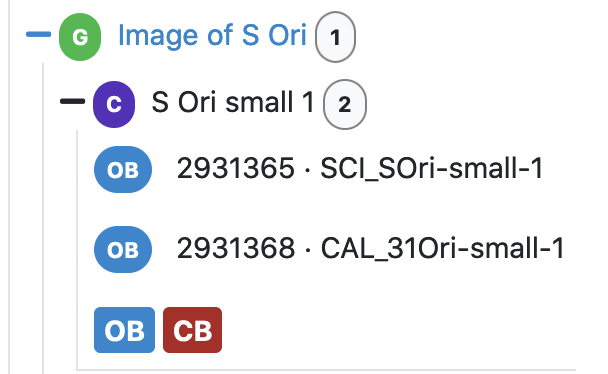 Click on the Time Intervals tab at the top of one of the OB windows. Here you can specify both Absolute Time Constraints (left tab) and Sidereal Time Constraints (right tab). Both types of time intervals are optional and shall only be used if there is a strong scientific reason to constrain the absolute time or the sidereal time of the observation.

For VLTI imaging observations specifically, the Sidereal Time Constraints shall not be used, as ESO's Paranal Science Operations Team takes care of filling the uv plane in a uniform way, also taking advantage of intermediate configurations. Absolute Time Constraints, however, need to be used if your science target is variable, and all observations of the group need to be taken within a certain period of time. The minimum supported period of time is 4 weeks and shall best be used around one of the pre-allocated imaging slots (ISLs). We encourage you to get in touch with the ESO User Support Department via support.eso.org to identify a well suited period of time.

In our example, S Ori is a Mira variable star with a period of about 1 year, and we would like all observations to be taken within 1 month during the month of November.

We click the 'Add' button in the 'Absolute Time Constraints' Tab and enter a an absolute time constraint of 01 Nov unitl 30 Nov for both the SCI and CAL OBs.

Then, the "Time Intervals" tab of our OB SCI_SOri-small-1 looks like this:

This completes our first concatenation in the group container 'Image of S Ori'.

2.5: Filling the group of concatenations

To create the first concatenation for the medium configuration, we duplicate the concaternation 'S Ori small 5' to 'S Ori medium 1', and in the OB acquisition templates therein, we change the keyword 'Interferometric Array' to 'medium'. We also need to adjust the expected visibility for both the SCI and the CAL OB as we are expecting a lower limiting visibility value with the longer baselines.

After duplicating the concatenations for the medium configurations, and following the same procedure for the large configurtion, our group finally looks like this:

Our group 'Image of S Ori' now includes a total of 15 concatenations, where each concatenation containes one SCI and one CAL OB. With the total of 15 uv points, we expect to be able to reconstruct an image of this source.