One Hundred Thousand Galaxies at a Glance

A main scientific application of wide-angle imaging in astronomy is the census and photometric and morphological classification (i.e. by colour and shape) of large quantities of celestial objects in order to identify sources of particular interest that warrant in-depth follow-up observations. This is normally done by means of spectroscopy, a basic observing technique that allows much more comprehensive physical diagnostics than does an image. However, detailed spectral observations requires the great light-collecting power of large telescopes such as the Very Large Telescope (VLT). In the past, many important classes of astronomical objects have been discovered by such survey work. Another central goal of wide-field imaging is the identification and characterisation of structures that extend over large sky areas, e.g., of the Milky Way in which we live, of comparatively nearby galaxies, and even of the Universe as a whole. The structure of astronomical objects reveals much about their history of formation which, because of the inherently very long ("astronomical") timescales, cannot be directly observed.

The Wide Field Imager as a survey and support instrument

At the European Southern Observatory, the Wide Field Imager (WFI) serves well these needs of the astronomical community. This 67-million pixel digital camera was installed at the 2.2-m MPG/ESO Telescope at ESO's La Silla Observatory in December 1998. Following initial, purely technical tests, a subsequent Scientific Verification Phase was devoted to exploring in depth the exceptional research capabilities of this new facility.

The WFI is special in that it combines the enormous light sensivity of modern CCD detectors - more than 90% of all incoming photons can be recorded - with a wide-angle optical system that allows high-quality imaging over a sky field measuring slightly over 0.5° x 0.5°, i.e., about the angular diameter of the Moon. Several early, spectacular WFI pictures of mostly single, large objects have been published previously.

The ESO Imaging Survey (EIS) has become a major user of the WFI . As an important service to the ESO users community, the EIS Team has already released several atlasses, as well as catalogues with many thousands of objects.

Various, particularly long and deep exposures were obtained during Science Verification and the routine operations phase. They demonstrate both the capabilities of the WFI and the stunning richness and splendor of the deep Universe.

From the available data, three sky areas have been selected and are shown here as examples of what is now possible with the WFI : the AXAF Deep Field , a field in the Milky Way "Zone of Avoidance" in the general direction of the "Great Attractor" , and Abell 496 , a rich cluster of galaxies.

The sky field shown here has been selected for a deep survey to be conducted with the Chandra X-Ray Observatory (CXO) during the guaranteed observing time of ESO's past Director General, Professor Riccardo Giacconi . There is very little interstellar neutral hydrogen gas within the Milky Way in this direction, ensuring a clear view towards the distant Universe (a much less favourable direction is shown on ESO Press Photos eso9954c-e ). The field is crowded with faint and distant galaxies. Early reconnaissance observations with VLT ANTU and the FORS1 multimode instrument have found some of them to have redshifts between 3.0 and 3.9, corresponding to recession velocities of 88-92% of the speed of light.

Advanced image processing software was used to find, classify and count the objects in this field. As expected, most of the brighter, small sources turned out to be foreground stars in the Milky Way. However, because the stars in the Milky Way Galaxy are essentially confined to a relatively thin disk and this line of sight is at a large angle to this disk, the number of stars visible down to a certain brightness limit only increases slowly in this direction. The counts show that at magnitude 20 [1], there are already more galaxies than stars, and at magnitude 24.5 the galaxies outnumber the stars by a factor of 5. The detection limit for galaxies in this photo is at about magnitude 26.0-26.5.

The counts also indicate that the WFI has recorded a total of nearly 100,000 galaxies in this single field - many of which in turn contain more than 100,000 million stars. If the area density of galaxies were the same in all directions, this would mean that the total number of galaxies in the entire sky, brighter than blue magnitude 26.0-26.5, is about 15,000 million.

An example of light pollution

The bright and straight line that extends from the bottom to the right edge in ESO Press Photo eso9954a is the trail of an earth-orbiting artificial satellite that passed through the telescope's field-of-view during one of the exposures. There is also another, fainter trail from another satellite in the upper left quadrant, best visible in the High-Res version of this photo.

Light pollution by satellites is an increasing problem in astronomical wide-angle imaging. Very remote and extremely dark sites such as Paranal and La Silla in the Chilean Atacama desert are not exempt from this. Such artifacts can be removed by means of advanced computerized image processing, but always at the loss of some scientific information.

2. Galaxies in the "Zone of Avoidance" towards the "Great Attractor"

The Milky Way Galaxy is one of the largest obstacles to the detailed study of large-scale structures in the Universe - an observational approach with the aim of ultimately revealing the physical conditions at the time of the Big Bang . The interstellar dust and high density of stars in our home galaxy severely obscure the view towards more distant objects.

For instance, an intensive search on earlier photographic plates covering the field shown in ESO Press Photo eso9954c revealed only about 70 background galaxies, much less than what can be expected for such a rich cluster if it were seen in a sky field outside the Milky Way band. This led astronomers in the last century to introduce the term "Zone of Avoidance" for the Milky Way band in the sky.

Modern electronic detectors are able to register much fainter objects than those seen on the photographic plates. In the present field, cf. ESO Press Photo eso9954c , it is now possible to detect previously unseen dwarf galaxies in this rich cluster, in addition to some 200,000 stars in our own Galaxy. This illustrates well the recent instrumental progress for this type of observations.

The sky region of ESO Press Photo eso9954c is of particular interest, as studies of the velocities of galaxies located in the cosmological neighbourhood of the Milky Way have indicated an unusual streaming motion in this direction. This can be explained by the presence of a large-scale gravitational pull, and the existence of a huge concentration of mass, named the "Great Attractor" , has been inferred.

Indeed, ESO Press Photo eso9954c shows the central region of an enormous cluster of galaxies (ACO 3627 ) in this direction. At a distance of about 250 million light-years, it is likely to be associated with (or to form the central part of) this "Great Attractor".

Evolution of galaxies in clusters

ESO Press Photos eso9954d and eso9954e display smaller areas from ESO Press Photo eso9954c . They include some typical examples of the dynamical evolution of galaxies in clusters under the influence of their mutual gravitational forces.

Clusters of galaxies are some of the largest cosmic structures that are kept together by the combined gravitational pull of its constituents. They frequently extend over many millions of light-years and are usually again grouped to the hierarchically next-higher level of structure, the so-called superclusters . Superclusters, in turn, often line up in extended filaments, hundreds of millions of light-years long; together, they form the foam- or sponge-like texture of the observable Universe.

ESO Press Photo eso9954f shows the galaxy cluster Abell 496 [2], as observed with the WFI . It contains many hundreds of individual galaxies. The most prominent is a large and bright galaxy, close to the center. The mass of this galaxy is more than 10 12 times that of our Sun.

The recession velocities of the galaxies in Abell 496 have been measured as about 10,000 km/s. According to Hubble's law for the expansion of the Universe, this places the cluster at a distance of about 500 million light-years. At that distance, the field shown in ESO Press Photo eso9954f measures about 4.5 million light-years on a side.

ESO Press Photo eso9954f displays a smaller region of Abell 496 with several member galaxies. The total mass of the cluster is of the order of 3 x 10 14 solar masses (1,000 times the mass of the Milky Way Galaxy). However, less than 10% of this mass is contributed by visible (so-called baryonic ) matter. The vast majority of the mass of Abell 496 and its galaxies consists of unseen "dark matter" , that does not emit light. It is perhaps of a completely different, but still unknown, nature and may possibly interact with visible matter only via the force of gravity.

The cluster Abell 496 is noteworthy for its broad range of galaxy types, which include virtually all morphological sub-types known. Among the brighter cluster members, elliptical galaxies are the most numerous, e.g. the one at the centre (ESO Press Photo eso9954h ).

In addition, there are many spiral galaxies ; two are shown in ESO Press Photo eso9954i and ESO Press Photo eso9954j . They are similar to the Milky Way Galaxy in which we live. However, the large majority are dwarf galaxies , each of which still weighs 10 9 to 10 10 solar masses. They are often concentrated in the vicinity of the more massive cluster members, with which they may eventually merge in the course of hundreds of millions to several billions of years.

Galaxy clusters like Abell 496 also contain very hot gas (about 1 million deg), but of such a low density that it is invisible in optical light; it is only detectable by its X-ray radiation. The massive central galaxy in Abell 496 (ESO Press Photo eso9954h ) accretes some of this gas at the unusually high rate of well over 100 solar masses per year. On time scales of millions to billions of years, this gas is then transformed into new stars.

[1] The astronomical magnitude scale indicates the brightness of celestial objects. A larger number means lower brightness; a difference of 1 (5) magnitude(s) corresponds to a factor of 2.52 (100). For historical reasons, the faintest objects visible to the unaided eye in a dark sky have magnitude 6. Objects of magnitude 26.5 are thus more than 100 million times fainter than this.

[2] Abell 496 is cluster No. 496 in a famous catalogue of galaxy clusters compiled by American astronomer George Abell during the 1950's. He identified them in photographic surveys of the entire sky. 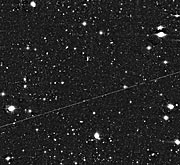 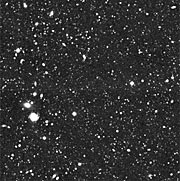 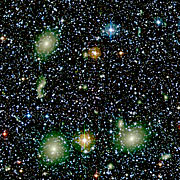 PR Image eso9954d
Detail of a view towards the Great Attractor 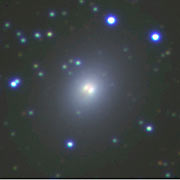 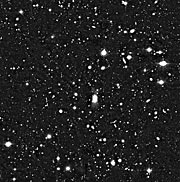 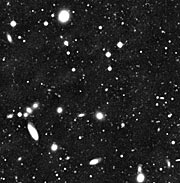 PR Image eso9954g
Detail of the cluster of galaxies Abell 496 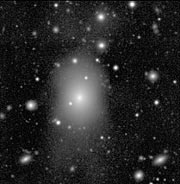 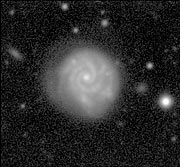 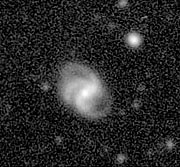 PR Image eso9954j
Disturbed spiral galaxy in the Abell 496 field
Send us your comments!
Subscribe to receive news from ESO in your language
Accelerated by CDN77
Terms & Conditions