New Images from the Wide Field Imager at La Silla

The Wide Field Imager (WFI) , a 67-million pixel digital camera at the MPG/ESO 2.2-m telescope at the La Silla Observatory continues to produce remarkable images for astronomical research. At the same time, many of these are of great aesthetic value and provide impressive views into sky regions with unsual objects. Earlier this year, the WFI recorded a number of fields in the direction of the Large Magellanic Cloud (LMC), a satellite galaxy to our own Milky Way Galaxy, deep down in the southern sky. It is located at a distance of about 170,000 light-years and contains many nebulae and stellar clusters.Two colour composite photos of "H II regions" in the LMC are shown here, centred near N44 and N119 [1]. They are nebulae in which (some of) the gas is ionized, i.e. the atoms have lost one or more electrons by the action of energetic ultraviolet radiation emitted by very hot and luminous stars in this area. Both of these nebulae are seen in front of rich star fields in this galaxy in which there are also several stellar clusters.

These photos are based on exposures made through three optical filtres, including a narrow-band one centred on the H-alpha spectral line from hydrogen (wavelength 656.2 nm in the red part of the spectrum; light of this wavelength is emitted when protons and electrons combine to form hydrogen atoms). The red colour therefore traces the extremely complex distribution of ionized hydrogen within the nebulae. The present reproductions enhance this colour in order to show the fainter structures. Note also the very different colours of individual stars, mostly reflecting their temperature, from the hottest (blue) to the coolest (red).

Stars and supernova remnants in the N44 area

N44 is a very bright, rich and well-studied complex in the LMC, somewhat apart from the other nebulae in this galaxy. The central region, the structure of which can be best appreciated in eso9931b , is dominated by a large, ringshaped nebula that includes a bright stellar association of very luminous stars. It emits X-rays - this is interpreted as a sign that several heavy stars in this area have exploded as supernova during the last few million years.

The general appearance (in astronomical terminology: the "morphology") is well explained by a combination of fast outflow from stars (stellar winds) and supernova remnants, as well as sequential star formation. However, according to Annie Laval and her collaborators at Observatoire de Marseille (France), the origin and interpretation of the individual features of this nebula is still enigmatic. She also remarks that the motions of some of the ionized gas in N44 is unusual: it is not clear whether there are internal motions in dust clouds or if there are several distinct gas layers.

The new observations with the WFI of the distribution of the different objects (stars, gas condensations, dust clouds) will help to understand better what is really happening in this very complex environment.

N119 is another "H II region" in the LMC. The most remarkable characteristic is its pronounced spiral shape that is reminiscent of a barred spiral galaxy [3]. It is quite large, about 400 x 600 light-years, and it is situated at the northern side of the stellar bar of the Large Magellanic Cloud, near the centre of rotation of the neutral hydrogen in this galaxy. It is this bar that is responsible for the much higher star density in the lower half of the full-field photo.

N119 is the only nebula in the LMC in which the gas is distributed according to such a spiral structure. The distribution of the ionizing stars cannot well explain such an intriguing shape. The measured motions indicate the action of stellar winds and that the ionized gas forms a rotating system. Research by Annie Laval (Observatoire de Marseille, France) and Patricia Ambrocio-Cruz (Universidad Nacional Autonoma de Mexico) and their respective collaborators suggest that the reason for such a peculiar shape and motion pattern is probably a collision between two interstellar clouds. The gas in the clouds is highly compressed during the collision, triggering in this way the formation of the luminous stars that are now ionizing the nebula. The two teams are now developing a new model, based on numerical computer simulations, to understand better the intricacies of the collision process, and thus how N119 became such a beautiful spiral nebula.

eso9931d shows in more detail the central region of N119 , highlighting the different distributions of ionized gas and luminous stars. The area depicted in eso9931e is located in the northeastern (top left) arm of the spiral, where the intricate filamentary structure of the nebulosity is well seen. eso9931f is centered on the bright, rich and compact cluster (NGC 1916) that can be seen near the bottom center of the full-field picture, clearly showing the richness of the field surrounding it, as well as the wide variety of stellar colours.

[1] The letter "N" (for "Nebula") in the designation of these objects indicates that they were included in the "Catalogue of H-alpha emission stars and nebulae in the Magellanic Clouds" compiled and published in 1956 by American astronomer-astronaut Karl Henize (1926 - 1993).

[2] In eso9931a and eso9931c , the resolution has been degraded by reducing the number of pixels in one direction from about 8000 to 2000 in the "High-Resolution version", in order to make the complete image transportable over the web without incurring excessive transfer times. Still it is very large, even in the highly compressed jpeg-format, reflecting the great amount of details visible in this extremely rich star field. The "Normal" and "Preview" versions are smaller and may be acquired faster, but with a corresponding loss of detail.

[3] VLT images of a typical barred spiral galaxy (NGC 1365) have been published.

Technical information: The two colour composites are based on 12 exposures each, obtained on 25 and 26 March 1999 in three colours, B(lue), V (green-yellow) and H-alpha (red), and with total exposures times of 2, 2 and 20 min, respectively. The observation conditions were mediocre and the image quality is about 2 arcsec. The images in each filter are composites of 4 individual frames that were obtained with the telescope pointing at slightly different positions in the sky, so that the parts of the sky falling in the gaps between the 8 individual 2k x 4k CCDs in any given frame are recorded on the others. The monochromatic images were then produced by superimposing the individual frames, correcting for the telescope offsets; this ensures that the complete field is well covered. However, this procedure is not perfect, as observing conditions may change slightly from exposure to exposure, resulting in small differences in the background intensity. Finally, the combined images in each filter are aligned and colour-coded to produce the resulting colour picture. The alignment process is able to correct quite well for a number of small distortions across the field of view, but in order to obtain a uniform quality over all the entire field, some slight misalignment may be introduced in certain narrow strips. The field size of ESO Press Photos eso9931a and eso9931c is about 32 x 32 arcmin 2. North is up and East is left. 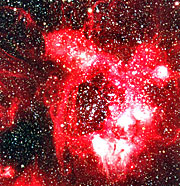 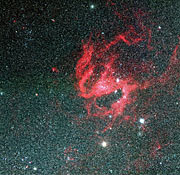 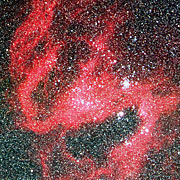 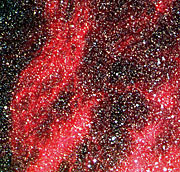 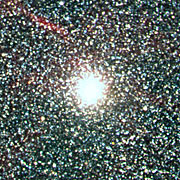 PR Image eso9931f
Globular cluster NGC1916 near N119 in the Large Magellanic Cloud
Send us your comments!
Subscribe to receive news from ESO in your language
Accelerated by CDN77
Terms & Conditions