Just like Charles Dickens' Christmas Carol takes us on a journey into past, present and future in the time of only one Christmas Eve, two of ESO' s telescopes captured various stages in the life of a star in a single image.

Image eso0544a shows the area surrounding the stellar cluster NGC 2467, located in the southern constellation of Puppis (" The Stern"). With an age of a few million years at most, it is a very active stellar nursery, where new stars are born continuously from large clouds of dust and gas.

The image, looking like a colourful cosmic ghost or a gigantic celestial Mandrill [1], contains the open clusters Haffner 18 (centre) and Haffner 19 (middle right: it is located inside the smaller pink region - the lower eye of the Mandrill), as well as vast areas of ionised gas.

The bright star at the centre of the largest pink region on the bottom of the image is HD 64315, a massive young star that is helping shaping the structure of the whole nebular region.

Image eso0544a was taken with the Wide-Field Imager camera at the 2.2m MPG/ESO telescope located at La Silla, in Chile.

Another image of the central part of this area is shown as image eso0544b. It was obtained with the FORS2 instrument at ESO' s Very Large Telescope on Cerro Paranal, also in Chile.

Image eso0544b zooms in on the open stellar cluster Haffner 18, perfectly illustrating three different stages of this process of star formation: In the centre of the picture, Haffner 18, a group of mature stars that have already dispersed their birth nebulae, represents the completed product or immediate past of the star formation process. Located at the bottom left of this cluster, a very young star, just come into existence and, still surrounded by its birth cocoon of gas, provides insight into the very present of star birth. Finally, the dust clouds towards the right corner of the image are active stellar nurseries that will produce more new stars in the future.

Haffner 18 contains about 50 stars, among which several short lived, massive ones. The massive star still surrounded by a small, dense shell of hydrogen, has the rather cryptic name of FM3060a. The shell is about 2.5 light-years wide and expands at a speed of 20 km/s. It must have been created some 40,000 years ago. The cluster is between 25,000 and 30,000 light-years away from us [2].

Image eso0544a is based on images obtained with the WFI instrument on the ESO/MPG 2.2-m telescope for Rubio/Minniti/Barba/Mendez on December, 2003. The 49 observations were done in six different filters : U (2 hour exposure), B, O III, V, H-alpha and R (1 hour exposure each). The data were extracted from the ESO Science Archive. The raw observations were reduced and combined by Benoî t Vandame (ESO). North is right and East is to the top. The field of view is about 30x30 arcmin. Image eso0544b is a colour-composite image obtained with the FORS2 multi-mode instrument on Kueyen, the second Unit Telescope of the Very Large Telescope. The data was collected during the commissioning of the instrument in February 2000, through 4 filters: B, V, R and I, for a total exposure time of only 11 minutes. The observations were extracted from the ESO Science Archive and reduced by Henri Boffin (ESO). North is above and East is to the left. Final processing of the images was done by Kristina Boneva and Haennes Heyer (ESO). 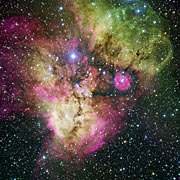 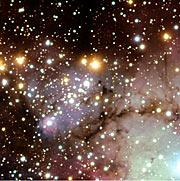