Most present-day large galaxies are spirals, presenting a disc surrounding a central bulge. Famous examples are our own Milky Way or the Andromeda Galaxy. When and how did these spiral galaxies form? Why do a great majority of them present a massive central bulge? An international team of astronomers [1] presents new convincing answers to these fundamental questions. For this, they rely on an extensive dataset of observations of galaxies taken with several space- and ground-based telescopes. In particular, they used over a two-year period, several instruments on ESO's Very Large Telescope. Among others, their observations reveal that roughly half of the present-day stars were formed in the period between 8,000 million and 4,000 million years ago, mostly in episodic burst of intense star formation occurring in Luminous Infrared Galaxies. From this and other evidence, the astronomers devised an innovative scenario, dubbed the "spiral rebuilding". They claim that most present-day spiral galaxies are the results of one or several merger events. If confirmed, this new scenario could revolutionise the way astronomers think galaxies formed.

A fleet of instruments

How and when did galaxies form? How and when did stars form in these island universes? These questions are still posing a considerable challenge to present-day astronomers.

Front-line observational results obtained with a fleet of ground- and space-based telescopes by an international team of astronomers [1] provide new insights into these fundamental issues.

For this, they embarked on an ambitious long-term study at various wavelengths of 195 galaxies with a redshift [2] greater than 0.4, i.e. located more than 4000 million light-years away. These galaxies were studied using ESO's Very Large Telescope, as well as the NASA/ESA Hubble Space Telescope, the ESA Infrared Space Observatory (ISO) satellite and the NRAO Very Large Array.

With the Very Large Telescope, observations were performed on Antu and Kueyen over a two-year period using the quasi-twin instruments FORS1 and FORS2 in the visible and ISAAC in the infrared. In both cases, it was essential to rely on the unique capabilities of the VLT to obtain high-quality spectra with the required resolution.

A fleet of results

From their extensive set of data, the astronomers could draw a number of important conclusions.

First, based on the near-infrared luminosities of the galaxies, they infer that most of the galaxies they studied contain between 30,000 million and 300,000 million times the mass of the Sun in the form of stars. This is roughly a factor 0.2 to 2 the amount of mass locked in stars in our own Milky Way.

Second, they discovered that contrary to the local Universe where so-called Luminous Infrared Galaxies (LIRGs; [3]) are very rare objects, at a redshift from 0.4 to 1, that is, 4,000 to 8,000 million years ago, roughly one sixth of bright galaxies were LIRGs.

Because this peculiar class of galaxies is believed to be going through a very active phase of star formation, with a doubling of the stellar mass occurring in less than 1,000 million years, the existence of such a large fraction of these LIRGs in the past Universe has important consequences on the total stellar formation rate.

As François Hammer (Paris Observatory, France), leader of the team, states: "We are thus led to the conclusion that during the time span from roughly 8,000 million to 4,000 million years ago, intermediate mass galaxies converted about half of their total mass into stars. Moreover, this star formation must have taken place in very intense bursts when galaxies were emitting huge amount of infrared radiation and appeared as LIRGs."

Another result could be secured using the spectra obtained with the Very Large Telescope: the astronomers measured the chemical abundances in several of the observed galaxies (ESO Press Photo eso0502). They find that galaxies with large redshifts show oxygen abundances two times lower than present-day spirals. As it is stars which produce oxygen in a galaxy, this again gives support to the fact that these galaxies have been actively forming stars in the period between 8,000 and 4,000 million years ago.

And because it is believed that galaxy collisions and mergers play an important role in triggering such phases of enhanced star-forming activity, these observations indicate that galaxy merging still occurred frequently less than 8,000 million years ago.

The story revealed by these observations is in agreement with the so-called "hierarchical merging of galaxies" scenario, present in the literature since about 20 years. According to this model, small galaxies merge to build larger ones. As François Hammer however points out: "In the current scenario, it was usually assumed that galaxy merging almost ceased 8,000 million years ago. Our complete set of observations show that this is far from being the case. In the following 4,000 million years, galaxies still merged to form the large spirals we observe in the local Universe."

To account for all these properties, the astronomers thus devised a new galaxy formation scenario, comprising three major phases: a merger event, a compact galaxy phase and a "growth of the disc" phase (see ESO Press Photo eso0502).

Because of the unique aspects of this scenario, where big galaxies get first disrupted by a major collision to be born again later as a present-day spiral galaxy, the astronomers rather logically dubbed their evolutionary sequence, the "spiral galaxy rebuilding".

Although being at odds with standard views which assert that galaxy mergers produce elliptical galaxies instead of spiral ones, the astronomers stress that their scenario is consistent with the observed fractions of the different types of galaxies and can account for all the observations.

The new scenario can indeed account for the formation of about three quarters of the present-day spiral galaxies, those with massive central bulge. It would apply for example to the Andromeda Galaxy but not to our own Milky way. It seems that our Galaxy somehow escaped major collisions in the last thousands of million years.

Further observations, in particular with the FLAMES instrument on the VLT, will show if spiral galaxies are indeed relatively recent born-again systems created from major merger events.

[2]: In astronomy, the redshift denotes the fraction by which the lines in the spectrum of an object are shifted towards longer wavelengths. The observed redshift of a remote galaxy provides an estimate of its distance. The distances and ages indicated in the present text are based on an age of the Universe of 13,700 million years.

[3]: Luminous Infrared Galaxies (LIRGs) are a subset of galaxies whose infrared luminosity is larger than 100,000 million time the luminosity of our Sun. They were first discovered as a class by the ESA ISO satellite and are believed to be galaxies undergoing enhanced stellar formation.

The research presented in this Press Release has been published in the leading astronomical journal Astronomy and Astrophysics, vol. 430(1). The paper ("Did most present-day spirals form during the last 8 Gyrs? - A formation history with violent episodes revealed by panchromatic observations" by F. Hammer et al.) is available in PDF format from the A&A web site. 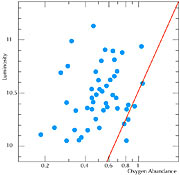 PR Image eso0502b
The spiral rebuilding scenario
Send us your comments!
Subscribe to receive news from ESO in your language
Accelerated by CDN77
Terms & Conditions