A "Dragon" on the Surface of Titan

VLT Looks through Narrow Atmospheric Window and Produces Most Detailed Images Yet.

New images of unsurpassed clarity have been obtained with the ESO Very Large Telescope (VLT) of formations on the surface of Titan, the largest moon in the Saturnian system. They were made by an international research team [1] during recent commissioning observations with the "Simultaneous Differential Imager (SDI)", a novel optical device, just installed at the NACO Adaptive Optics instrument [2]. With the high-contrast SDI camera, it is possible to obtain extremely sharp images in three colours simultaneously. Although mainly conceived for exoplanet imaging, this device is also very useful for observations of objects with thick atmospheres in the solar system like Titan. Peering at the same time through a narrow, unobscured near-infrared spectral window in the dense methane atmosphere and an adjacent non-transparent waveband, images were obtained that are virtually uncontaminated by atmospheric components. They map the reflectivity of a large number of surface features in unprecedented detail. The images show a number of surface regions with very different reflectivity. Of particular interest are several large "dark" areas of uniformly low reflectivity. One possible interpretation is that they represent huge surface reservoirs of liquid hydrocarbons. Whatever the case, these new observations will be most useful for the planning of the delivery of the Huygens probe - now approaching the Saturn system on the NASA/ESA Cassini spacecraft and scheduled for descent to Titan's surface in early 2005.

Views of Titan - the quest for the surface

Titan, the largest Saturnian moon and the second largest moon of the solar system (only Jupiter's Ganymede is slightly larger), is the only satellite known with a substantial atmosphere. It is composed mainly of nitrogen (like that of the Earth) and also contains significant amounts of methane. Opaque orange hazes and clouds of complex organic molecules effectively shield the solid surface from view, cf. e.g. the Voyager images.

Recent spectroscopic and radar observations suggest that there are huge surface reservoirs of liquid hydrocarbons and a methane-based meteorological cycle similar to Earth's hydrological cycle. This makes Titan the only known object with rainfall and potential surface oceans other than the Earth and thus a tantalizing research object for the study of pre-biotic chemistry and the origin of life on Earth.

The Huygens probe launched from the NASA/ESA Cassini-Huygens mission will enter Titan's atmosphere in early 2005 to make measurements of the physical and chemical conditions, hopefully surviving the descent to document the surface as well.

Coordinated ground-based observations will provide essential support for the scientific return of the Cassini-Huygens encounter. However, only 8-10 m class telescopes with adaptive optics imaging systems or space-borne instruments can achieve sufficient image sharpness to attain a useful level of detail.

The new map of a large part of Titan's surface, shown in PR ESO Press Photo eso0412, represents an important contribution in this direction.

A question of atmospheric windows

The first intriguing views of Titan's surface were obtained by the Hubble Space Telescope (HST) in the 1990's. From the ground, images were obtained in 2001-2 with the Keck II and Gemini North telescopes and more recently with the ESO Very Large Telescope (VLT), cf. ESO Press Photos eso0408. All of these observations were made through a single narrow-band filter at a time.

The wavelengths used for such observations are critical for the amount of surface detail captured on the images. Optimally, one would look for a spectral band in which the atmosphere is completely transparent; a number of such "windows" are known to exist. But although the above observations were made in wavebands roughly matching atmospheric windows and do show surface features, they also include the light from different atmospheric layers. In a sense, they therefore correspond to viewing Titan's surface through a somewhat opaque screen or, more poetically, the sight by an ancient sailor, catching for the first time a glimpse of an unknown continent through the coastal haze.

One narrow "window" is available in the near-infrared spectral region near wavelength 1.575 μm. In February 2004, an international research team [1] working at the ESO VLT at the Paranal Observatory (Chile) obtained images of Titan's surface through this spectral window with unprecedented spatial resolution and with the lowest contamination of atmospheric condensates to date.

They accomplished this during six nights (February 2, 3, 5, 6, 7 and 8, 2004) at the time of the commissioning phase of a novel high-contrast imaging mode for the NACO adaptive optics instrument on the 8.2-m VLT YEPUN telescope, using the Simultaneous Differential Imager (SDI) [2]. This novel optical device provides four simultaneous high-resolution images (ESO Press Photo eso0412) at three wavelengths around a near-infrared atmospheric methane absorption feature.

The main application of the SDI is high-contrast imaging for the search for substellar companions with methane in their atmosphere, e.g. brown dwarfs and giant exoplanets, near other stars. However, as the present photos demonstrate, it is also superbly suited for Titan imaging.

Titan is tidally-locked to Saturn, and hence always presents the same face towards the planet. To image all sides of Titan (from the Earth) therefore requires observations during almost one entire orbital period, 16 days. Still, the present week-long observing campaign enabled the team to map approximately three-quarters of the surface of Titan.

A new map of the surface of Titan (in cylindrical projection and covering most, but not all of the area imaged during these observations) is shown in eso0412a. For this, the simultaneous "atmospheric" images (at waveband 1.625 μm) were "subtracted" from the "surface" images (1.575 and 1.600 μm) in order to remove any residual atmospheric features present in the latter. The ability to subtract simultaneous images is unique to the SDI camera [2].

This truly unique map shows the fraction of sunlight reflected from the surface - bright areas reflect more light than the darker ones. The amount of reflection (in astronomical terms: the "albedo") depends on the composition and structure of the surface layer and it is not possible with this single-wavelength ("monochromatic") map alone to elucidate the true nature of those features.

Nevertheless, recent radar observations with the Arecibo antenna have provided evidence for liquid surfaces on Titan, and the low-reflection areas (dark on eso0412e and eso0412f) could indicate the locations of those suspected reservoirs of liquid hydrocarbons. They also provide a possible source for the replenishment of methane that is continuously lost in the atmosphere because of decomposition by the sunlight.

Provisional names of the new features

A comparison (ESO Press Photo eso0412) with an earlier NACO image (available as ESO Press Photo eso0408c) obtained through another filter is useful. It demonstrates the importance of employing a filter that precisely fits the atmospheric window and hence the gain of clarity with the present observations. It also provides independent confirmation of the reality of the gross features, since the observations are separated by 15 months in time.

Over the range of longitudes which have been mapped during the present observations (ESO Press Photo eso0412), it is obvious that the southern hemisphere of Titan is dominated by a single bright region centered at approximately 15° longitude. (Note that this is not the so-called "bright feature" seen in the HST images at longitude 80° - 130°, an area that was not covered during the present observations).

The equatorial area displays the above mentioned, well-defined dark (low-reflection) structures, cf. ESO Press Photo eso0412. In order to facilitate their identification, the team decided to give these dark features provisional names - official names will be assigned at a later moment by the Working Group on Planetary System Nomenclature of the International Astronomical Union (IAU WGPSN). From left to right, the SDI team [1] has referred to these features informally as: the "lying H", the "dog" chasing a "ball", and the "dragon's head".

The team expects to continue imaging and monitoring of Titan in the coming months, with the goal of assisting the Cassini-Huygens team in the interpretation and understanding of what will certainly be a rich and complex flow of information about this enigmatic moon.

[2] The novel Simultaneous Differential Imager (SDI) is a special set of optics mounted into the near-infrared camera CONICA on VLT YEPUN. It is comprised of a double calcite Wollaston prism responsible for the quad beam splitting and a special four-quadrant narrow-band filter that is located directly in front of the detector. It was developed and deployed by Laird Close (Steward Observatory, University of Arizona) and Rainer Lenzen (Max-Planck-Institut für Astronomie in Heidelberg) in collaboration with ESO. NACO is an abbreviation of NAOS/CONICA. The NAOS adaptive optics corrector was built, under an ESO contract, by Office National d'Etudes et de Recherches Aérospatiales (ONERA), Laboratoire d'Astrophysique de Grenoble (LAOG) and the LESIA and GEPI laboratories of the Observatoire de Paris in France, in collaboration with ESO. The CONICA infra-red camera was built, under an ESO contract, by the Max-Planck-Institut für Astronomie (MPIA) (Heidelberg) and the Max-Planck Institut für Extraterrestrische Physik (MPE) (Garching) in Germany, in collaboration with ESO.

The information and images in this press release are based on data that were obtained during commissioning observations of the SDI device on NACO [2] and are now available in the ESO Science Data Archive. This work is described in detail in a research paper "First surface map of Titan at 1.575 microns" by M. Hartung et al., submitted to the European research journal Astronomy & Astrophysics. 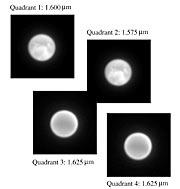