A rare celestial phenomenon involving the distant planet Pluto has occurred twice within the past month. Seen from the Earth, this planet moved in front of two different stars on July 20 and August 21, respectively, providing observers at various observatories in South America and in the Pacific area with a long awaited and most welcome opportunity to learn more about the tenuous atmosphere of that cold planet. On the first date, a series of very sharp images of a small sky field with Pluto and the star was obtained with the NAOS-CONICA (NACO) adaptive optics (AO) camera mounted on the ESO VLT 8.2-m YEPUN telescope at the Paranal Observatory.

With a diameter of about 2300 km, Pluto is about six times smaller than the Earth. Like our own planet, it possesses a relatively large moon, Charon, measuring 1200 km across and circling Pluto at a distance of about 19,600 km once every 6.4 days. In fact, because of the similarity of the two bodies, the Pluto-Charon system is often referred to as a double planet .

At the current distance of nearly 4,500 million km from the Earth, Pluto's disk subtends a very small angle in the sky, 0.107 arcsec. It is therefore very seldom that Pluto - during its orbital motion - passes exactly in front of a comparatively bright star. Such events are known as "occultations", and it is difficult to predict exactly when and where on the Earth's surface they are visible.

When Pluto moves in front of a star, it casts a "shadow" on the Earth's surface within which an observer cannot see the star, much like the Earth's Moon hides the Sun during a total solar eclipse. During the occultation event, Pluto's "shadow" also moves across the Earth's surface. The width of this shadow is equal to Pluto's diameter, i.e. about 2300 km.

One such occultation event was observed in 1988, and two others were expected to occur in 2002, according to predictions published in 2000 by American astronomers Steve W. McDonald and James L. Elliot (Massachussetts Institute of Technology [MIT], Cambridge, USA). Further refinements provided by other observers later showed that the first event would be visible from South America on July 20, 2002, while a second one on August 21 was expected to be observable in the Pacific basin, from the western coast of North America down to Hawaii and New Zealand.

A stellar occultation provides a useful opportunity to study the planetary atmosphere, by means of accurate photometric measurements of the dimming of the stellar light, as the planet moves in front of the star. The observed variation of the light intensity and colour provides crucial information about the structure (atmospheric layers) and composition of different gases and aerosols. More information is available in the Appendix below.

In order to profit from the rare opportunity to learn more about Pluto and its atmosphere, a large campaign involving more than twenty scientists and engineers from the Paris Observatory and associated institutions [1] was organized to observe the July 20, 2002, event involving an occultation of a star of visual magnitude 11 (i.e., about 100 times fainter than what can be perceived with then unaided eye), referred to as "P126" in McDonald and Elliot's catalogue.

In May 2002, preparatory observations showed that star to be double, with the brighter component of the system ("P126 A") being likely to be occulted by Pluto, as seen from South America. However, because of the duplicity, the predictions of exactly where the shadow of Pluto would sweep the ground were uncertain by about 0.1 arcsec in the sky, corresponding to more than 2000 km on the ground.

In the end, the close approach (an "appulse" in astronomical terminology) of Pluto and P126 A was indeed observed from various sites in South America, with several mobile telescopes and also including major facilities at the ESO La Silla and Paranal Observatories. In particular, unique and very sharp images were obtained with the NAOS-CONICA (NACO) adaptive optics (AO) camera mounted on the ESO VLT 8.2-m YEPUN telescope . One of the NACO images is shown in ESO Press Photos eso0224b-c . These images were made during the final adjustments of the NACO instrument and in anticipation of the upcoming science verification observations. All frames are now publicly available from the NACO data webpage on the ESO site.

The NACO image shown was obtained in infrared light (in the K-band at wavelength 2.2 µm) on July 20, 2002, some 45 min before Pluto's shadow passed north of Paranal (ESO Press Photo eso0224a). The orientation is such that North is up, and East is left. The small sky field measures about 7 x 7 arcsec 2. The pixel size is 0.027 arcsec, and the achieved image sharpness corresponds to the theoretical limit (the diffraction limit) with a telescope of this size and at this wavelength (0.07 arcsec).

The object at the centre is the star P126 A of K-magnitude 9.5 (see also ESO Press Photo eso0224c where the objects are identified), while the brighter object at the right is the companion star P126 B, 2.25 arcsec away. As P126 B is very red (of stellar type M), it appears brighter than P126 A at this infrared wavelength - the opposite is true in visible light. The intensity of the left part of the image has been multiplied by a factor of approximately 35 in order to better display Pluto and its moon Charon, located some 0.5 arcsec to the lower left (SE) of the planet. Note also the faint star "P126 C", at this moment very close to Pluto; it is probably a (physical) member of the P126 system.

A closer inspection of the original image shows that the disk of Pluto (with a diameter of 0.107 arscec and covering 16 NACO pixels) is (barely) resolved.

Many images were taken by NACO prior to the occultation. They will allow to retrace the precise motion of Pluto relative to P126 A, thereby improving the mapping of the motion of Pluto's shadow on the ground, cf. ESO Press Photo eso0224a . This is important in order to apply the correct geometrical circumstances for the interpretation of the photometric observations. A first evaluation of the NACO data indicates that the Paranal site "missed" the upper layers of Pluto's atmosphere by a mere 200 km or so - this is equivalent to no more than one hundredth of an arcsec as projected on the sky.

A full report on the NACO observations and other results by the present group of astronomers, also from the subsequent occultation of another star on August 21, 2002, that was extensively observed with the Canada-France-Hawaii Telescope (CFHT) on Mauna Kea (Hawaii, USA), is available at this URL:

Stellar occultations are presently the only way to probe Pluto's tenuous atmosphere . When the star moves behind the planet, the stellar rays suffer minute deviations as they are refracted (i.e., bent and defocussed) by the planet's atmospheric layers. This effect, together with the large distance to the planet, manifests itself as a gradual decline of observed intensity of the stellar light, rather than an abrupt drop as this would be the case if the planet had no atmosphere.

Pluto's atmosphere was first detected on August 19, 1985, during a stellar occultation observed from Israel and then studied in more detail from Australia and from the Kuiper Airborne Observatory (KAO) during another such event on July 9, 1988. However, Pluto's atmosphere is still not well understood. It appears to be mostly composed of a dominant gas of atomic weight 28, probably molecular nitrogen (N 2). Near-IR solar reflection spectra have since shown a small presence of methane (CH 4), probably at a level of about 1% relative to nitrogen.

The 1988 occultation clearly revealed two different layers in Pluto's atmosphere, a rather smooth and isothermal outer part, and a more complex one near the planet's surface, with the possible presence of an inversion layer (in which the temperature increases with altitude) or possibly haze of photochemical origin.

The present observations aimed at discriminating between the current theoretical models of Pluto's atmosphere by means of detailed measurements of the changing intensity and colour of the stellar light, as the star is seen through progressively lower layers of the planet's atmosphere.

Another important issue is the question of whether Pluto's atmosphere has changed since 1988. In the intervening 14 years, the planet has moved away from the Sun in its elliptic orbit, whereby there has been a change in the insolation (solar flux) of about 6%. This effect might possibly have caused changes in the surface temperature and in the overall atmospheric structure of Pluto. However, any firm conclusions will have to await a complete and careful evaluation of all available observations. 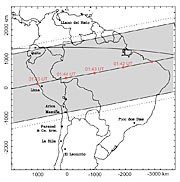 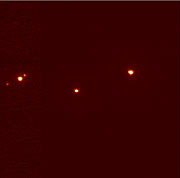 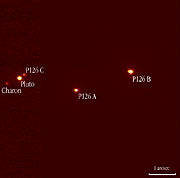 PR Image eso0224c
Pluto, Charon, and triple star "P126 A, B, C"
Send us your comments!
Subscribe to receive news from ESO in your language
Accelerated by CDN77
Terms & Conditions