Hunting the Southern Skies with SIMBA

A new instrument, SIMBA ("SEST IMaging Bolometer Array"), has been installed at the Swedish-ESO Submillimetre Telescope (SEST) at the ESO La Silla Observatory in July 2001. It records astronomical images at a wavelength of 1.2 mm and is able to quickly map large sky areas. In order to achieve the best possible sensitivity, SIMBA is cooled to only 0.3 deg above the absolute zero on the temperature scale.

SIMBA is the first imaging millimetre instrument in the southern hemisphere. Radiation at this wavelength is mostly emitted from cold dust and ionized gas in a variety of objects in the Universe. Among other, SIMBA now opens exciting prospects for in-depth studies of the "hidden" sites of star formation, deep inside dense interstellar nebulae. While such clouds are impenetrable to optical light, they are transparent to millimetre radiation and SIMBA can therefore observe the associated phenomena, in particular the dust around nascent stars .

This sophisticated instrument can also search for disks of cold dust around nearby stars in which planets are being formed or which may be left-overs of this basic process. Equally important, SIMBA may observe extremely distant galaxies in the early universe, recording them while they were still in the formation stage.

Various SIMBA images have been obtained during the first tests of the new instrument. The first observations confirm the great promise for unique astronomical studies of the southern sky in the millimetre wavelength region.

These results also pave the way towards the Atacama Large Millimeter Array (ALMA), the giant, joint research project that is now under study in Europe, the USA and Japan.

SIMBA ("SEST IMaging Bolometer Array") was built and installed at the Swedish-ESO Submillimetre Telescope (SEST) at La Silla (Chile) within an international collaboration between the University of Bochum and the Max Planck Institute for Radio Astronomy in Germany, the Swedish National Facility for Radio Astronomy and ESO.

The SIMBA ("Lion" in Swahili) instrument detects radiation at a wavelength of 1.2 mm. It has 37 "horns" and acts like a camera with 37 picture elements (pixels). By changing the pointing direction of the telescope, relatively large sky fields can be imaged.

As the first and only imaging millimetre instrument in the southern hemisphere, SIMBA now looks up towards rich and virgin hunting grounds in the sky. Observations at millimetre wavelengths are particularly useful for studies of star formation, deep inside dense interstellar clouds that are impenetrable to optical light. Other objects for which SIMBA is especially suited include planet-forming disks of cold dust around nearby stars and extremely distant galaxies in the early universe, still in the stage of formation.

During the first observations, SIMBA was used to study the gas and dust content of star-forming regions in our own Milky Way Galaxy, as well as in the Magellanic Clouds and more distant galaxies. It was also used to record emission from planetary nebulae, clouds of matter ejected by dying stars. Moreover, attempts were made to detect distant galaxies and quasars radiating at mm-wavelengths and located in two well-studied sky fields, the "Hubble Deep Field South" and the "Chandra Deep Field" [1].

Observations with SEST and SIMBA also serve to identify objects that can be observed at higher resolution and at shorter wavelengths with future southern submm telescopes and interferometers such as APEX (see MPG ESO Press Release eso0114 of 6 July 2001) and ALMA.

Some of the recent SIMBA images are shown above; they were taken during test observations, and within a pilot survey of high-mass starforming regions.

Stars form in interstellar clouds that consist of gas and dust. The denser parts of these clouds can collapse into cold and dense cores which may form stars. Often many stars are formed in clusters, at about the same time.

Because the stars form deep inside the interstellar clouds, the obscuration at visible wavelengths is very high and it is not possible to see these regions optically. The objects selected for the SIMBA survey are from a catalog of objects, first detected at long infrared wavelengths with the IRAS satellite (launched in 1983), hence the designations indicated in the accompanying images.

From 1995 to 1998, the ESA Infrared Space Observatory (ISO) gathered an enormous amount of valuable data, obtaining images and spectra in the broad infrared wavelength region from 2.5 to 240 µm (0.025 to 0.240 mm), i.e. just shortward of the millimetre region in which SIMBA operates. ISO produced mid-infrared images of field size and angular resolution (sharpness) comparable to those of SIMBA.

It will obviously be most interesting to combine the images that will be made with SIMBA with imaging and spectral data from ISO and also with those obtained by large ground-based telescopes in the near- and mid-infrared spectral regions.

Some technical details about the SIMBA instrument

SIMBA is unique because of its ability to quickly map large sky areas due to the fast scanning mode. In order to achieve low noise and good sensitivity, the instrument is cooled to only 0.3 deg above the absolute zero, i.e., to -272.85 °C.

SIMBA consists of 37 horns (each providing one pixel on the sky) arranged in a hexagonal pattern, c.f. ESO Press Photo eso0131. To form images, the sky position of the telescope is changed according to a raster pattern - in this way all of a celestial object and the surrounding sky field may be "scanned" fast, at speeds of typically 80 arcsec per second. This makes SIMBA a very efficient facility: for instance, a fully sampled image of good sensitivity with a field size of 15 arcmin x 6 arcmin can be taken in 15 minutes. If higher sensitivity is needed (to observe fainter sources), more images may be obtained of the same field and then added together.

Large sky areas can be covered by combining many images taken at different positions. The image resolution (the "telescope beamsize") is 22 arcsec, corresponding to the angular resolution of this 15-metre telescope at the indicated wavelength.

[1] Observations of the HDFS and CDFS fields in other wavebands with other telescopes at the ESO observatories have been reported earlier, e.g. within the ESO Imaging Survey Project (EIS) (the "EIS Deep-Survey"). It is the ESO policy on these fields to make data public world-wide. 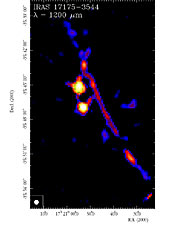 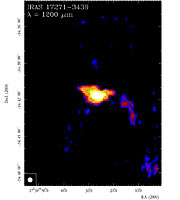 PR Image eso0131d
View of the SIMBA instrument
Send us your comments!
Subscribe to receive news from ESO in your language
Accelerated by CDN77
Terms & Conditions