It was a historical moment last night (September 3 - 4, 2000) in the VLT Control Room at the Paranal Observatory , after nearly 15 years of hard work. Finally, four teams of astronomers and engineers were sitting at the terminals - and each team with access to an 8.2-m telescope! From now on, the powerful "Paranal Quartet" will be observing night after night, with a combined mirror surface of more than 210 m 2. And beginning next year, some of them will be linked to form part of the unique VLT Interferometer with unparalleled sensitivity and image sharpness.

Early in the evening, the fourth 8.2-metre Unit Telescope, YEPUN, was pointed to the sky for the first time and successfully achieved "First Light".

Following a few technical exposures, a series of "first light" photos was made of several astronomical objects with the VLT Test Camera. This instrument was also used for the three previous "First Light" events for ANTU (May 1998), KUEYEN (March 1999) and MELIPAL (January 2000).

These images served to evaluate provisionally the performance of the new telescope, mainly in terms of mechanical and optical quality. The ESO staff were very pleased with the results and pronounced YEPUN fit for the subsequent commissioning phase.

When the name YEPUN was first given to the fourth VLT Unit Telescope, it was supposed to mean "Sirius" in the Mapuche language. However, doubts have since arisen about this translation and a detailed investigation now indicates that the correct meaning is "Venus" (as the Evening Star). For a detailed explanation, please consult the essay On the Meaning of "YEPUN", now available at the ESO website.

At 21:39 hrs local time (01:39 UT), YEPUN was turned to point in the direction of a dense Milky Way field, near the border between the constellations Sagitta (The Arrow) and Aquila (The Eagle). A guide star was acquired and the active optics system quickly optimized the mirror system. At 21:44 hrs (01:44 UT), the Test Camera at the Cassegrain focus within the M1 mirror cell was opened for 30 seconds, with the planetary nebula Hen 2-428 in the field.

The resulting "First Light" image was immediately read out and appeared on the computer screen at 21:45:53 hrs (01:45:53 UT). "Not bad! - "Very nice!" were the first, "business-as-usual"-like comments in the room. The zenith distance during this observation was 44° and the image quality was measured as 0.9 arcsec, exactly the same as that registered by the Seeing Monitoring Telescope outside the telescope building. There was some wind.

The ESO staff then proceeded to take a series of three photos with longer exposures through three different optical filtres. They have been combined to produce the image shown in ESO Press Photo eso0028.

More astronomical images were obtained in sequence, first of the dwarf galaxy NGC 6822 in the Local Group (see ESO Press Photo eso0028 below) and then of the spiral galaxy NGC 7793 .

All 8.2-metre telescopes now in operation at Paranal

The ESO Director General, Catherine Cesarsky, who was present on Paranal during this event, congratulated the ESO staff to the great achievement, herewith bringing a major phase of the VLT project to a successful end. She was particularly impressed by the excellent optical quality that was achieved at this early moment of the commissioning tests. A measurement showed that already now, 80% of the light is concentrated within 0.22 arcsec.

The manager of the VLT project, Massimo Tarenghi, was very happy to reach this crucial project milestone, after nearly fifteen years of hard work. He also remarked that with the M2 mirror already now "in the active optics loop", the telescope was correctly compensating for the somewhat mediocre atmospheric conditions on this night.

The next major step will be the "first light" for the VLT Interferometer (VLTI), when the light from two Unit Telescopes is combined. This event is expected in the middle of next year.

The mechanical structure of YEPUN was first pre-assembled at the Ansaldo factory in Milan (Italy) where it served for tests while the other telescopes were erected at Paranal. An early photo (ESO Press Photo eso9534) is available that was obtained during the visit of the ESO Council to Milan in December 1995, c.f. ESO Press Release eso9534. 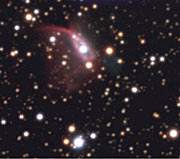 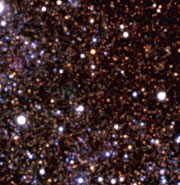