Discovery of Molecular Gas Shells around the Unusual Galaxy Centaurus A

Recent observations by an international team of astronomers [1] with the 15-metre Swedish-ESO Submillimetre Telescope at the La Silla observatory (Chile) have shown that the unusual, nearby galaxy Centaurus A is surrounded by shells in which carbon monoxide molecules are present. These new exciting results are the first of their kind. In addition to the intrinsic scientific value of this discovery, it also provides an instructive example of what will become possible for more distant galaxies with the projected Atacama Large Millimeter Array (ALMA), now in the planning phase.

Galaxies come in different shapes. Some of these take the form of more or less perfect spirals, some have the form of ellipsoids and still others have an irregular appearance.

One of the major differences between elliptical and spiral galaxies is that the former do not possess extensive gaseous discs in which young stars can be formed.

This is despite the fact that most elliptical galaxies are probably formed by the merger of two or more spiral galaxies. However, during such a process most of the gas in the spirals is either quickly turned into stars by massive bursts of star formation or is completely lost into the surrounding space.

Most galaxies are members of groups. Once they have been formed, massive elliptical galaxies in these often behave like "cannibals" by swallowing one or more smaller companion galaxies. Some vestiges of such an event may remain visible for a certain time after the merger, normally in the form of weak structures in the otherwise smooth light distribution over the elliptical galaxy.

These structures resemble the ripples or waves that develop on the water surface when you throw a small stone into a calm pond. While long-exposure photos show them as faint "rings" around the galaxy, they are in fact the projected images of three-dimensional structures and are often referred to as shells. By means of photometric and spectrographic studies of their light, it has been known since the early 1980's that such shells are made up of stars. It appears that they are quite common - about half of the nearby large elliptical galaxies have been found to be surrounded by stellar shells.

More recently, in 1994, atomic hydrogen gas was discovered to be associated with some of the stellar shells. This discovery was a bit of a surprise, because the current theory predicts that when two galaxies merge, their gas and stars will behave very differently. While the individual stars hardly ever hit each other, the interstellar gas clouds collide violently. They will lose all their energy and the gas will fall towards the common centre where it is soon consumed in vigorous bursts of star formation.

Why would there then be hydrogen gas in the outer shells of some elliptical galaxies?

A possible origin of gaseous shells

The astronomer team, headed by Vassilis Charmandaris [1] decided to look into this serious discrepancy between theory and observations. They believed that a possible explanation might be that this diffuse atomic gas is located, not in vast, very dilute clouds, but rather in smaller, much denser molecular clouds, such as these are known in our own galaxy, the Milky Way. Due to their relative compactness (more than 1000 molecules/cm 3, i.e,. at least 100 times more than that of larger diffuse clouds), molecular clouds would behave more like the stars during the galaxy collision event.

Indeed, realistic calculations showed that the dynamical behavior of such dense clouds would be intermediate between the stars and the diffuse hydrogen gas. Thus, while most of the gas would still end up in the centre of the remaining galaxy after a merger, a larger fraction of it would be able to survive at large distances from the nucleus. This would then be the origin of the observed hydrogen shells.

During the merger, gas that originates from regions in the outskirts of the "cannibalized" galaxy - and farther out than most of the stars - would be liberated earlier than the stars. As a consequence, one would also expect to observe a certain displacement between the gaseous and stellar shells.

In order to test this hypothesis, the astronomers decided to look for the possible presence in the shells around some nearby elliptical galaxies of specific gases that are typical of molecular clouds . The observations were carried out with the 15-metre Swedish-ESO Submillimetre Telescope (SEST) at the ESO La Silla Observatory (Chile). This telescope is the only one of its kind in the southern hemisphere and is particularly suited to register emissions from gases that are common in molecular clouds, e.g. those of carbon monoxide (CO) near a wavelength of 3 mm .

This search was successful, notably in the case of Centaurus A, a nearby giant elliptical galaxy with strong radio emission and an active nucleus (AGN), cf. ESO Press Photos eso0005b-c. For the first time, carbon monoxide molecules (CO) were found to be present in two of the surrounding shells, cf. ESO Press Photo eso0010 . These shells are located at a distance of about 50,000 light-years (15 kpc) from the nucleus of the galaxy and, as can be seen on the photo, the regions of the observed molecules appear to be aligned with the radio jet.

This important discovery supports the above mentioned hypothesis and thus provides an important clue as to why there can be gas very far from the centre of an elliptical galaxy after a collision/merger. It is therefore likely that a certain fraction of the gas in the "cannibalized" companion galaxy is made up by small and dense molecular clouds. During the collision, they behave similarly to the stars and end up by forming gaseous shells.

The fate of the gas in the shells

What is then the likely fate of these gaseous shells?

They are most certainly gravitationally well bound to the Centaurus A galaxy and cannot escape into the surrounding intergalactic space. But while the thin and diffuse hydrogen gas will probably move towards the galaxy centre fairly quickly, the more clumpy clouds and the molecular gas therein may remain in the outer shells during long periods. Over time though, also this gas will become less prominent, as the clouds slowly disperse.

The discovery of carbon monoxide in the shells around Centaurus A opens very interesting avenues for future research on the evolution of galaxies. However, observations like these are very challenging.

First of all, as there are comparatively small quantities of gas in most galaxy shells, such measurements require large radio telescopes with high-sensitivity receivers, as well as many hours of observation before sufficiently accurate results (i.e., signal-to-noise ratio) are obtained. In the present case, no less than 20 hours were needed to achieve the secure detection of the emission from CO molecules, as displayed in ESO Press Photo eso0010 .

Moreover, the angular resolution on the sky of the single 15-metre SEST dish is only about 44 arcsec (at the wavelengths of the observed CO lines around 3 mm). This makes it virtually impossible to obtain a clear view of the individual shells in distant galaxies with this telescope. On the other hand, in nearby targets such as Centaurus A, the shells extend over a comparatively large sky area and thus require large-scale mapping, a very time-consuming project.

The role of ALMA

However, exciting possibilities for more detailed studies, also of much more distant galaxies, are opening with the future Atacama Large Millimeter Array (ALMA) . The collecting area of ALMA is about 7000 m 2, or over 40 times larger than that of SEST. It will also achieve sub-arcsecond angular resolution when its 64 antennas are combined in the interferometric mode. Together, these properties of ALMA will allow much more sensitive and detailed observations of galaxies at larger distances.

When compared to earlier observations of CO near the centre of Centaurus A, the present SEST data show that about 10% of the molecular gas is far outside the centre of this galaxy. As a next step, it would be interesting to examine whether this is also true in other elliptical galaxies with gaseous shells. And will it be possible to detect other molecules in these shells?

There will certainly be no lack of opportunities for exciting research in this field, especially with the advent of ALMA, some years from now.

A research article about this project will appear in the European journal Astronomy & Astrophysics (Vol. 356); it is now available on the web at astro-ph/0003175. 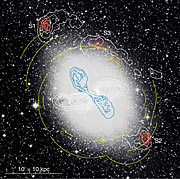 PR Image eso0010b
CO emission spectra for Centaurus A
Send us your comments!
Subscribe to receive news from ESO in your language
Accelerated by CDN77
Terms & Conditions