One Thousand "Wonderful" Stars Discovered in Centaurus A

An international team led by ESO astronomer Marina Rejkuba [1] has discovered more than 1000 luminous red variable stars in the nearby elliptical galaxy Centaurus A (NGC 5128). Brightness changes and periods of these stars were measured accurately and reveal that they are mostly cool long-period variable stars of the so-called "Mira-type." The observed variability is caused by stellar pulsation. This is the first time a detailed census of variable stars has been accomplished for a galaxy outside the Local Group of Galaxies (of which the Milky Way galaxy in which we live is a member). It also opens an entirely new window towards the detailed study of stellar content and evolution of giant elliptical galaxies . These massive objects are presumed to play a major role in the gravitational assembly of galaxy clusters in the Universe (especially during the early phases). This unprecedented research project is based on near-infrared observations obtained over more than three years with the ISAAC multi-mode instrument at the 8.2-m VLT ANTU telescope at the ESO Paranal Observatory.

Among the stars that are visible in the sky to the unaided eye, roughly one out of three hundred (0.3%) displays brightness variations and is referred to by astronomers as a "variable star". The percentage is much higher among large, cool stars ("red giants") - in fact, almost all luminous stars of that type are variable. Such stars are known as Mira-variables ; the name comes from the most prominent member of this class, Omicron Ceti in the constellation Cetus (The Whale), also known as "Stella Mira" (The Wonderful Star). Its brightness changes with a period of 332 days and it is about 1500 times brighter at maximum (visible magnitude 2 and one of the fifty brightest stars in the sky) than at minimum (magnitude 10 and only visible in small telescopes) [2].

Stars like Omicron Ceti are nearing the end of their life. They are very large and have sizes from a few hundred to about a thousand times that of the Sun. The brightness variation is due to pulsations during which the star's temperature and size change dramatically.

In the following evolutionary phase, Mira-variables will shed their outer layers into surrounding space and become visible as planetary nebulae with a hot and compact star (a "white dwarf") at the middle of a nebula of gas and dust.

Several thousand Mira-type stars are currently known in the Milky Way galaxy and a few hundred have been found in other nearby galaxies, including the Magellanic Clouds.

The peculiar galaxy Centaurus A

Centaurus A (NGC 5128) is the nearest giant galaxy, at a distance of about 13 million light-years. It is located outside the Local Group of Galaxies to which our own galaxy, the Milky Way, and its satellite galaxies, the Magellanic Clouds, belong.

Centaurus A is seen in the direction of the southern constellation Centaurus. It is of elliptical shape and is currently merging with a companion galaxy, making it one of the most spectacular objects in the sky, cf. ESO Press Photo eso0315 . It possesses a very heavy black hole at its centre and is a source of strong radio and X-ray emission.

During the present research programme, two regions in Centaurus A were searched for stars of variable brightness; they are located in the periphery of this peculiar galaxy, cf. eso0315b . An outer field ("Field 1") coincides with a stellar shell with many blue and luminous stars produced by the on-going galaxy merger; it lies at a distance of 57,000 light-years from the centre. The inner field ("Field 2") is more crowded and is situated at a projected distance of about 30,000 light-years from the centre..

Under normal circumstances, any team of professional astronomers will have access to the largest telescopes in the world for only a very limited number of consecutive nights each year. However, extensive searches for variable stars like the present require repeated observations lasting minutes-to-hours over periods of months-to-years. It is thus not feasible to perform such observations in the classical way in which the astronomers travel to the telescope each time.

Fortunately, the operational system of the VLT at the ESO Paranal Observatory (Chile) is also geared to encompass this kind of long-term programme. Between April 1999 and July 2002, the 8.2-m VLT ANTU telescope on Cerro Paranal in Chile) was operated in service mode on many occasions to obtain K-band images of the two fields in Centaurus A by means of the near-infrared ISAAC multi-mode instrument. Each field was observed over 20 times in the course of this three-year period ; some of the images were obtained during exceptional seeing conditions of 0.30 arcsec. One set of complementary optical images was obtained with the FORS1 multi-mode instrument (also on VLT ANTU) in July 1999.

Each image from the ISAAC instrument covers a sky field measuring 2.5 x 2.5 arcmin 2. The combined images, encompassing a total exposure of 20 hours are indeed the deepest infrared images ever made of the halo of any galaxy as distant as Centaurus A, about 13 million light-years.

Once the lengthy observations were completed, two further steps were needed to identify the variable stars in Centaurus A .

First, each ISAAC frame was individually processed to identify the thousands and thousands of faint point-like images (stars) visible in these fields. Next, all images were compared using a special software package ("DAOPHOT") to measure the brightness of all these stars in the different frames, i.e., as a function of time.

While most stars in these fields as expected were found to have constant brightness, more than 1000 stars displayed variations in brightness with time; this is by far the largest number of variable stars ever discovered in a galaxy outside the Local Group of Galaxies.

The detailed analysis of this enormous dataset took more than a year. Most of the variable stars were found to be of the Mira-type and their light curves (brightness over the pulsation period) were measured, cf. ESO Press Photo eso0315 . For each of them, values of the characterising parameters, the period (days) and brightness amplitude (magnitudes) were determined. A catalogue of the newly discovered variable stars in Centaurus A has now been made available to the astronomical community via the European research journal Astronomy & Astrophysics.

Marina Rejkuba is pleased and thankful: "We are really very fortunate to have carried out this ambitious project so successfully. It all depended critically on different factors: the repeated granting of crucial observing time by the ESO Observing Programmes Committee over different observing periods in the face of rigorous international competition, the stability and reliability of the telescope and the ISAAC instrument over a period of more than three years and, not least, the excellent quality of the service mode observations, so efficiently performed by the staff at the Paranal Observatory."

What have we learned about Centaurus A?

The present study of variable stars in this giant elliptical galaxy is the first-ever of its kind. Although the evaluation of the very large observational data material is still not finished, it has already led to a number of very useful scientific results.

Confirmation of the presence of an intermediate-age population

Based on earlier research (optical and near-IR colour-magnitude diagrams of the stars in the fields), the present team of astronomers had previously detected the presence of intermediate-age and young stellar populations in the halo of this galaxy. The youngest stars appear to be aligned with the powerful jet produced by the massive black hole at the centre.

Some of the very luminous red variable stars now discovered confirm the presence of a population of intermediate-age stars in the halo of this galaxy. It also contributes to our understanding of how giant elliptical galaxies form.

New measurement of the distance to Centaurus A

The pulsation of Mira-type variable stars obeys a period-luminosity relation. The longer its period, the more luminous is a Mira-type star.

This fact makes it possible to use Mira-type stars as "standard candles" (objects of known intrinsic luminosity) for distance determinations. They have in fact often been used in this way to measure accurate distances to more nearby objects, e.g., to individual clusters of stars and to the center in our Milky Way galaxy, and also to galaxies in the Local Group, in particular the Magellanic Clouds.

This method works particularly well with infrared measurements and the astronomers were now able to measure the distance to Centaurus A in this new way. They found 13.7 ± 1.9 million light-years, in general agreement with and thus confirming other methods.
Study of stellar population gradients in the halo of a giant elliptical galaxy

The two fields here studied contain different populations of stars. A clear dependence on the location (a "gradient") within the galaxy is observed, which can be due to differences in chemical composition or age, or to a combination of both.

Understanding the cause of this gradient will provide additional clues to how Centaurus A - and indeed all giant elliptical galaxies - was formed and has since evolved.

Comparison with other well-known nearby galaxies

Past searches have discovered Mira-type variable stars thoughout the Milky Way, our home galaxy, and in other nearby galaxies in the Local Group. However, there are no giant elliptical galaxies like Centaurus A in the Local Group and this is the first time it has been possible to identify this kind of stars in that type of galaxy.

The present investigation now opens a new window towards studies of the stellar constituents of such galaxies .

[2] Mira ( Omicron Ceti ), a cool red giant star, is one of the most famous variable stars in the sky. David Fabricius (East Friesland, Germany) is recognized to have discovered it in 1596 while searching for planet Mercury. In 1638, Johann Holwarda from the same area determined its period to be 11 months and so established it as the first long-period variable discovered. In 1642, Johannes Hevelius (Danzig, now Poland) named the star Mira , "The Wonderful". It has later been found to be a binary star system. An entire class of variable stars has been named after this star. By astronomical definition, "Mira-type" stars are variables with a period of around 100 - 1000 days and with visual light variations of more than 2.5 magnitudes. .

The research described in this press release is presented in a research article, soon to appear in the European research journal Astronomy & Astrophysics ("Long Period Variables in NGC 5128: I. Catalogue" by Marina Rejkuba et al.). It is available on the web as astro-ph/0305432 .

The ISAAC multi-mode instrument at the 8.2-m VLT ANTU telescope at the ESO Paranal Observatory. 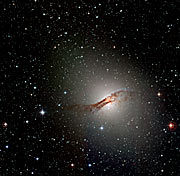 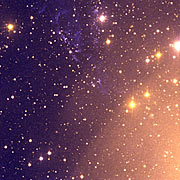 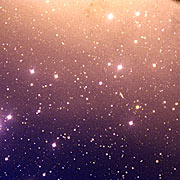 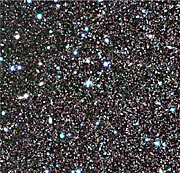 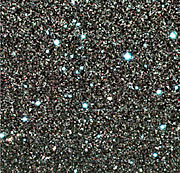 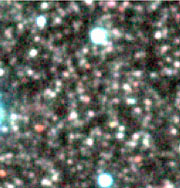 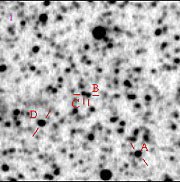