Ready to rewind the tape once more? After a one-week break, let’s go back to the 29th of October 2001 on Cerro Paranal in the Atacama Desert, when two of ESO’s 8.2-m telescopes were about to be linked for the first time with the Very Large Telescope Interferometer (VLTI). To celebrate the twentieth anniversary of those historical moments, last week we heard the memories of two scientists who experienced that night in person. Today, we close the circle and listen to two other scientists in the extraordinary team that made this possible.

If you missed our previous post in this two-part series you may be wondering why we want to combine the light of several telescopes. The larger a telescope is, the finer the details it can discern. By linking two or more telescopes we can create a giant “virtual” telescope as large as the separation between them. This technique, called interferometry, allows us to resolve details much smaller than what is possible with each individual telescope alone.

When lightwaves from two different telescopes pointing at the same target meet, they interfere, creating bright and dark stripes. These so-called “fringes” contain information about the size of the object being observed; linking several telescopes at different separations and orientations is necessary to reconstruct an image of said object. This is easier said than done, though, and recording fringes with ESO’s 8.2-m Unit Telescopes (UTs) took years of preparation... 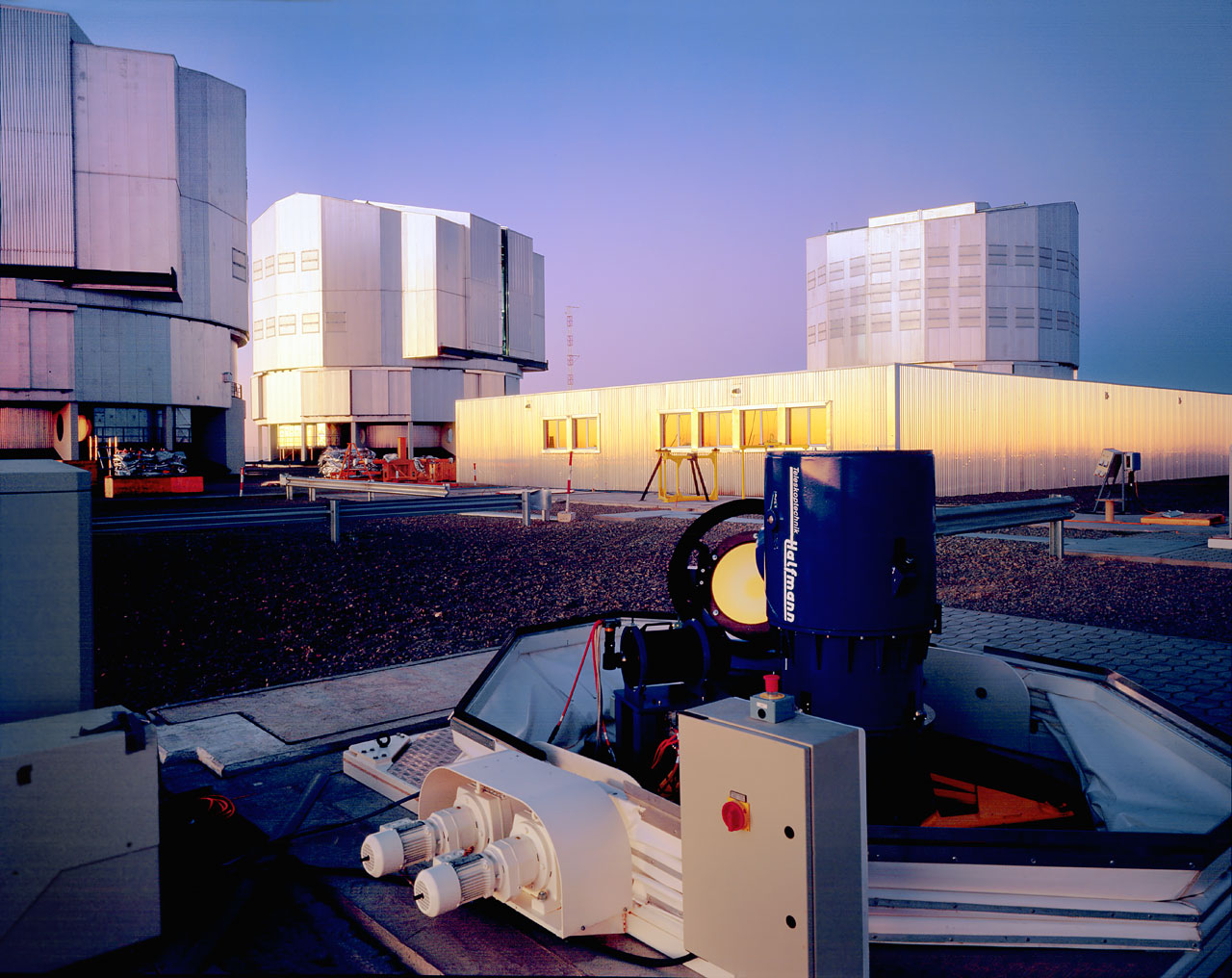 One of the two 0.3-m siderostats used for the initial tests of the VLTI.
Credit: ESO

“We could see the first fringes with the two UTs within the first few hours of the night,” remembers Philippe Gitton, an optical engineer at ESO. “It was quick and may have looked easy, but it was the result of many, many years of preparatory activities.”

A key preparation step took place a few months earlier: the observation of the first fringes with two small test telescopes called siderostats, which was by no means a walk in the park.

“It took us two and a half nights to see the fringes with the siderostats and people were starting to be worried that something could be wrong,” says Philippe. “Most of us were working day and night, doing technical work during the day and observing at night, so we were very tired. There were two rooms in the VLTI building where we were working, and I remember people napping on couches or chairs in one of the two rooms. And then at a certain point we got woken up because nice fringes had just popped up, it was amazing! This moment for me is present as if it was last night!”

But the fact that it took two and a half days for this process, much longer than the team expected, meant that something was off. But what could that be?

It turned out that the problem was the length of the paths that the two light beams had to cover between the star and the instruments. “You have to make sure that at any time the lengths of the two paths are exactly the same, or you won’t be able to successfully combine the beams,” explains Philippe. “This is very challenging, because stars move in the sky as the Earth rotates, so we have to constantly adjust the positioning of the instruments within a fraction of the wavelength of the collected light. Since the VLTI observes infrared radiation, this means we have to be accurate down to a thousandth of a millimetre.”

How did Philippe and the rest of the team understand where the error in the length of the paths came from? “We suspected that the map of the Paranal grid, which defined where we had installed the siderostats, was not correct,” he says, “so we actually measured the alignment of the grid by looking at stars at night and determining the position of the North with a theodolite… just like sailors on boats with sextants centuries ago! We found the orientation of the grid to be a fraction of a degree off, meaning we were around 200 millimetres off with our instrumentation… an offset which made us wait two and a half nights to see the first fringes!”

After the first fringes with the siderostats, the team focused on getting ready for the fringes with the UTs. And indeed, six months later the VLTI finally opened its eyes. “I remember someone said that ‘I will never look at stars anymore as points’ as now we can see their shape, we can see they are disks,” concludes Philippe. 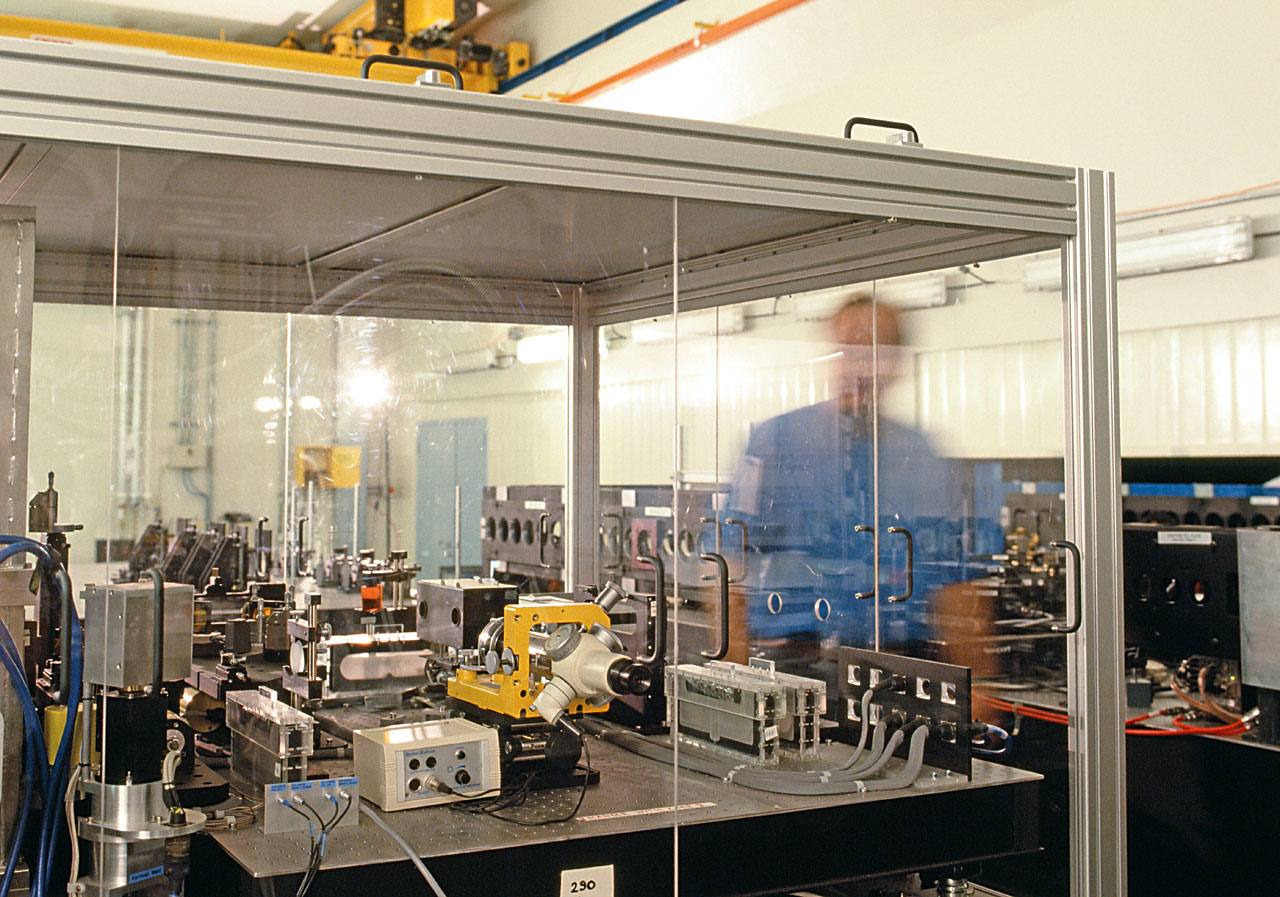 “There were quite a lot of people that night, and we had a lot of fun afterwards. It's always great when you have done something new,” remembers Markus Schöller, a staff astronomer at ESO who uses the VLTI to study binary systems of stars orbiting each other

“Since the first fringes, we have tested a lot of VLTI instruments in that room. There were empty bottles of champagne with the names of the instruments and the dates they were commissioned on them,” continues Markus.

The first instrument was VINCI, followed by MIDI in December 2002, both able to combine the light of two telescopes. “Just two telescopes because it's easier, and before you run, you first want to walk,” says Markus.

MIDI was ideal for observing the dusty environment around young and evolved stars, and around black holes at the centres of galaxies. But like for VINCI, the fact that it could only combine two telescopes meant there were important limitations to what it could actually achieve.

“With two telescopes you can only figure out symmetric structures. This means that if you are observing two stars and one has a spot on its surface, you will never be able to say where it is,” Markus adds. 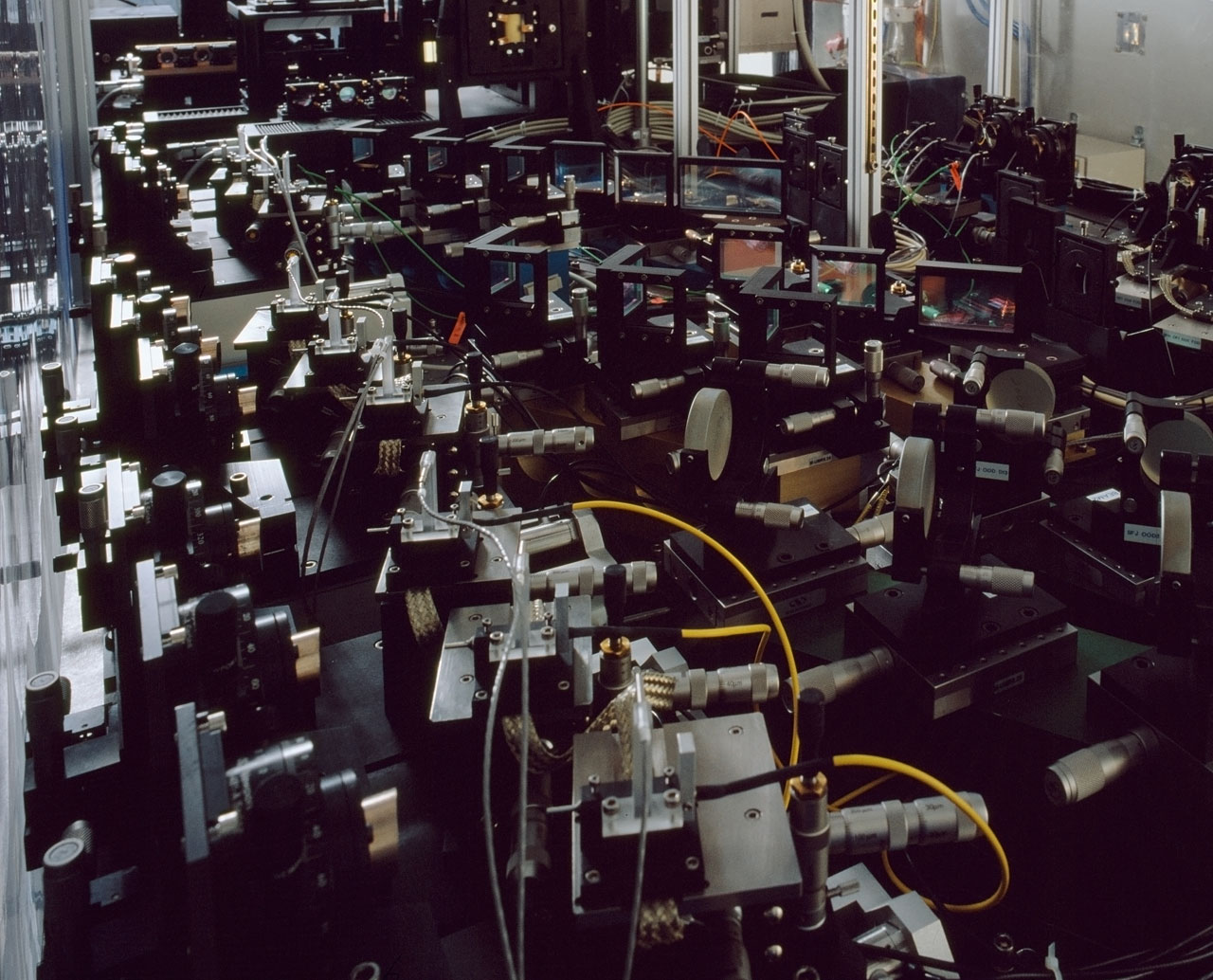 A major step forward in this regard was AMBER, an instrument which saw first light in March 2004 and was capable of combining the light of three telescopes. Thanks to its better ability to detect very fine detail, AMBER has allowed astronomers to discover large bubbles of gas moving in the atmosphere of the red supergiant star Betelgeuse, for example.

But wait: how do astronomers decide when the UTs are used as standalone telescopes or combined with the VLTI? “With interferometers we're looking at bright stars, so we don't care so much about the Moon,” says Markus [1]. “So, if you go and look into every VLT observation schedule, the VLTI is always around the full Moon. That means that your whole life is driven by the Moon. We had years where every full Moon or let's say 10 out of 12 full Moons we were doing something technical to the interferometer and I was at Paranal 90% of the time.” It’s not only werewolves who are strongly influenced by the full Moon!

The end of a journey is the beginning of another

The first fringes seen with the two UTs, which concluded the long design and test phase, marked the beginning of the journey for the VLTI.

Between 2004 and 2006, four 1.8-metre diameter Auxiliary Telescopes (ATs) were installed at Paranal and joined the VLTI. The ATs combine their light similarly to the UTs, with the first fringes with two ATs being observed in February 2005. But unlike the UTs, the ATs are not static and can be moved to 30 different positions across the platform, up to 200 metres [2], enabling the VLTI to probe cosmic objects 25 times more sharply than with the individual UTs.

And the improvements didn’t end here: a new generation of instruments was installed between 2010 and 2018, all currently operational: MATISSE, PIONIER and GRAVITY, all of them able to connect four telescopes.

Image taken on 17 March 2011, when all four UTs were used together for the first time in the VLTI. All telescope are pointing at the same target, although this isn’t obvious due to the distortion of the panorama.
Credit: G.Hüdepohl (atacamaphoto.com)/ESO

Over its two decades of activity, the VLTI has helped us deepen our understanding of many research fields in astronomy by collecting a stunning series of groundbreaking results, such as the ​​first direct observation of an exoplanet using optical interferometry, the best ever image of a star’s surface and atmosphere, the sharpest view of a dusty disc around an aging star, or testing general relativity close to the black hole at the centre of our galaxy.

Yet the VLTI is not tired of collecting scientific results, and it continues to unveil the secrets of the cosmos and help humanity understand its place in it. “I personally think the future of the VLTI is super bright,” concludes Markus. “Twenty years ago, I would have not even dreamed what we’ve achieved so far, and what people are thinking to do in the next 10 or 15 years, I would have thought it was pure science fiction.”

For what you have done and will do, thank you, VLTI!

[1] Observations of faint objects with the standalone UTs require a dark sky with little or no moonlight. Wavelength also plays a role: at optical wavelengths, moonlight is scattered around and makes the sky brighter. Infrared light isn’t scattered as much; moreover, at these wavelengths the brightness of the sky is due to the thermal emission of the atmosphere. Because the VLTI observes bright sources at infrared wavelengths, observations using the UTs are scheduled around full Moon. The rest of the time, the VLTI uses the smaller Auxiliary Telescopes.

[2] Currently the length of the delay lines only allows to use baselines up to 140 m long, but there are ongoing works to extend this up to 200 m.

Giulio Mazzolo is a science journalism intern at ESO. Before starting a career in science communication, he completed a PhD in astrophysics from the Max Planck Institute for Gravitational Physics in Hannover (Germany) and has been a member of the LIGO Scientific Collaboration.