Behind the scenes at ESO: Showing you the road to the stars
What you’ll discover in this blog post:
A team of scientists are currently using ESO’s Very Large Telescope to survey the largest asteroids in the Solar System. Nicknamed HARISSA, the survey has recently gathered lots of information on asteroid Psyche, special because of its metallic nature. In this week’s blog post the team behind the project explain what Psyche can tell us about the history of the Solar System, and how their research will feed into a NASA mission to study the same asteroid.

Q. Firstly, could you tell us a bit about the HARISSA survey.

Pierre (P): We are finding out more about some of the largest asteroids in the Asteroid Belt using the SPHERE instrument on the Very Large Telescope (VLT). With the VLT, we can see surface features such as craters, allowing us to carry out geology and geophysics from here on Earth for the first time ever. Craters tell us more about the age and collisional history of each asteroid, as a higher number of craters imply an older surface or more violent past. They can also hint at an asteroid’s internal structure.

Franck (F): We have been observing asteroids for years using the W.M. Keck Observatory, so when we found out about the VLT’s next-generation adaptive optics system, we couldn’t wait to use it to image asteroids with a much better resolution — four times sharper than that of the Hubble Space Telescope! The survey is still ongoing, and more data is coming, so we hope that there will be some interesting results in the future.

The Milky Way stretching over the four Unit Telescopes that make up the Very Large Telescope.
Credit: John Colosimo (colosimophotography.com)/ESO

Q. So you observed Psyche as part of this HARISSA survey — could you give us a brief overview of how you observed this asteroid and what you found out?

P: We combined our VLT observations from May this year with additional data from the last 20 years, many of which came from amateur astronomers! In total, we had 206 data sets for Psyche, and we fed them all into an algorithm to find out about its size and shape. We discovered that it is 226 kilometres wide, with two particularly interesting features — one very bright patch and one huge crater almost half the size of the asteroid itself.

F: We named the bright patch Panthia and the crater Meroe after the twin witches in the story Metamorphosis, which Psyche’s name also comes from. We also looked for a moon, because measuring a moon’s orbit could give us a good estimate of Psyche’s mass. But we are now almost certain that Psyche hosts no moons larger than one kilometre in diameter.

Images of Psyche from the HARISSA survey, with Meroe and Panthia highlighted.
Credit: ESO/LAM

Q. Could you tell us a bit about asteroids? What are they and why should we study them?

P: Most asteroids live in the Asteroid Belt between Mars and Jupiter. But we believe that they actually formed in a wider range of locations. Some are very rocky, and probably formed closer to the Sun, and some are more icy, having probably formed further out, between Jupiter and Neptune. There are clear differences between these icy and rocky bodies — rocky asteroids are covered in craters, but the presence of ice smooths these scars on the icy asteroids. Rarer, metal-rich asteroids also exist.

Psyche is much richer in metals than other asteroids, which implies that it formed a very long time ago

Q. Why did you decide to investigate this particular asteroid? Why is it interesting?

P: Psyche is much richer in metals than other asteroids, which implies that it formed a very long time ago. Being part of the first generation of planetary building blocks means that it could be useful for understanding the early Solar System.

F: Also, past radar observations implied that this asteroid is a metallic world with a metal-rich surface. These types of asteroids are rare compared to rocky and icy asteroids. We are trying to observe all types of asteroids through the HARISSA programme, and Psyche is one of the few large metallic asteroids believed to exist.

F: But actually, we were surprised that our observations showed Psyche to be a mesosiderite asteroid, meaning it is a mixture of metal and rock. Mesosiderite meteorites make up just 0.7% of the meteorites found on Earth, making them even rarer than purely metallic meteorites. This leads us to wonder which asteroids they came from and where these parent bodies were formed. And now we consider that Psyche could be the source of these meteorites!

P: It is possible that mesosiderite asteroids are the result of a collision between small molten objects and a large asteroid early in the history of the Solar System, or maybe they arose from the breakup and reassembly of a large asteroid. Understanding the formation of Psyche with a dedicated NASA mission will hopefully shed some light on this mystery to tell us more about the early Solar System. That’s really exciting!

Artist’s impression of the Solar System. The Asteroid Belt lies between Mars and Jupiter.
Credit: The International Astronomical Union/Martin Kornmesser
Although we have found out a lot from ground-based observations, some measurements can only be done in situ

Q. So why is NASA sending a spacecraft to Psyche?

P: Metal-rich asteroids have not been observed in much detail before. And although we have found out a lot from ground-based observations, some measurements can only be done in situ, for example analysing the composition of the rock to find out what elements are on the surface and measuring the magnetic field around Psyche. The NASA spacecraft will carry instruments that can do these things. It will also measure Psyche’s gravity to find out about its interior, possibly helping us determine whether the asteroid formed as a result of a collision.

F: Metal-rich asteroids are like a missing piece in the puzzle of our understanding of the formation of the Solar System. And one topic that comes up quite a lot at the moment is asteroid mining. These metal-rich objects are the type that we would mine for precious metals that are becoming more difficult to collect on Earth. But first, we need to answer questions like: how much metal is in the rock? how could we go about extracting it? Moral questions surround asteroid mining, but at least if we understand the science, we can get a broader view of the situation.

Artist’s impression of the NASA Psyche mission, due to launch in 2022
Credit: SSL/ASU/P. Rubin/NASA/JPL-Caltech

Q. Will your observations be useful for the NASA mission?

F: By carrying out the first exploration of the asteroid, we observed some things that will be very useful for the Psyche mission team, for example, we now know that there is no large moon for the spacecraft to potentially collide with. We also found that the features on the surface vary by about 10% in brightness; this knowledge will help the Psyche team tune their instruments to clearly see surface features — just like when your camera has to adjust to different light levels here on Earth.

NASA will use all this information to optimise their mission. For example, they might plan to start by studying the most interesting geophysical areas — Meroe or Panthea, perhaps — as they don’t know exactly how long the spacecraft will survive in deep space. They want to get the most interesting results right at the beginning!

Q. What do you hope to do in the future?

P: Psyche is moving closer to Earth, so in a few months it will be even larger than when we first observed it. If the HARISSA programme is extended, we hope to get additional observations; new images would allow us to see other sides of the asteroid that weren’t visible when we first observed it in May, meaning we could identify and map new features.

F: We would also like to use the Extremely Large Telescope (ELT) to image this asteroid. The resolution will initially be two to three times better than that of the VLT, so we would be able to see small details on the surface, and to spot if there is a tiny moon. We already have images of the surfaces of the very largest asteroid belt objects, but the ELT will allow us to clearly spot craters on the surfaces of more than 100 asteroids!

We would also like to use the ELT to image this asteroid... we would be able to see small details on the surface, and to spot if there is a tiny moon. 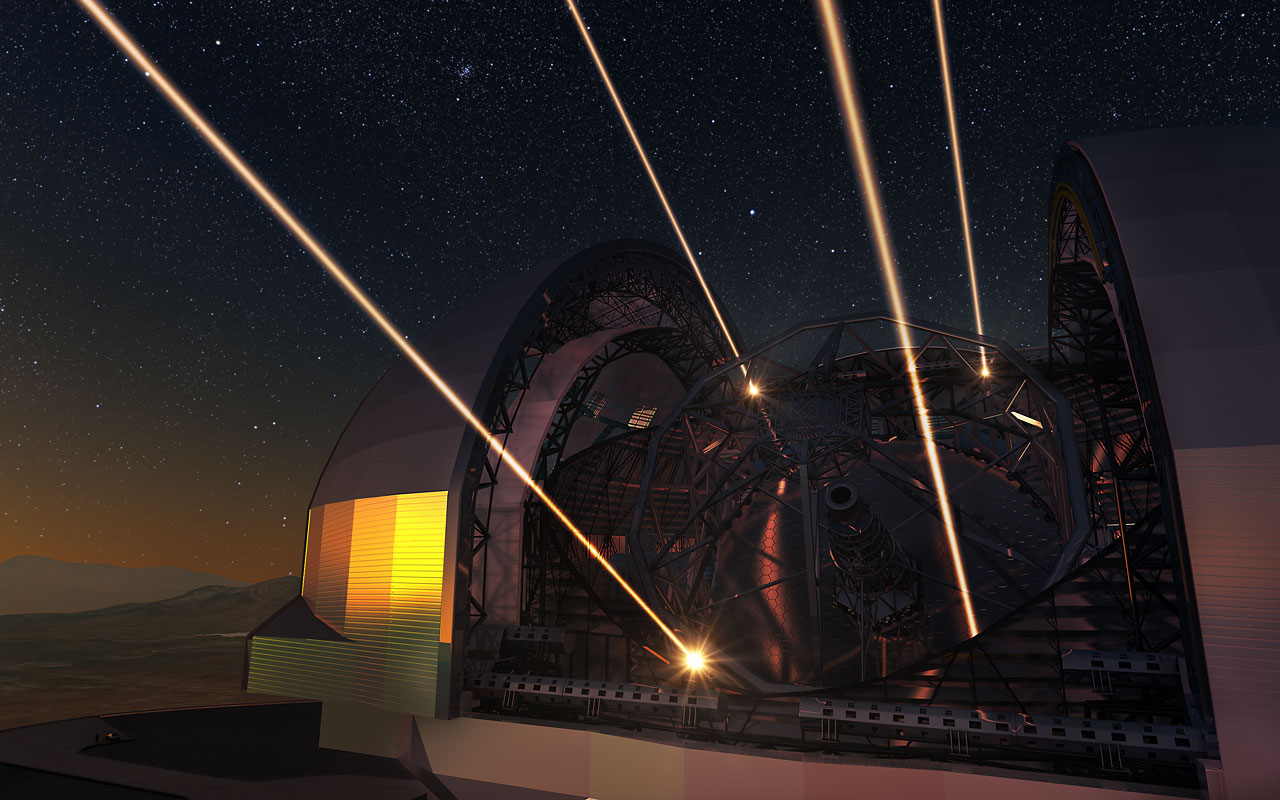 Franck Marchis is a senior planetary astronomer and chair of the exoplanet group at the Carl Sagan Center of the SETI Institute and Chief Scientific Officer and co-founder of Unistellar. Over the past nineteen years, he has dedicated his work to the study of the Solar System, specifically the search for asteroids with moons using mainly ground-based telescopes equipped with adaptive optics (AO). More recently he has been also involved in the definition of new generation of AOs for 8–10 metre-class telescopes.

Pierre Vernazza is a researcher at the Laboratoire d’Astrophysique de Marseille (France) and Principal Investigator of the HARISSA survey. Over the past decade, Pierre has studied the surface composition of asteroids to constrain their origin and is now interested in learning more about their internal structure and past collisional history.