Behind the scenes at ESO: Showing you the road to the stars
What you’ll discover in this blog post:
Astronomers have discovered thousands of exoplanets –– planets orbiting stars other than the Sun. When looking for the chemical fingerprints that life might have left in the atmospheres of these worlds, astronomers have turned to an unlikely ally: the Moon. Lunar eclipses like the one we will see on May 26 allow us to study the Earth’s atmosphere in the same way we do with exoplanets, which will help us recognise the signatures of life when we eventually find them.
At the time of writing, the number of confirmed exoplanets is 4383, but this figure might be outdated by the time you get to read this.

A planet where it rains iron. Another one where a year lasts only 18 hours. One that orbits two suns. You would be forgiven for thinking that these alien worlds belong to a science-fiction show, but these are very real planets that astronomers have actually found around other stars.

The first of these strange new worlds were discovered in 1992 by Aleksander Wolszczan and Dale Frail, who found two planets orbiting a pulsar, the rapidly rotating corpse of a massive star; a third planet was confirmed shortly afterwards. Three years later Michel Mayor and Didier Queloz found the first planet orbiting a Sun-like star, a discovery that earned them the Nobel Prize in Physics in 2019. At the time of writing, the number of confirmed exoplanets is 4383, but this figure might be outdated by the time you get to read this.

Astronomers are keen on studying the atmospheres of these worlds, searching for biomarkers –– chemical signatures that might be tell-tale signs of life. But how do they do this?

When an exoplanet crosses in front of its parent star, as seen from Earth, it blocks part of the starlight, causing a small but measurable dip in the star’s brightness. These so-called transits can be found by observing the same patches of the sky over and over, looking for stars that periodically blink.

This artist´s impression shows how the intensity of the light of a star varies when a planet transits its disc.
Credit: ESO/L. Calçada

When the light of a star passes through the atmosphere of a transiting exoplanet it is partially scattered and absorbed. Haze scatters blue colours more efficiently than red ones, making starlight somewhat redder –– just like Earth’s atmosphere makes the Sun look red at sunrise or sunset. In addition to that, different atoms and molecules in the atmosphere of an exoplanet will absorb very specific colours. Using spectroscopy, a technique that decomposes light into its constituents colours or wavelengths, it is thus possible to analyse the fingerprint left by an exoplanet’s atmosphere on the light of the host star. 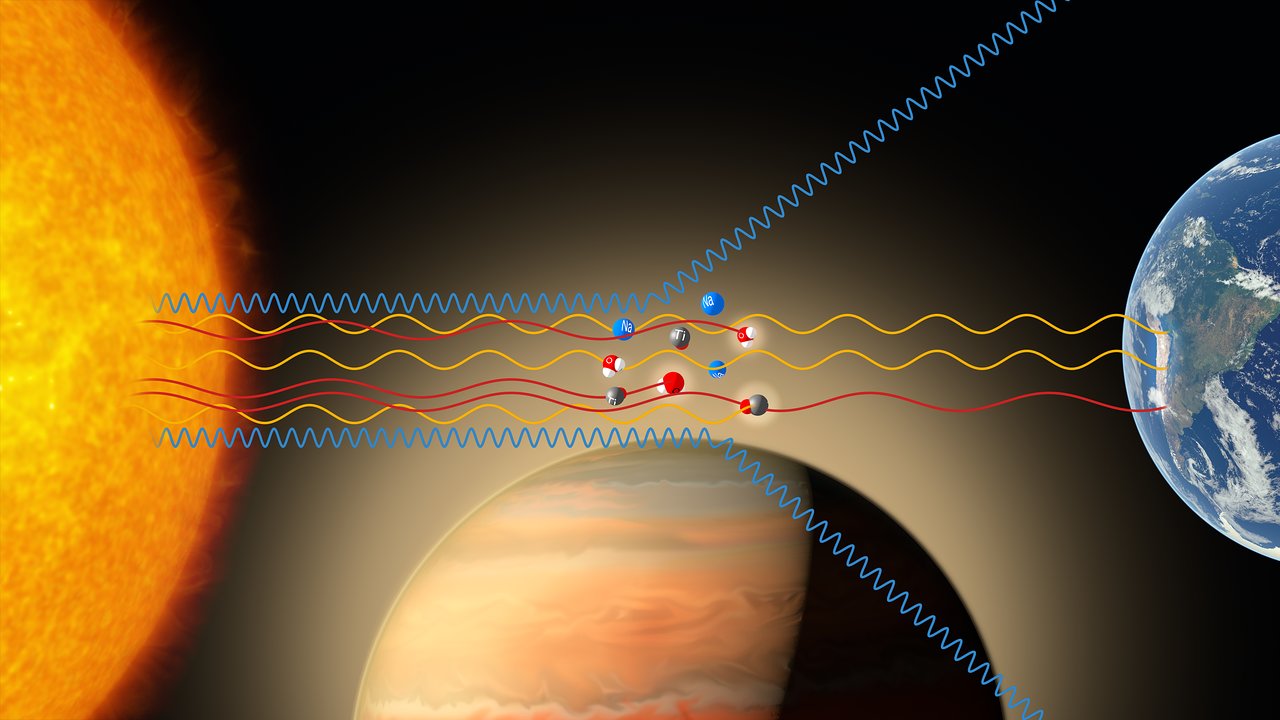 Molecules like ozone or oxygen, among others, are often called “biomarkers”: when found in the right amounts they could signal the presence of life. But what does the spectrum of an inhabited planet actually look like? Well, so far we only know one such planet: Earth. So how can we observe the Earth as if it was an exoplanet? By using the Moon as a mirror.

How can we observe the Earth as if it was an exoplanet? By using the Moon as a mirror.

In a lunar eclipse, the Sun, Earth and Moon are aligned, and the Moon moves into the Earth’s shadow. If the Earth didn’t have an atmosphere the Moon would appear pitch black. But Earth’s atmosphere redirects sunlight towards the Moon, and since blue light is scattered away more easily than red light, which passes through almost unimpeded, the Moon is bathed with red sunlight. If you stood on the Moon during a lunar eclipse, the Earth would appear surrounded by a glowing ring of light: you would be witnessing infinite sunrises and sunsets all over the planet.

By analysing the sunlight that illuminates the eclipsed Moon, after having passed through Earth’s atmosphere, we can look for the chemical fingerprints of different atoms and molecules, just like we do with transiting exoplanets. 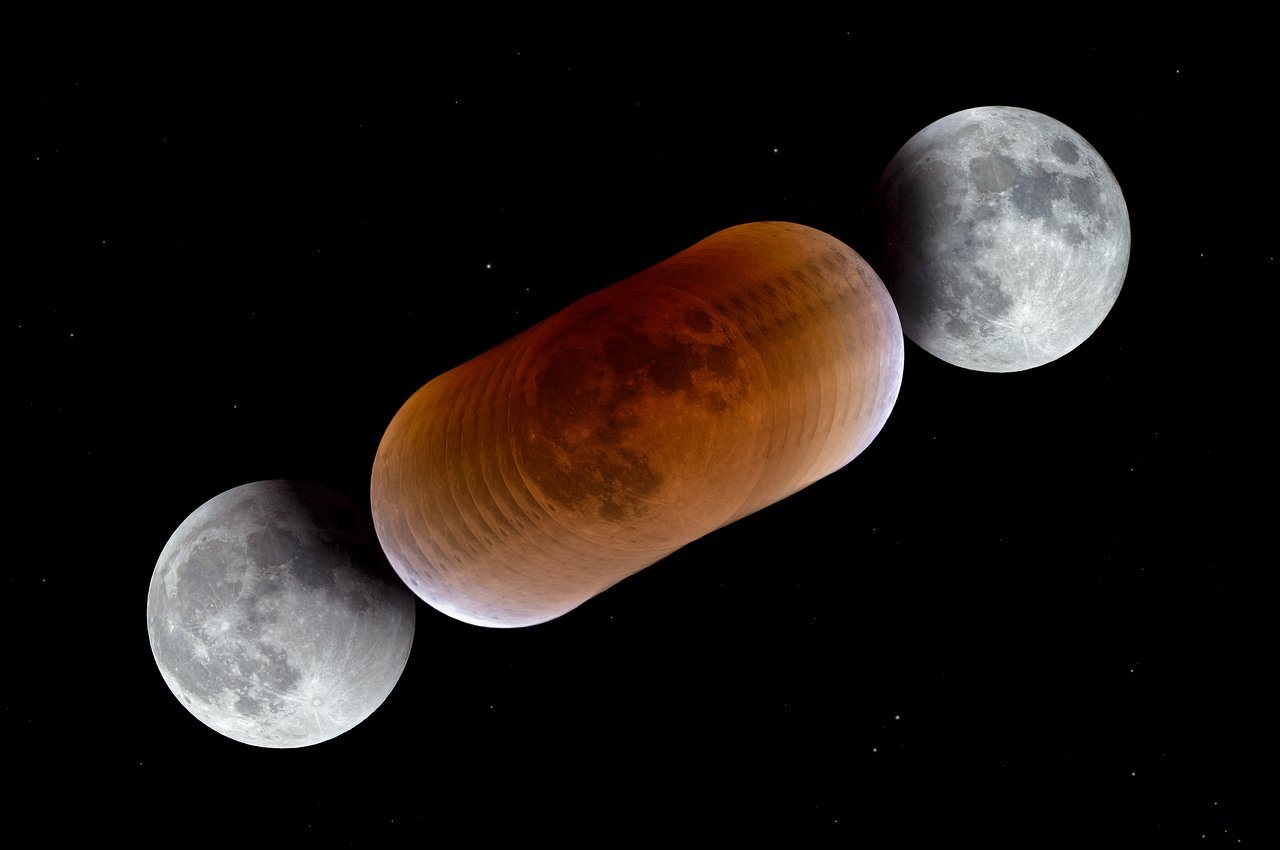 This image shows the Moon at various stages during a total lunar eclipse in January 2018. The Moon turns red during a lunar eclipse because it is illuminated by light that has passed through the Earth´s atmosphere. This reddish colour has therefore led to a lunar eclipse being known as a "Blood Moon".
Credit: P. Horálek/ESO
By analysing the sunlight that illuminates the eclipsed Moon, after having passed through Earth’s atmosphere, we can look for the chemical fingerprints of different atoms and molecules.

Spectroscopic observations of lunar eclipses are over a century old, but detailed studies are surprisingly recent. In 2008, a team of astronomers led by Enric Pallé used telescopes at the Roque de Los Muchachos Observatory in La Palma, Spain, to observe a lunar eclipse. Their results clearly indicate the presence of ozone, oxygen, water vapour, methane and carbon dioxide, in the relative amounts one expects to find in a planet that harbours life. Another group led by Luc Arnold performed similar observations of another lunar eclipse in 2010. They used the UVES and HARPS spectrogrographs at ESO’s Very Large Telescope and 3.6-metre telescope in Chile, respectively, and found ozone, oxygen and water vapour. Even the Hubble Space Telescope has had a go at this: in 2019, Allison Youngblood and her team performed the first-ever space-based observations of a lunar eclipse, aiming to find ultraviolet spectral features of ozone that are harder to detect from the ground.

But even when it’s not eclipsed, the Moon still helps us look for signs of life on Earth. If you have ever looked carefully at the thin crescent Moon you may have noticed that the dark portion is actually faintly lit. This is called earthshine, and it’s sunlight reflected off the Earth towards the Moon, and then back to us. This reflected sunlight also carries the chemical signature of the various molecules present in our atmosphere. 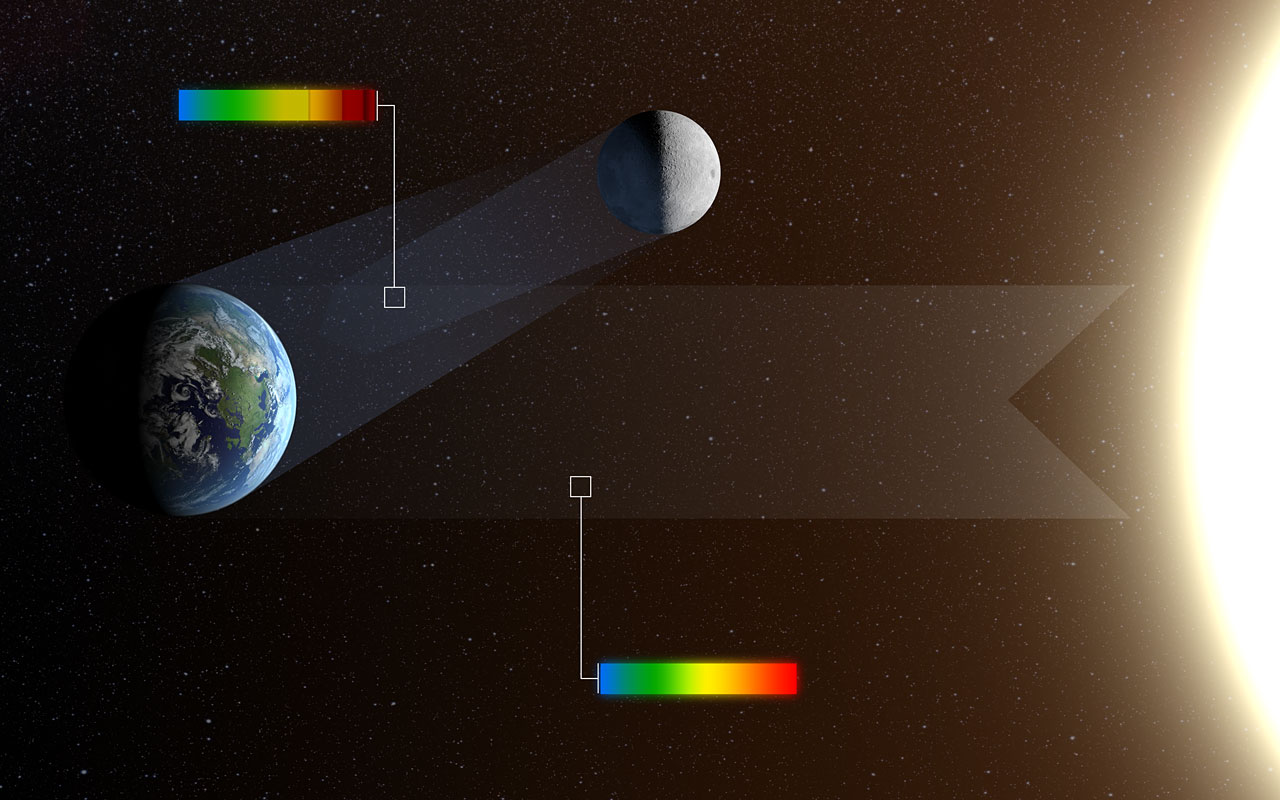 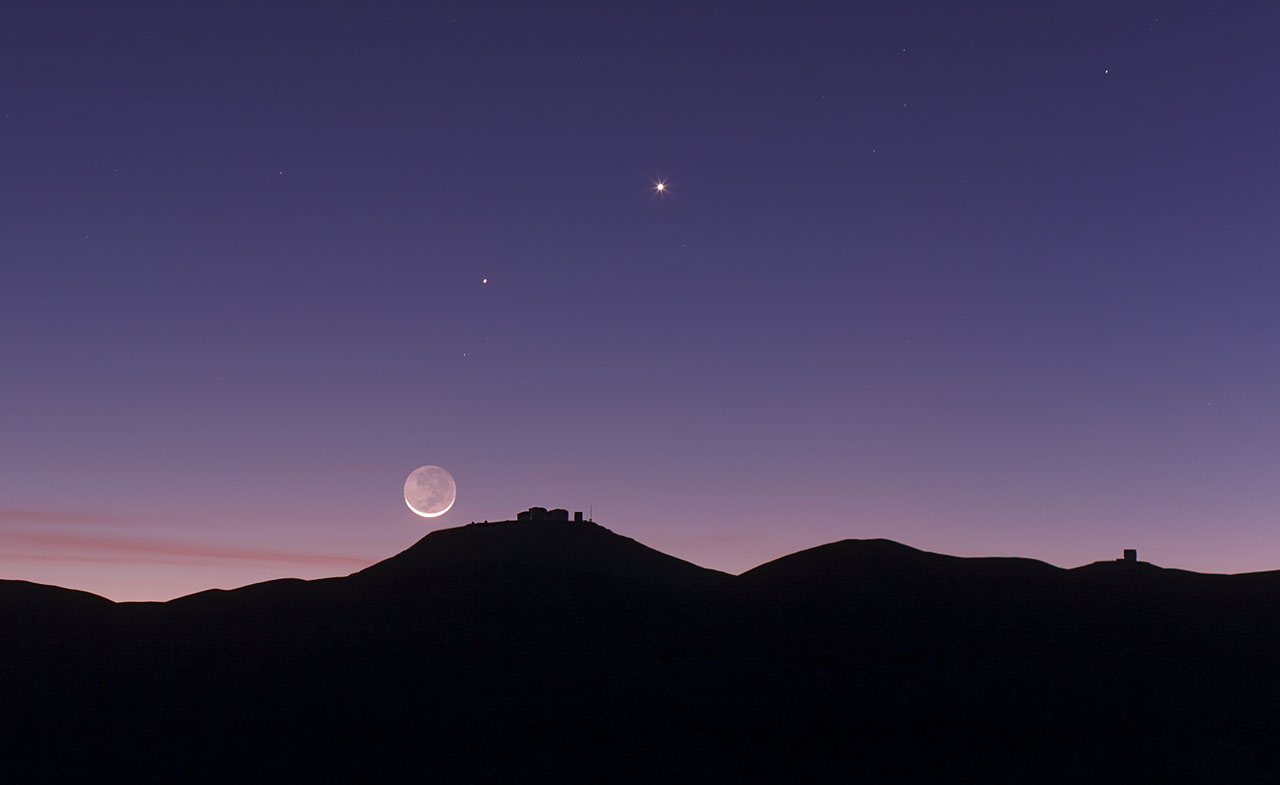 In 2011, a team led by ESO astronomer Michael Sterzik used ESO’s FORS2 instrument at the VLT to observe earthshine: their measurements were sensitive to the cloud coverage, the presence of oceans, and even vegetation, thus rediscovering life on Earth.

In a similar vein, astronomers have been able to study the spectra of light reflected off exoplanets. In 2015, a group led by Jorge Martins used ESO’s HARPS spectrograph to detect light bouncing off 51 Pegasi b, the Nobel-winning planet that Mayor and Queloz discovered back in 1995. While this so-called “hot Jupiter” is most certainly lifeless, this technique is very promising to study the atmospheres of other exoplanets.

The exoplanets whose atmospheres have been characterised so far tend to be gas giants, similar to Jupiter. Small rocky worlds like Earth are much harder to study: their atmospheres are so thin that they only block a minuscule fraction of their host star’s light. Studying them in reflected light isn’t any easier, as they are drowned in the glare of their star.

Analysing the atmospheres of these smaller worlds requires the immense light-collecting capabilities of the next generation of gigantic telescopes, such as ESO’s Extremely Large Telescope. With its 39-metre mirror and an array of sophisticated instruments, the ELT will offer new ways to better understand exoplanets.

But if you are bewildered by this complex technology don't worry: just look up to the Moon, and remember that hidden in the red glow of a lunar eclipse or the faint earthshine are the chemical clues that betray the presence of life here on Earth.