Behind the scenes at ESO: Showing you the road to the stars
What you’ll discover in this blog post:
In December 2019, astronomers announced that they had efficiently discovered and characterised planets outside the Solar System using an innovative technique. So far, the researchers have used the technique with ESO’s HARPS instrument to find six exoplanets, some of which hold the key to unlocking the geology of rocky planets. We spoke to lead researcher Carole Haswell from the Open University in the UK to find out more about the project and the implications of these discoveries.

Artist’s impression of the mass-losing giant planet DMPP-2b, which orbits the pulsating star DMPP-2 every five days. The star is viewed through a cloud of gas lost from the hot planet.
Credit: Mark A. Garlick / markgarlick.com. Science credit: Haswell / Barnes / Staab

Q. The Dispersed Matter Planet Project (DMPP) aims to find lots of new exoplanets. What motivated you to start this project?

A. The project actually grew out of some research we did a decade ago using the Hubble Space Telescope. We were looking at giant exoplanets, and found that the chromosphere of one of the host stars was missing. It seemed extremely unlikely that this star would be structured differently to every other star we know of, so we had another idea: when planets orbit close to their host star, they are heated very vigorously which makes them lose mass. We figured that some of this mass could form a gas shroud that envelops the entire planetary system and absorbs the light from the star’s chromosphere, preventing us from seeing it.

So, we had the idea that if we see a star with missing chromospheric emission, we know that there is a hot mass-losing planet present, and could actually deduce a lot of information about such a planet. In this way, we came up with a new and efficient technique to discover new low-mass planets orbiting close to their parent star.

What makes the project really special is our target star selection. Astronomers are beginning to suspect that most stars have planets orbiting them, but when we know what kind of planet a star might host, we can tailor the observations to find out about the planet much more quickly. And this is exactly what we’ve been doing here.

Q. Could you tell us a bit about how this new planet-searching technique works?

A. We searched through existing data on 6000 stars to find any that were structured like the Sun but with missing emission from their chromospheres. Of these 6000, we found about 40 that we thought could host very hot mass-losing planets. As these were all nearby stars, we guessed that these planets would have been found already if they were large and massive, so we thought they must be small, light planets. Therefore we designed observations to find them using the very sensitive HARPS instrument on the ESO 3.6-metre telescope.

Because we were expecting low-mass planets orbiting close to their host stars — and therefore orbiting very quickly — we needed to get frequent measurements of the same star to see the differences during the planet’s orbit. So we looked at each star several times a night, which is much more often than observations are usually designed.

Visiting La Silla Observatory to use the ESO 3.6-metre telescope was one of the most amazing experiences of my life. I’d used the New Technology Telescope some years ago, but because I believe that this research is the best idea I’ve had in my whole career, it was especially exciting to go this time round.

A. For this project, we are using the radial velocity method to detect planets, which means we measure how quickly the star moves towards and away from us. When a planet orbits a star, it pulls the star towards itself slightly. This means that when the planet orbits the star, the star is also executing a much smaller orbit in response. The star moves towards us while the planet moves away from us and vice versa. We can detect these changes in the star’s velocity from Earth. 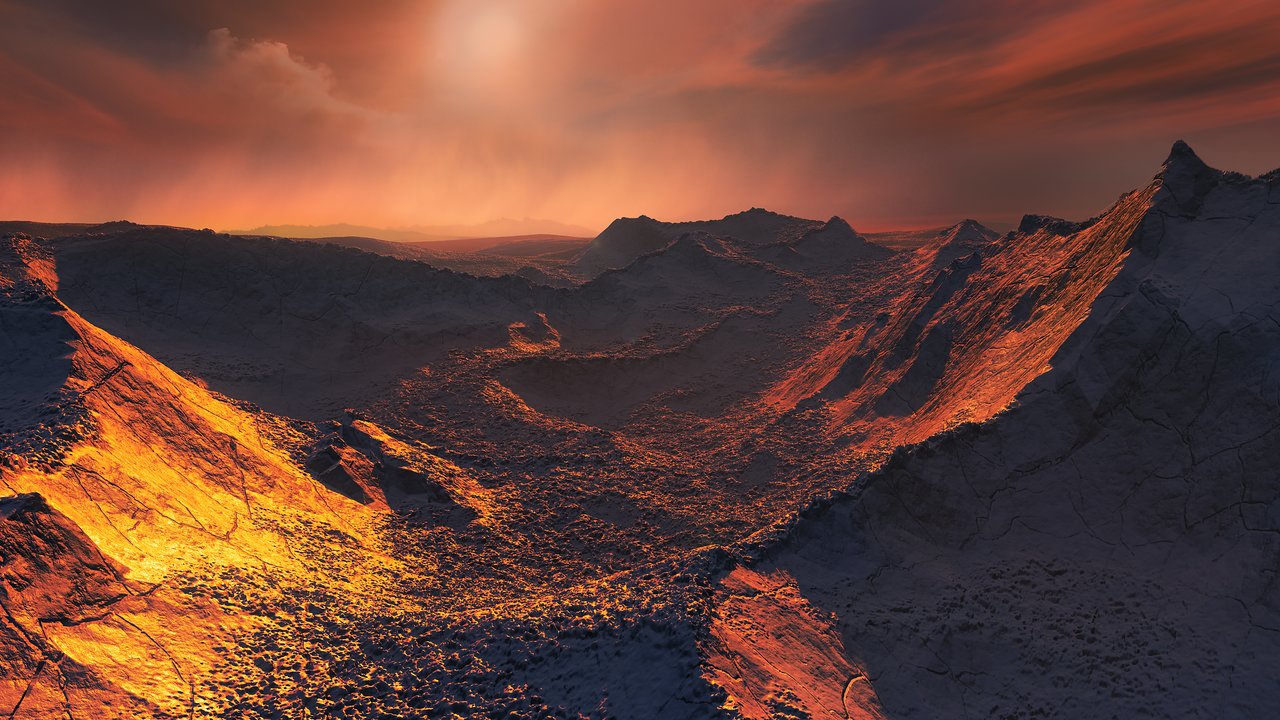 Artist’s impression of a rocky super-Earth exoplanet. DMPP will help us compare Earth’s make-up to that of other rocky exoplanets.
Credit: ESO/M. Kornmesser

We chose to use HARPS because it is by far the best general user radial velocity instrument that we were allowed to propose for — it can measure the velocity of a star with a precision of less than one metre per second! It’s fantastic to be in an ESO Member State with the opportunity to use such an instrument.

Q. So why do you think it is important for us to search for new exoplanets?

A. One of the biggest human questions is about our place in the Universe; how special the Solar System is and how special Earth is. And one of the big pushes in exoplanet science is to extend discovery methods to be able to see planets like Earth orbiting their host stars at the same distance that Earth orbits the Sun. The idea is that these Earth-like planets could be good candidates for hosting life.

But it’s also important to find a whole range of planetary systems to see how planets form and evolve and to determine how typical the Solar System is. The planets we are studying through this project aren’t similar to our neighbours in the Solar System, but it is nonetheless important to study them because it gives us the opportunity to better understand a different type of planet, which is important to generally understand the geology and geochemistry of planetary systems.

With further study of the systems we’ve found to host exoplanets, we could work out the chemical composition of the gas shroud, which would reveal what type of rock the surfaces of these planets are made of. This will help us pin down how planets are built, and whether the Earth is normal.

With further study of the systems we’ve found to host exoplanets, we could work out the chemical composition of the gas shroud, which would reveal what type of rock the surfaces of these planets are made of. This will help us pin down how planets are built, and whether the Earth is normal.

Artist’s impression of the DMPP-3Ab planetary system. The dim, red star in the upper left is a very low mass star, DMPP-3B, which can only just sustain hydrogen fusion. The brighter, Sun-like star DMPP-3A has a hot 2–3 Earth mass planet in a seven–day orbit. The system is shrouded in gas lost from the hot planet DMPP-3Ab.
Credit: Mark A. Garlick / markgarlick.com. Science credit: Haswell / Barnes / Staab

Q. How has the DMPP been going so far? Have you had any surprising discoveries?

A. We started making observations in 2015, and we’ve already discovered six exoplanets using relatively little telescope time compared to more traditional methods. One of the most interesting stars we looked at so far actually turned out to be two stars! The tiny second star in the binary system is right at the lower limit of hydrogen burning, meaning it is just massive enough to be a proper star like the Sun. If it had slightly less material, it would be a brown dwarf. This star is faint and had therefore never been detected before. Finding this extremely low mass star was interesting in its own right, but we also found a planet in this system that is 2–3 times the mass of Earth and orbits the larger star in just seven days, which is unusually quick. The planet doesn’t fit with our theories of planet formation because the smaller star’s presence means there wouldn’t have been enough rocky material to form the planet where we see it. The second star must have affected the planet’s orbit, somehow pushing it closer to the larger star.

We would really like to study this system in more detail; if we can get more radial velocity data, we could see if there are any other planets, pin down the properties of the planet we’ve already discovered, and look at the atmosphere of the smaller star to see how it changes as it gets close to the larger star.

Q. Are there any challenges that you’ve had to overcome?

A. For many of our target stars we have detected more than one orbiting planet, so it took us a while to disentangle the signals from each other to figure out the exact number of planets and their orbital periods. This meant it was longer than expected before we could publish our results, so the committee that allocates telescope time started becoming sceptical and we had to persuade them that our research really is worthwhile. We’ve now published several papers on our discoveries, and we were allocated more time to continue the project — both to look at more systems and to investigate the most interesting ones in more detail. Unfortunately these observations couldn’t take place because of the closure of the observatory due to COVID-19, but we are really keen to continue as soon as it is safe to do so!

Carole Haswell is Professor of Astrophysics and Head of Astronomy at The Open University , which is the largest University in the UK, and operates through supported distance learning. As part of her teaching duties, Carole published a textbook called “ Transiting Exoplanets ” in 2010, and in 2019 launched a maths-light free online course called “ An Introduction to Exoplanets ”. She has co-authored about 140 scientific papers on exoplanets and accretion astrophysics. She serves on the European Space Agency’s Science Advisory Team for the ARIEL Mission which will perform spectroscopy of transiting exoplanets. She did her first degree at the University of Oxford, and her PhD at the University of Texas at Austin.