Behind the scenes at ESO: Showing you the road to the stars
What you’ll discover in this blog post:
Part of ESO Headquarters in Garching, Germany, is currently in a frenzy of activity as we prepare to open the ESO Supernova Planetarium & Visitor Centre in April 2018. This cutting-edge free astronomy centre is equipped with a 14-metre planetarium dome and an amazing exhibition that takes visitors on a journey to the stars. It’s a lot of work to install a planetarium system from scratch, but to engineer Max Rößner, the ESO Supernova is like a giant playground.

A: I’d say that I am the Systems Engineer for the ESO Supernova planetarium. I concentrate on the technical implementation of the planetarium, integrating the projection and multimedia systems. Sometimes I also work on the content — such as the shows and night sky tours that will be played on the dome. There is quite a lot of pressure, as at the moment I am the only person who entirely understands the planetarium system, so in a way the planetarium implementation depends on me.

Q: How do you know so much about planetariums?

A: I’ve been working in planetariums for most of my life. I started presenting planetarium shows when I was about 10 or 11 in a small planetarium near Augsburg, which is about an hour from Munich, Germany. It is run by an association of volunteers and it was my first taste of these magical places. Of course in the beginning I worked in a voluntary capacity, but it also helps now that I am an engineer.

Q: How is the ESO Supernova’s planetarium different to those you have previously worked in?

A: It’s very different. The most obvious visible difference is that the ESO Supernova has an inclined dome — it is tilted by 25 degrees to allow for a better viewing experience. Overall, it’s a complex project, because we are actually implementing two different planetarium systems from Zeiss and Evans & Sutherland (E&S). The market of planetarium systems is a packed field, including Zeiss, E&S, and numerous others. All of them have their pros and cons. Our system looks a lot like a DJ deck — we have an audio mixer, spotlights, and lots of effects! 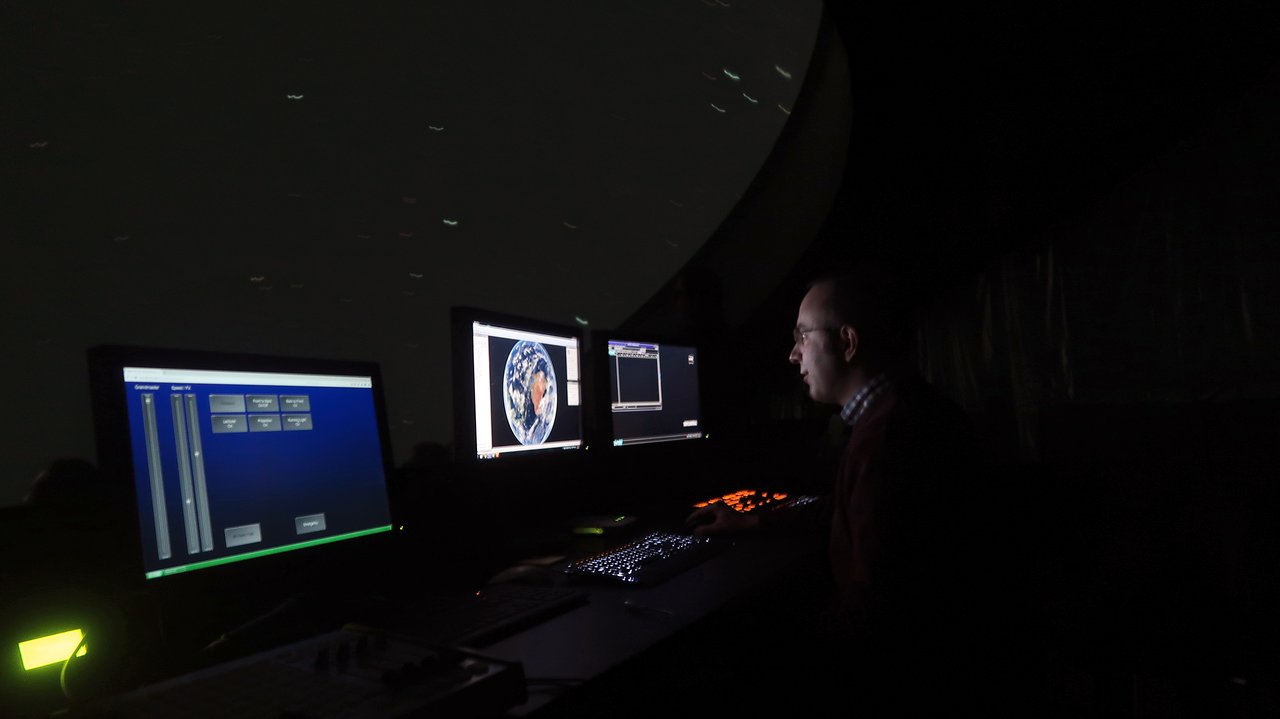 Max Rößner at the control board of the newly installed planetarium at the ESO Supernova Planetarium & Visitor Centre.
Credit: ESO

Q: What kind of experience are you aiming to give visitors with these awesome systems?

A: There is a joke in the planetarium world that people go to planetariums twice in their life: as a child and with their children. In the past, presenters generally gave a tour of the starry sky, including the Big Dipper and other famous constellations, and they would also point out some planets. But to match the expectations of audiences today, we use more advanced technology to create the kinds of shows that can also be continually updated to match modern science, and that are more personal and changeable.

We want to avoid presenting a Hollywood-style film that has a clear beginning and neatly wrapped-up ending, so visitors just come, watch it and leave. Instead we want to create a dialogue with the audience, presenting each show with a more personal flair so each one is different. This can evolve depending on who is in the audience — such as their age or their background — and the questions people have throughout the show can also influence its direction. 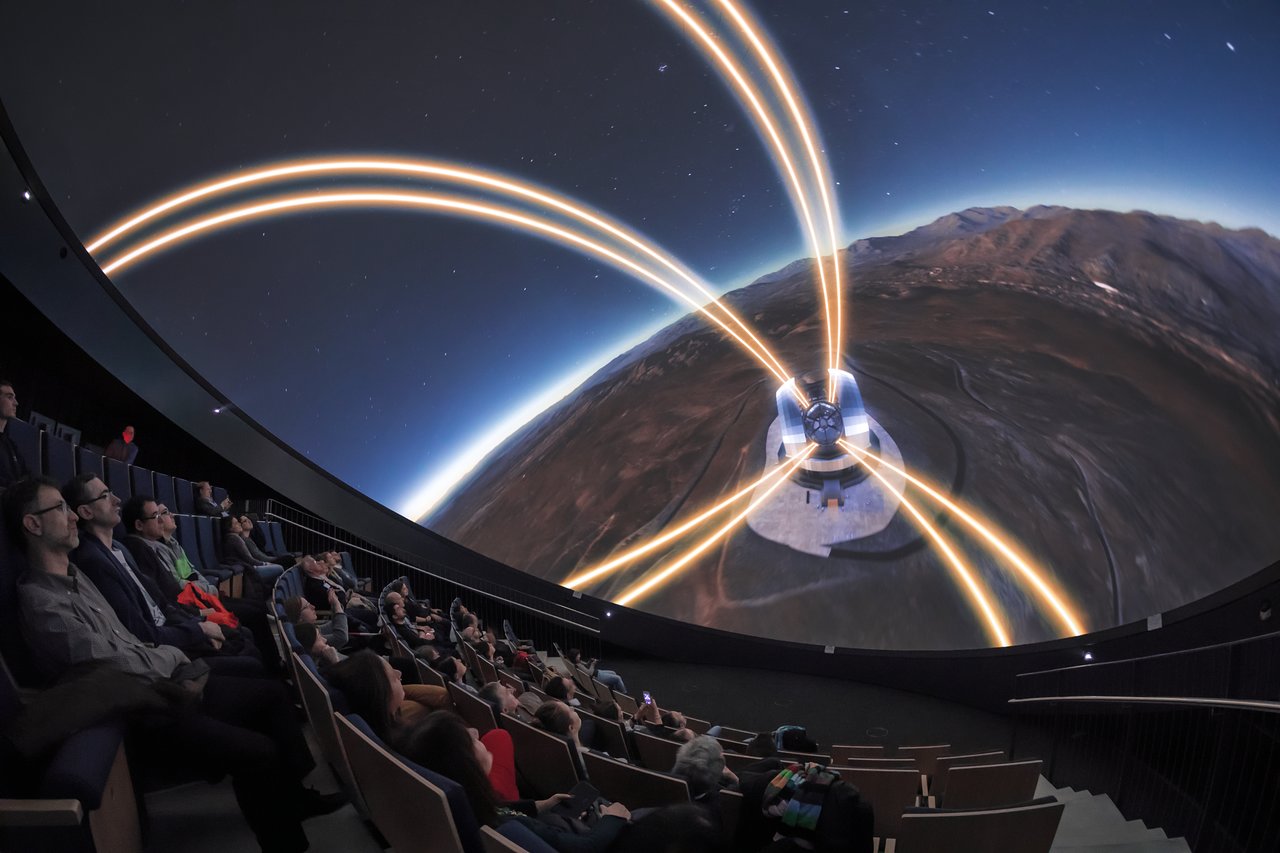 The ESO Science Outreach Network (ESON) visited the ESO Supernova in 2017 and had a sneak-peek of some of the delights to come, learning more about the Extremely Large Telescope (ELT) on a test fulldome show.
Credit: ESO/P. Horálek

Q: You mentioned that the dome is tilted — why?

A: This is a philosophical question. A tilted planetarium dome does make it a little more difficult to orient the audience, as people are used to using the Earth’s horizon as a reference point for celestial objects. For example, it is a little harder to demonstrate that the Sun rises in the east and sets in the west, because the sky itself isn’t tilted! But with the planetarium seats, which are raised up ‘diagonally’ on a slope like cinema seats, your brain does seem to correct for this.

An advantage of the tilted dome is that people don’t have to look up very far, so they can look at the dome in a comfortable way and feel fully immersed in the show. 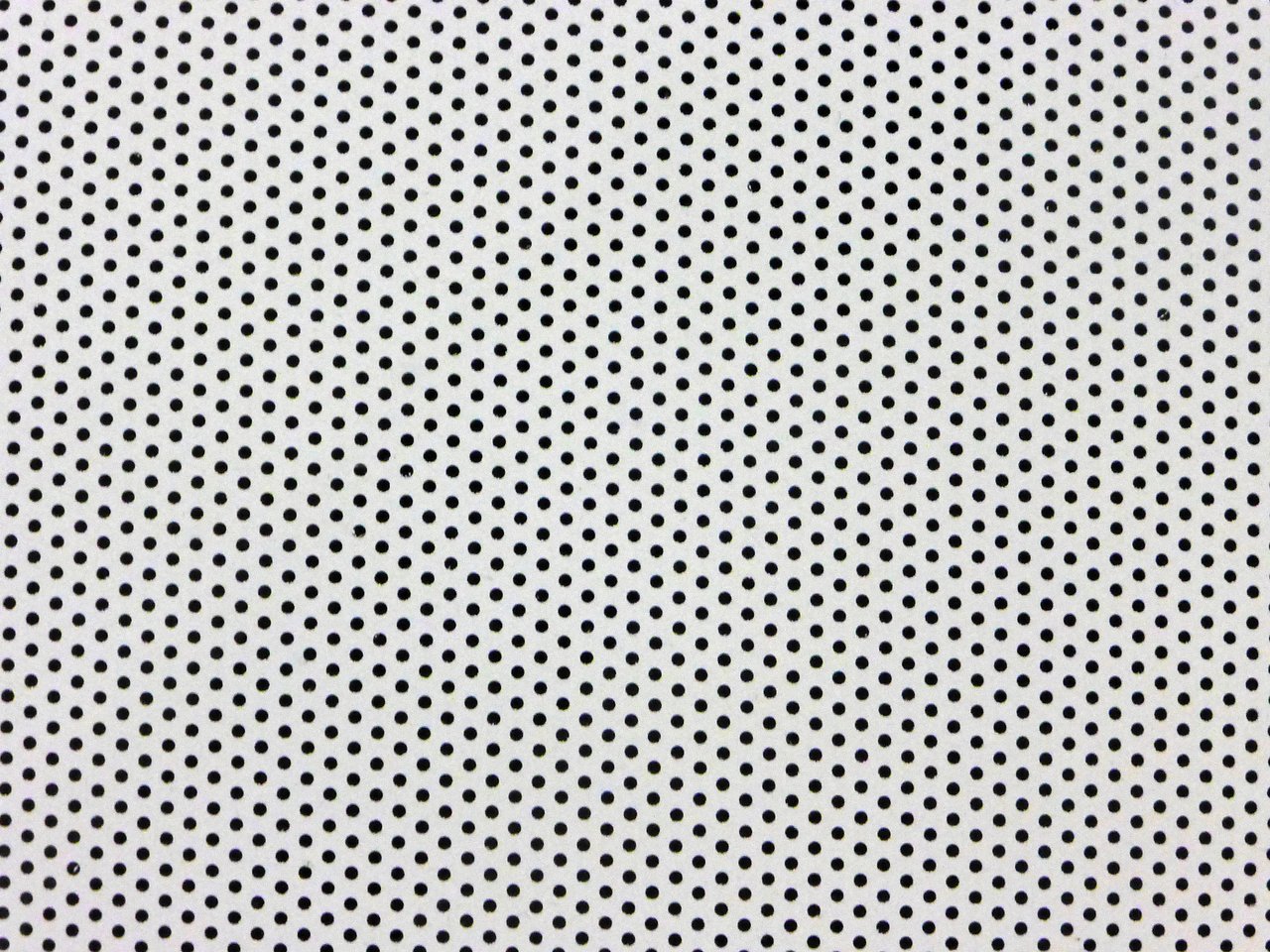 The material of the planetarium dome in the ESO Supernova is perforated with small holes.
Credit: Max Rößner / ESO

Q: The dome has yet another curious feature: it’s filled with small holes. How come?

A: There are a few technical and practical reasons for this:

Q: How is content made differently for the curved screen of the planetarium?

A: There are two ways to develop content for a planetarium. Firstly, to create films with a fisheye-like representation so they display correctly on the dome. In order to achieve this, a film is first split into the various projection fields, and then warped to compensate for the curved nature of the dome. These little pieces of the frame are then stored on individual PCs and fed to the different projectors.

It’s a little like Google Maps, except with time, and showing the Universe

Live shows are another type of content. They are created and rendered on the spot, at the moment you present them. For example, we can show the sky as the visitors would see it now, outside. Tomorrow the Moon will change its position a little, and the Sun will set a bit later as we head towards spring, so we can adjust for these changes every day. This is a native functionality of Digistar, which is the planetarium system created by E&S. It’s a little like Google Maps, except with time, and showing the Universe. With just a few months until the opening of the ESO Supernova Planetarium & Visitor Centre in spring 2018, the interior of the Centre is coming together.
Credit: ESO/P. Horálek

Q: What’s the day-to-day work like in a planetarium?

A: It’s great! I love having some freedom in making design decisions and seeing those decisions realised. It’s exciting to see something you have planned and worked on for such a long time coming into reality, and to know that you are a big part of it.

Q: What has been the biggest challenge so far?

A: We’ve faced so many challenges. One memorable moment was when we were trying to test the software, but nothing happened. Nothing turned on, and we just saw a black sky above us. Of course, we panicked — but it turned out that we had left the dust caps on the projectors! So luckily, that didn’t turn out to be too challenging to fix. Even specialists make mistakes!

An actual challenge was to raise awareness about our operational requirements. For example, we had to clearly communicate to the architects that we need a low horizon, room for equipment, extra sockets, space in the server room, and so on. Essentially, we were concerned about the practical side of running a planetarium with limited manpower and how that would be balanced with the architectural priorities of design and aesthetics.

Then there’s the pressure because the software is absolutely fundamental to the working of the planetarium. One of the most difficult things has been getting the two planetarium systems to work together in a unified way. We need the added computational power of the second system to realise our operational goals.

Of course, another challenge is that funding has been a limiting factor in some ways. Any project is easier when you have boundless amounts of money, but that’s not the reality here — especially since the ESO Supernova will be a free, open-source visitor centre. 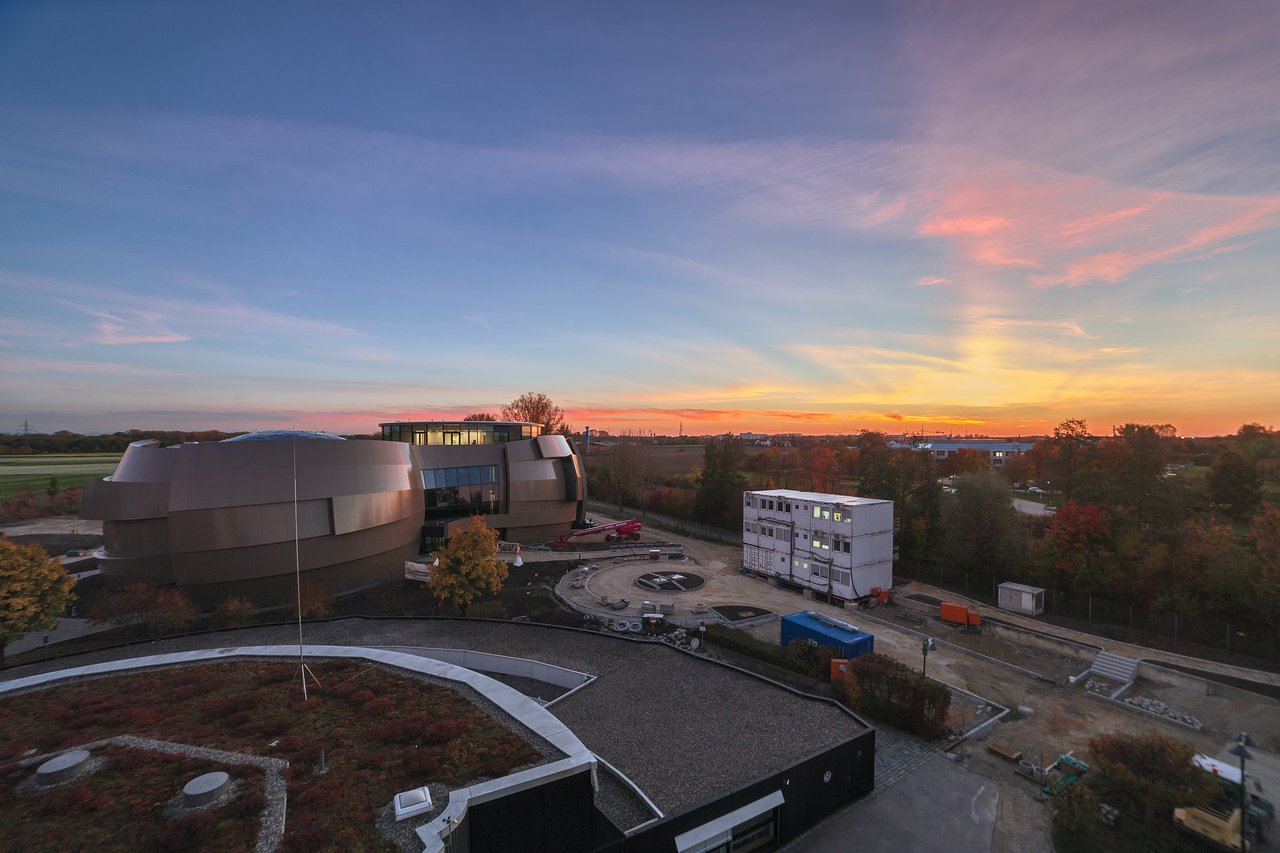 Q: Another exciting part of the ESO Supernova project is the Data2Dome system. Tell us more about that.

A: Up until now, planetariums have struggled to present really up-to-date content. First of all the content — such as new films, video clips or images — has to be found on the internet, then downloaded, then uploaded to the planetarium system. A script then has to be written to present alongside the content. This means it can take weeks for new research findings from around the world to reach planetariums’ audiences. Other mediums are way faster, like the internet, TV, and newspapers. So there was a problem: a planetarium is meant to be the competence centre of astronomical knowledge in a community, but it was lagging behind.

We wanted to streamline the process of bringing research from astronomers to audiences around the world. ESO’s outreach department collaborated with E&S and the International Planetarium Society to come up with a technical standard: Data2Dome.

Essentially, this helps scientific organisations publish their content in such a way that it enables planetarium vendors to download the content directly into their software. Manually shuffling and downloading data is bypassed. NASA, ESA, ESO and many others can directly stream their content into planetariums worldwide. It’s a free and open standard, first implemented by E&S. In particular, it’s great for smaller planetariums that may not have the time to continuously create new content.

People are already using this software around the world — Data2Dome is streaming content to planetariums as we speak.

Q: What are you looking forward to most once the ESO Supernova opens?

A: It will be great to have the planetarium fully working and engaging with the audience. I feel the planetarium is my brainchild, so seeing it finally come to life will be amazing.

Planetariums hold a certain fascination that has never left me. I still get goosebumps

Q: You’ve been working in planetariums for so many years — do you still feel excited when a show begins?

A: Of course. This space holds a certain fascination that has never left me. I still get goosebumps. Emotion is a key part of the planetarium experience: shows are not just meant to teach you, but to touch you. When you think about it, the entire known Universe is stored in the computers downstairs at the ESO Supernova...so in a small dome on the edge of a city in Germany, we can leave Earth and travel to a different part of the Universe. 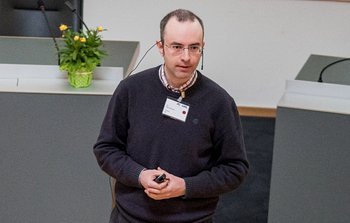 Max Rößner is a PhD electrical engineer who has been working in the planetarium field since 1994. In addition to planetarium display systems, his research interests are in fibre optics and spaceflight engineering. At ESO, he is responsible for the integration of the projection and multimedia systems of ESO's upcoming planetarium. Furthermore, he was involved in the development of Data2Dome, a data dissemination system to broadcast up-to-date astronomical content to planetarium systems worldwide.