Behind the scenes at ESO: Showing you the road to the stars
What you’ll discover in this blog post:
Is it a star? Is it a planet? No, it’s a brown dwarf! More massive than Jupiter but smaller than the Sun, these fascinating astronomical objects are difficult to observe due to their dim nature, but studying them can tell us a lot about our Universe. In this blog post, astronomer and brown dwarf expert Koraljka Muzic discusses her latest research, which led her to discover something surprising about how brown dwarfs form.

Q: Firstly, what exactly is a brown dwarf, and why did you want to study them in this context?

The big question is: are brown dwarfs formed like stars or like planets?
A: For a long time, people have known about two well-separated classes of objects — stars and planets. Brown dwarfs are kind of a missing link between them: in terms of mass, they are somewhere between stars and planets. The transition from a brown dwarf to a star happens at 0.075 solar masses (around 80 times the mass of Jupiter), but setting a boundary between brown dwarfs and planets isn’t so straightforward. The smallest brown dwarfs discovered so far are about five times as massive as Jupiter, similar to some giant exoplanets. But these brown dwarfs don’t orbit any star; we call them free-floating planetary-mass objects.

For us, the big question is: are brown dwarfs formed like stars or like planets? While most of the evidence today points to a star-like formation scenario for more massive brown dwarfs, we’re still questioning how low-mass brown dwarfs form; they could be formed in a similar way as giant planets.

Q. The existence of brown dwarfs was only confirmed about 20 years ago. How far has our knowledge of them developed since that discovery?

A: Quite a bit! Brown dwarfs have existed in theory since the 1960s and were observed for the first time in the 1990s. Since then, we’ve discovered a few thousand of them with progressively cooler effective temperatures, leading to the definition of new stellar types.

But observing brown dwarfs is challenging because they’re very faint and very cool, which means we’re always pushing the limits of instrument sensitivity. Our progress is strongly linked to technological development — firstly, we saw this with the arrival of infrared instrumentation that could study cool, young objects surrounded by dust. Nowadays, technological progress mostly involves building bigger mirrors on the ground and in space to detect fainter objects that are even less massive and more distant. The Milky Way contains billions of brown dwarfs, so there's still a long way to go!

Q: What’s our current understanding of how brown dwarfs form?

A: We think that massive brown dwarfs are formed like stars, through the gravitational collapse of molecular clouds. This collapse causes the temperature at the cloud’s core to soar, and at a few million degrees, hydrogen starts fusing into helium — a star has been born! But if the object is not massive enough, the collapse will stop before it reaches the hydrogen fusion temperature, and the result is a brown dwarf.

The key point for our research is that after gravitational collapse stops, the brown dwarf keeps cooling down and becoming fainter and fainter — so we want to study them while they're young and relatively bright. This is one of the reasons we looked for brown dwarfs in a star forming region: the young cluster RCW 38. 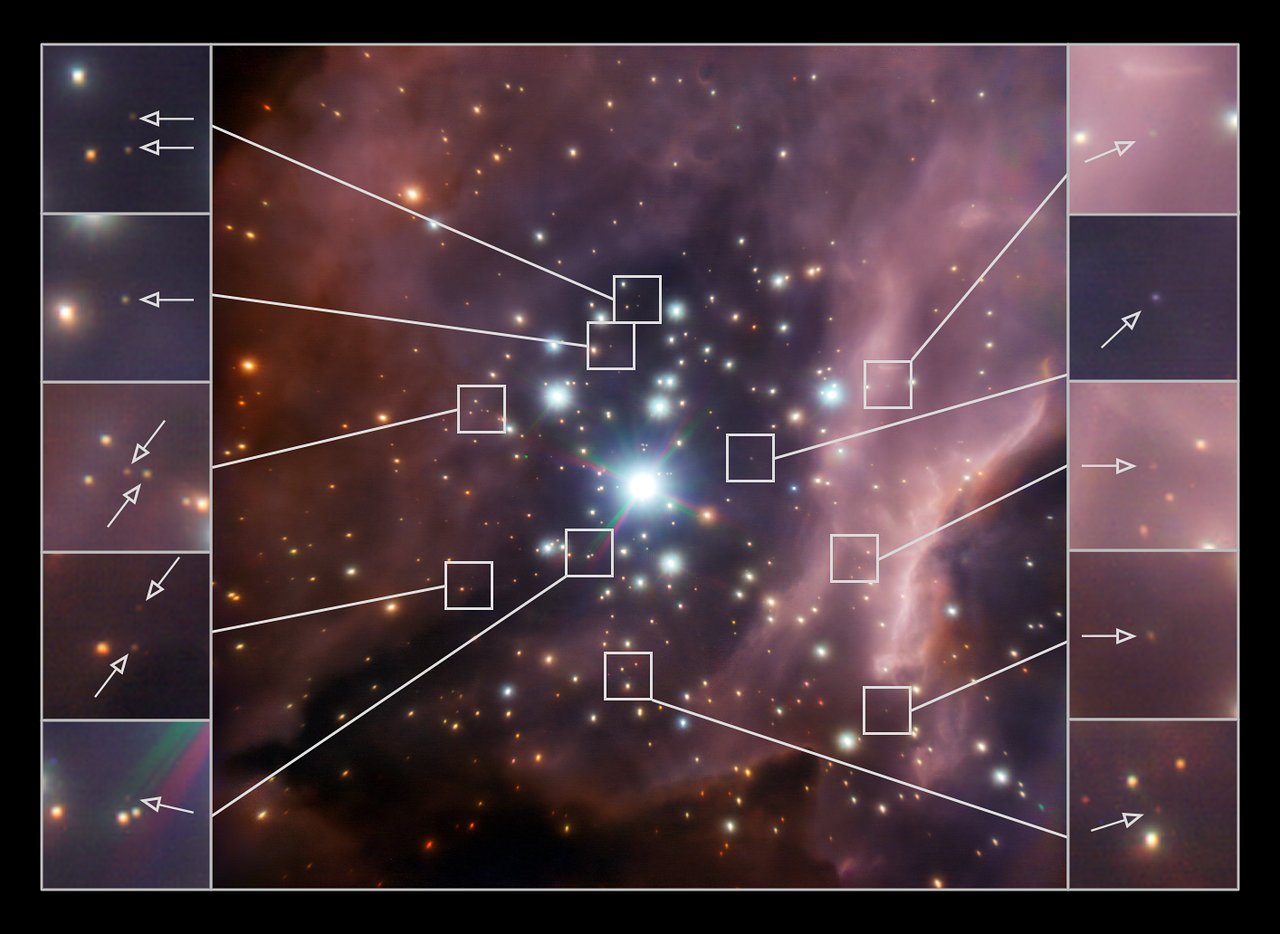 Q: What were the other reasons for choosing to observe RCW 38?

A: Several theories of brown dwarf formation predict that in places where lots of stars are packed in close together, more brown dwarfs form relative to stars. Brown dwarfs can also form close to massive stars — these stars blast a growing pre-stellar core with ionising radiation, evaporating their outer layers and leaving a small fragment behind: a brown dwarf. So in our survey SONYC (Substellar Objects in Nearby Young Clusters), we extensively studied brown dwarfs in several nearby star-forming regions in the near-infrared. These are excellent spots for studying young brown dwarfs, but overall they’re not very dense and they contain very few massive stars.

We wanted to observe a cluster that’s significantly different to these regions in order to compare different kinds of environments. That's how we decided on RCW 38 — it’s probably the most massive and densest cluster containing brown dwarfs detectable with our current technology. We went on to investigate RCW 38 using NACO on ESO’s Very Large Telescope.

The result was unexpected because it didn’t match theoretical predictions

Q: What did you find out? Were your results surprising?

A: We found that RCW 38 forms approximately one brown dwarf for every two newborn stars, which is very similar to what we found in less dense clusters — for example, in NGC 1333. NGC 1333 is about 10 times less dense than RCW 38 but the number of brown dwarfs formed compared to stars seems to be the same as in RCW 38. This allows us to estimate that the Milky Way contains at least between 25 to 100 billion brown dwarfs! And it’s likely that RCW 38 contains even more less massive, fainter brown dwarfs that we couldn’t spot.

The result was unexpected because it didn’t match theoretical predictions, and was especially surprising because previous observations hinted that the stellar density should affect the number ratio of brown dwarfs to stars...but in this case, it didn’t!


Q: What excites you most about your area of research?

A: I love thinking about the next steps we could take to give us new information about the properties of brown dwarfs, or details about their formation. I get really excited when a new opportunity arises to do something that we simply couldn’t have done before, like use a new instrument or a state-of-the-art technique. Recently, there was a call for science research proposals for the NASA/ESA/CSA James Webb Space Telescope (JWST). Thinking that in just a few years we might be able to use this fantastic new instrument to observe Jupiter-like free-floating objects in young clusters is just incredibly exciting!

Q: What are the next big questions in this area of astronomy?

A: One of the big questions I'm particularly interested in is how low a brown dwarf’s mass can be — is there a limit at which brown dwarfs stop forming? This could tell us more about how these objects are born. The lowest mass brown dwarfs we observed in young clusters are only about five times more massive than Jupiter, but to see lower masses we’ll have to wait for the next generation telescopes such as the JWST and ESO’s Extremely Large Telescope. Another big question is whether brown dwarfs can host planetary systems. Observations at longer wavelengths, in mid-infrared and submillimetre, reveal that they can be surrounded by discs. The lowest mass object observed to host a disc is OTS44, a young brown dwarf of only about 10–15 Jupiter masses. And, fun fact: when the VLT took the first image of an exoplanet in 2004, it was a planet that was orbiting a brown dwarf!

Q: To study RCW 38, you used the Very Large Telescope at ESO’s Paranal Observatory in Chile. What was it like to work at Paranal?

A: I worked at Paranal for three years as an ESO Fellow. Observatories in general are wonderful places, and although it can be pretty tiring, I love spending time at them because you glimpse the many complexities that lie behind astronomical observations. Building and running an observatory is an enormous effort, involving a huge number of people with different skills and expertise. It's like a giant mechanical clock where everything has to work in perfect order to ensure astronomers around the world get the best data possible. 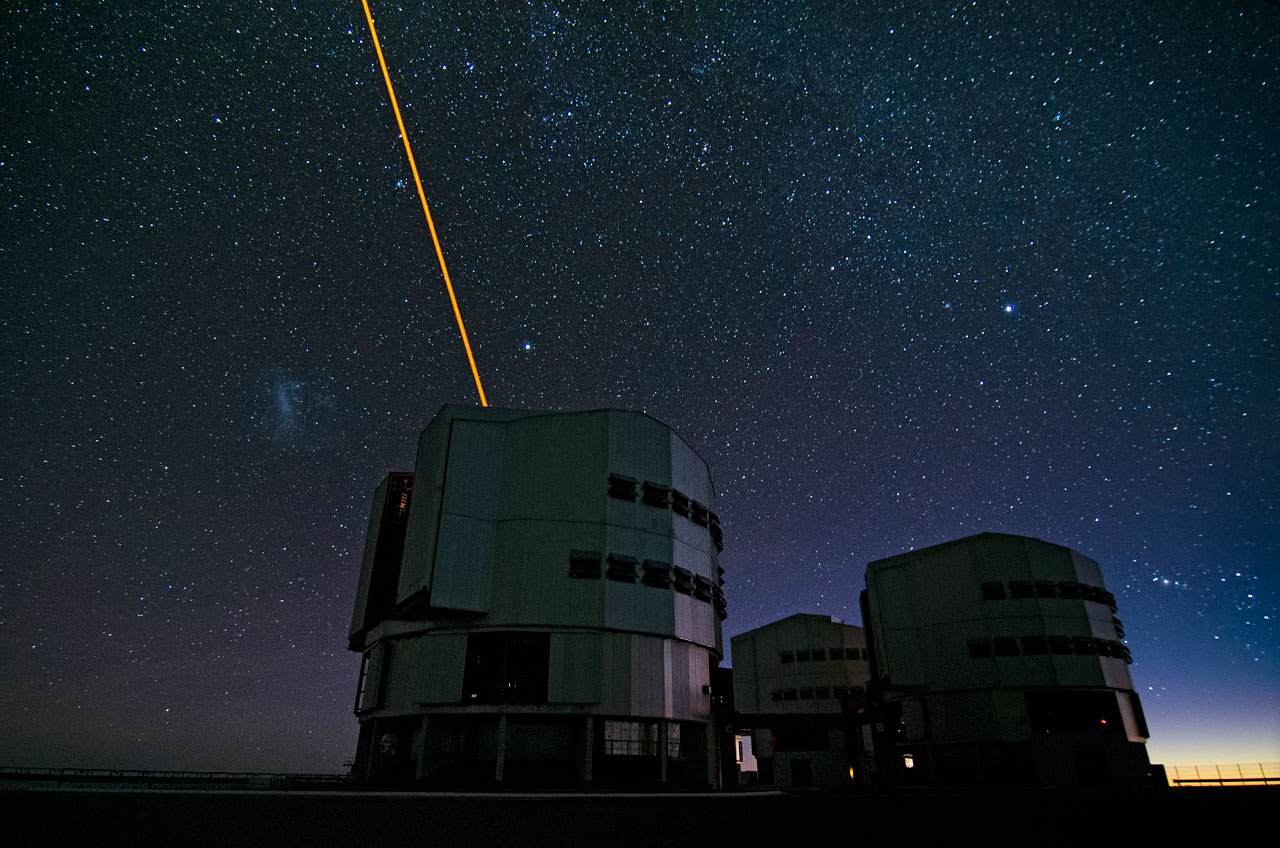 On that note, I would like to give credit to all my colleagues who co-authored this research paper. This work would definitely not have been possible without the efforts of the entire team. A big thank you!

Koraljka Muzic is a research scientist at CENTRA, University of Lisbon, Portugal. She obtained her PhD at the University of Cologne, Germany, and spent 3 years as an ESO Fellow in Chile, supporting the operations at Paranal. Her research focuses on brown dwarf and low-mass star formation.