REOSC Delivers the Best Astronomical Mirror in the World to ESO

On December 14, 1999, REOSC , the Optical Department of the SAGEM Group , finished the polishing of the fourth 8.2-m main mirror for the Very Large Telescope (VLT) of the European Southern Observatory. The mirror was today delivered to ESO at a ceremony at the REOSC factory in Saint Pierre du Perray, just south of Paris.

The precision of the form of the mirror that was achieved during the polishing process is 8.5 nanometer (1 nanometer = 1 millionth of a millimetre) over the optical surface. This exceptional value corresponds to an optical resolution (theoretical image sharpness) of 0.03 arcseconds in the visible spectrum. This corresponds to distinguishing two objects separated by only 15 cm at a distance of 1000 km and will allow to detect astronomical objects that are 10,000 million times fainter than what can be perceived with the unaided eye.

This impressive measure of quality, achieved by the REOSC teams during much painstaking work, implies that this VLT mirror is the most accurate in the world. In fact, all four 8.2-m VLT main mirrors polished by REOSC are well within the very strict specifications set by ESO, but this is the best of them all.

The celebration today is the successful highlight of a contract initiated more than ten years ago, during which REOSC has perfected new polishing and control techniques - innovations improved and developed in a unique workshop dedicated to these giant mirrors. These methods and means are directly applicable to the new generations of segmented mirrors that are now being developed for astronomy and space observations. They are, in this sense, at the foremost front of optical technology.

REOSC, the Optical Department of the SAGEM Group , is specialised in the study and realisation of high-precision optics for astronomy, space, defence, science and industry. For earlier information about the work on the VLT mirrors, cf. eso9515.

The SAGEM Group is a French high-technology group. It employs about 15,500 people - more information is available at URL: www.sagem.com.

Information about the ESO and the VLT project is available via the ESO website: www.eso.org.

The polishing at REOSC of the main mirrors for the four VLT Unit Telescopes has been a major industrial feat. Here are some of the main dates:

[1] A Press Release on the REOSC event and the delivery of the fourth VLT main mirror to ESO is also published by SAGEM (in French and English). 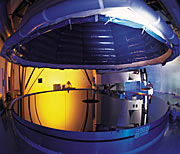 PR Image eso9952a
The polished fourth 8.2-m VLT mirror at REOSC
Send us your comments!
Subscribe to receive news from ESO in your language
Accelerated by CDN77
Terms & Conditions